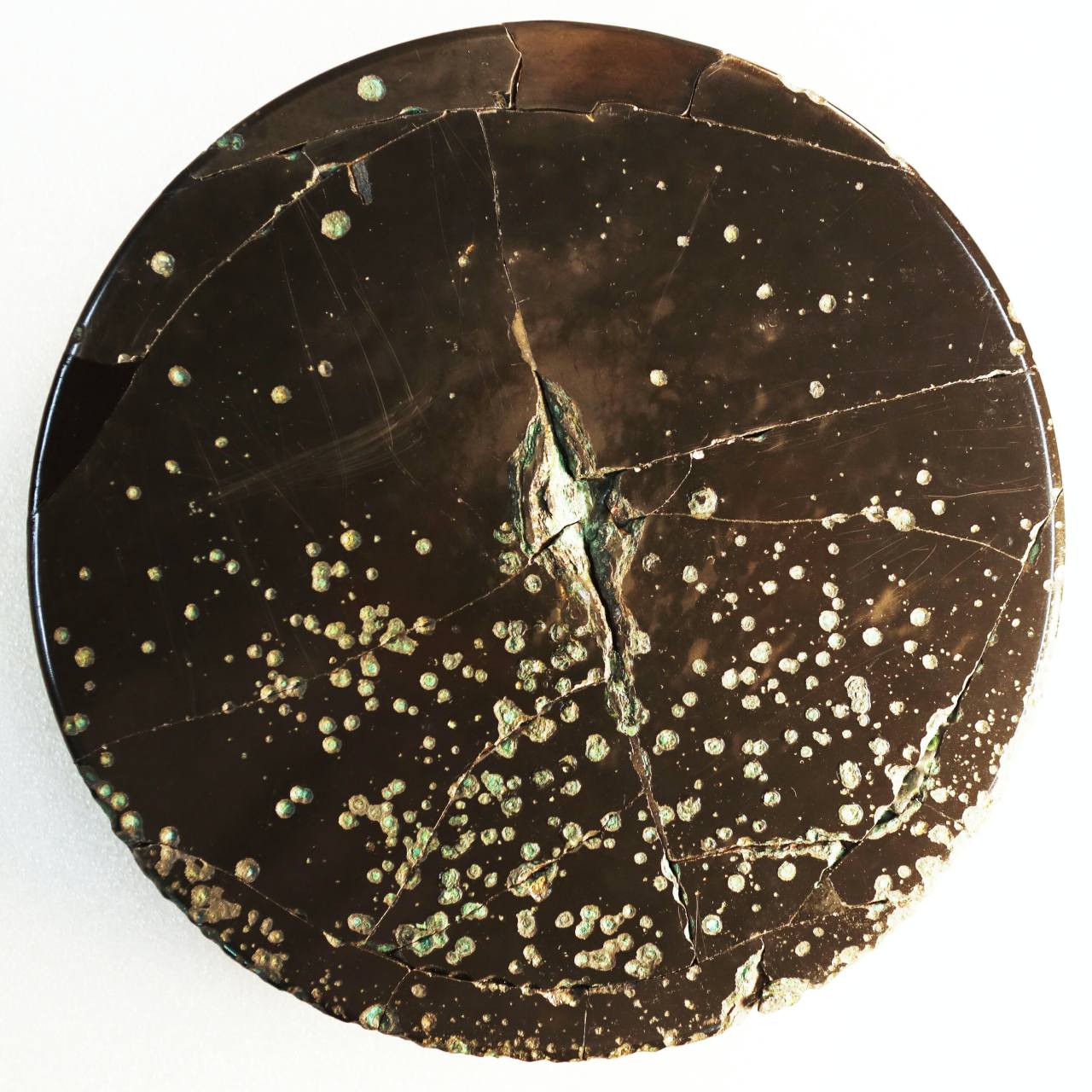 The shiny side of the Korean National Treasure No. 141 - Bronze Mirror with Geometric Designs -- has impact damage on it. The mirror is 212.8mm wide and 212.1mm tall. The bronze mirror with fine linear design and a pair of knobs, was photographed with special permission at the Korean Christian Museum at Soongsil University in Seoul, Korea. (Photo ©2020 Hyungwon Kang)
For humans, the Bronze Age meant metal weapons, farming tools, and means to sustain large enough populations with an organized labor force which enabled construction of lasting monuments such as dolmens.

East Asia, especially in ancient Korea, must have been a happening place in the Bronze Age as there are more dolmens in Korea than anywhere else in the world.

The largest and the most famous bronze mirror with fine lines, South Korea’s National Treasure No. 141, Bronze Mirror with Geometric Designs, or Jeongmungyeong in Korean, was found serendipitously in the early 1960s by Korean army recruits who were digging trenches at the Nonsan Republic of Korea Army Training Center.

The bronze mirror was first sold to an antique collector, the “usual laundering practice of trading antiques in Korea,” before the Korean Christian Museum at Soongsil University acquired it.

The bronze mirror is shattered into many pieces, apparently from the impact of an iron pick‘s sharp tip piercing the mirror from its shiny side.

The other side shows finely engraved geometric lines and has two knobs where a chain or cord would have been passed through to form a necklace.
The round shiny mirror is considered to have represented the Sun, a heavenly source of mythical power in ancient times. Researchers believe a leader or a priest/priestess would have worn the mirror to reflect sunlight from the chest.

Researchers believe the 21cm diameter Bronze Mirror with Geometric Designs was made during the height of cutting-edge Bronze Age technology, when Korean civilization was transitioning into the early stage of the Iron Age. The mirror has an incredible number of more than 13,000 fine lines which are only 300,000 nanometers thick, a size thinner than human hair. 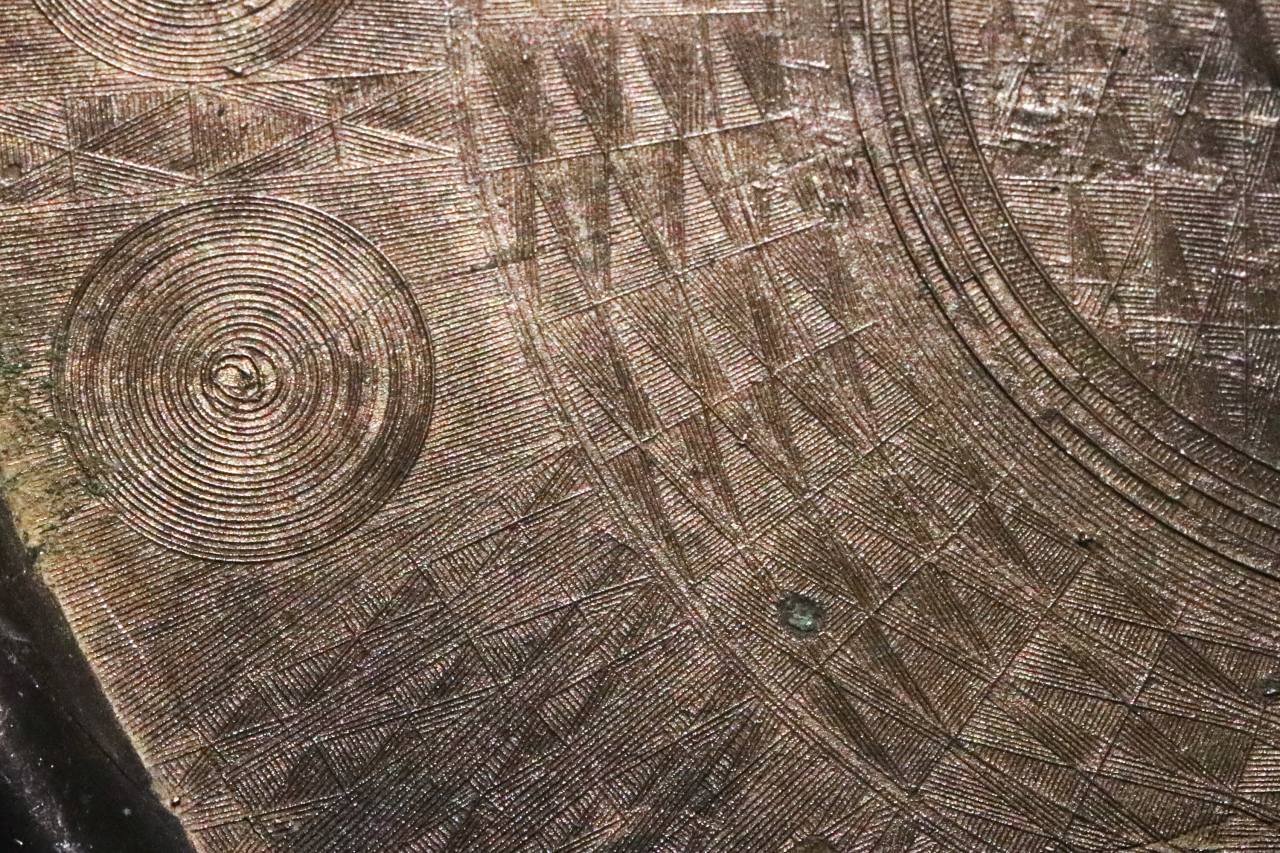 A close-up view of Bronze Age nanotechnology. The Korean National Treasure No. 141 - Bronze Mirror with Geometric Designs has over 13,000 lines on its 212.8mm wide and 212.1mm tall surface. The Bronze mirror was photographed with special permission at the Korean Christian Museum at Soongsil University in Seoul, Korea. Photo (Photo ©2020 Hyungwon Kang) 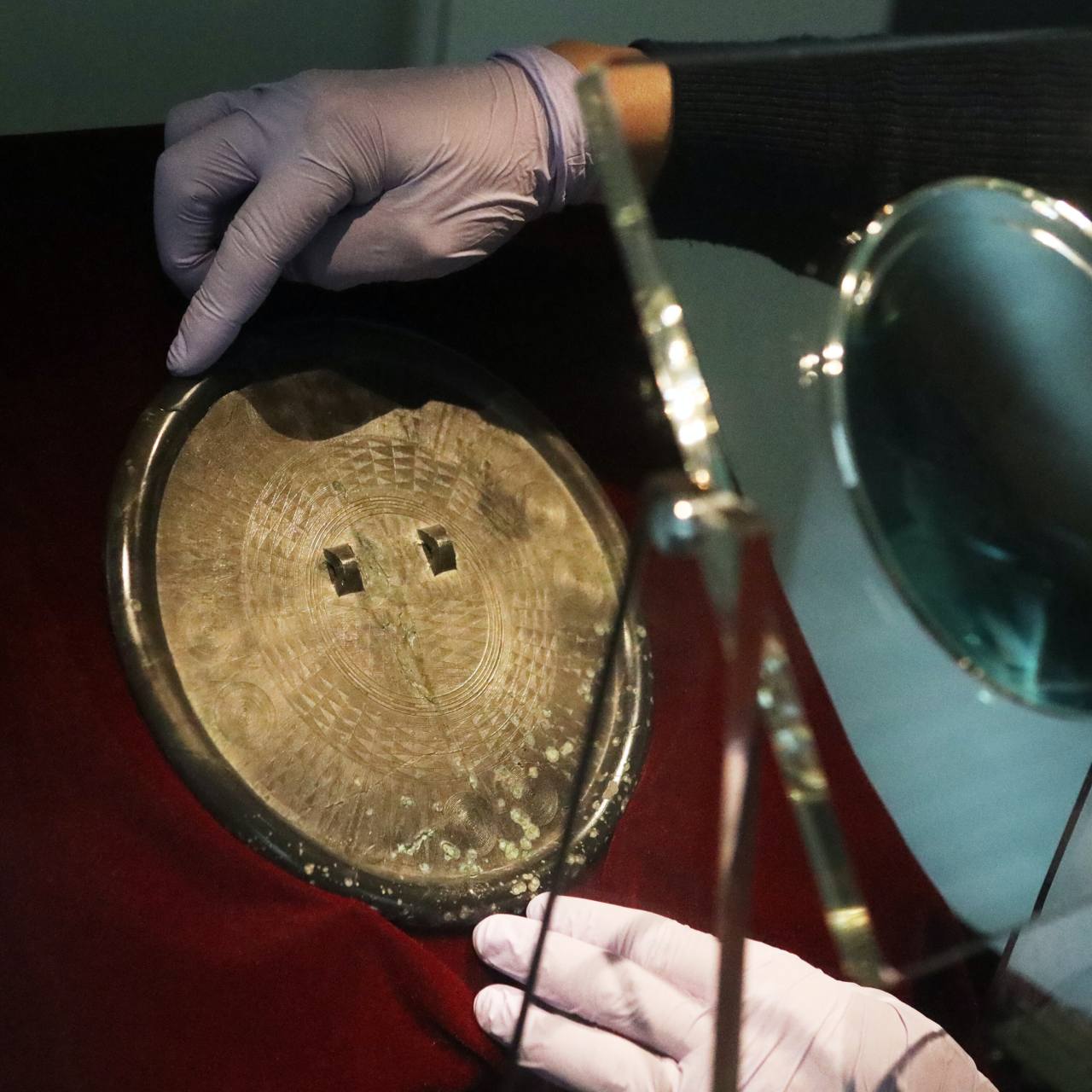 Researchers believe a chain or a cord was hung through two knobs on the side of the mirror, which also features geometric lines that are thinner than human hair. (Photo ©2020 Hyungwon Kang)
Korea, which is one of the top steel producers in the world, has been blessed with the presence of iron ores and was thus an ancient benefactor of the Iron Age and the preceding Bronze Age.

An abundant number of Bronze Age artifacts are dug up in Korea’s southwest region, better known as the Jeolla provinces. 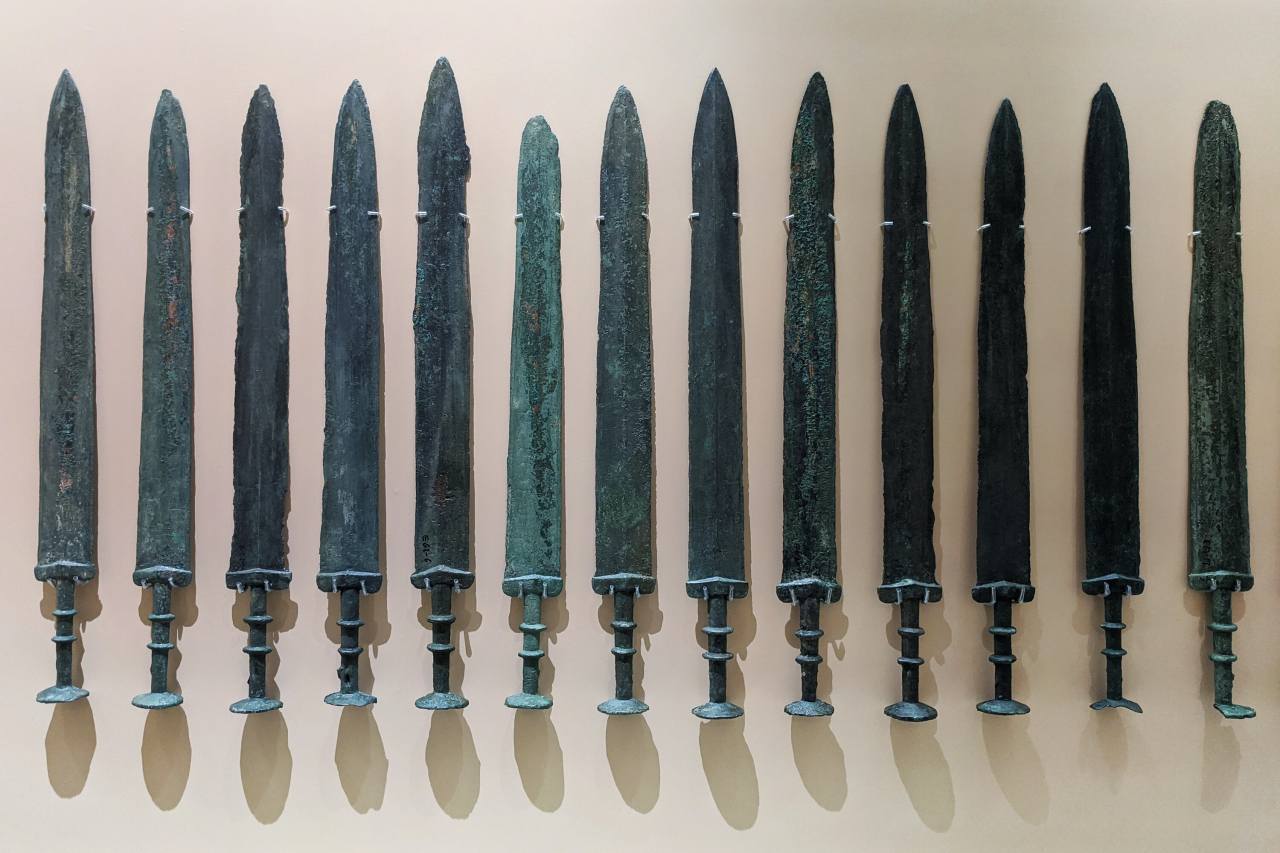 Evidence of iron manufacturing and processing from a later period was also found in the Jangsu area. According to Kwak Chang-keun, the head of the Gaya Culture Institute at Kunsan National University, there are more than 350 iron production ruins in the entire Korean Peninsula. “We have located at least 250 sites in North Jeolla Province alone,” Kim said.

The cutting edge high-tech Bronze Age mirror was made with zinc-bronze alloy, mixing zinc with copper, tin, and lead. In particular, the bronze mirror has an alloy ratio of 7 to 3 of copper and tin, which exhibits the most suitable hardiness and reflectivity as a mirror.

Following in the footsteps of the first example of nanotechnology in history, Korean electronics giant Samsung holds the largest slice of the global smartphone market today with their cutting-edge smartphones.