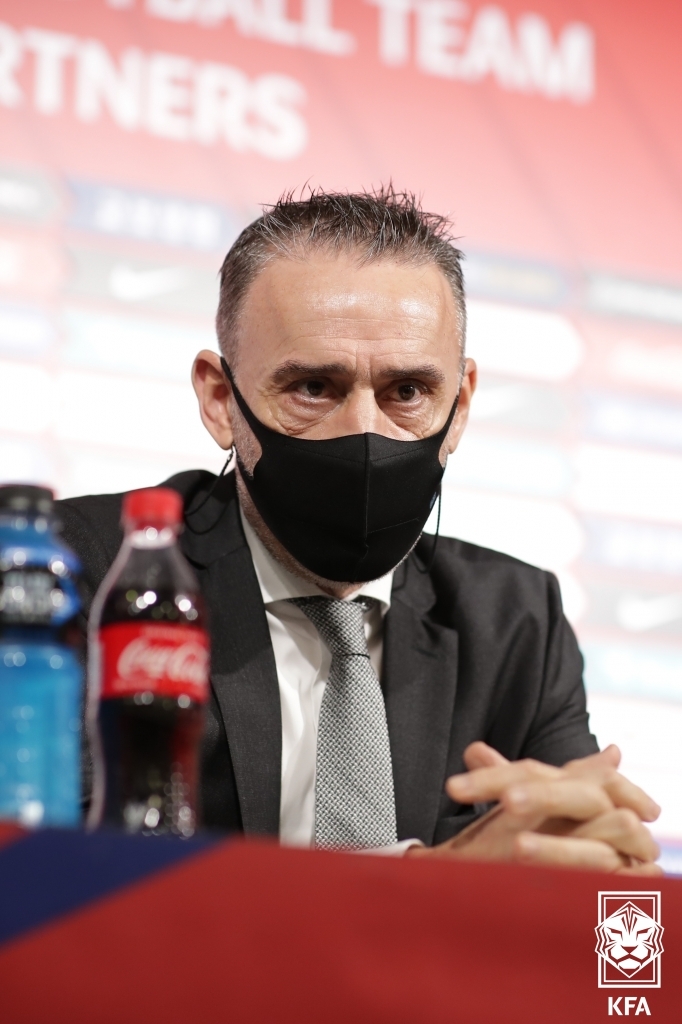 After making a surprising choice at the forward position Monday ahead of two World Cup qualifiers this month, Bento said a player's adaptability and tactical fit are just as important as goals.

That's how he explained his call-up of Kim Gun-hee, a 26-year-old striker for Suwon Samsung Bluewings in the K League 1.

Kim has scored six goals in 20 matches for the club this season, but none since May 29 as he's still trying to regain his touch following a sports hernia surgery in August.

Bento insisted Kim is in good physical condition, saying, "If (his condition) wasn't OK, he wouldn't have come."

There are a handful of other homegrown K Leaguers with more goals than Kim this season, including Jeju United forward Joo Min-kyu, who leads the K League 1 with 19 goals. But Bento said he and his staff liked Kim's fit the best, and he didn't really consider anyone else.

"For us, as a technical staff, we don't just talk about goals he scored. He's more than that," Bento said at an online press conference Monday. "The way he can adapt himself to our style, the way he can help us in different moments of the game, not just in the attacking phase but also in the defensive one, the way he presses and how he moves between the lines ... it's not just the question of if he scores or not."

Bento cited an example of Hwang, who didn't score for South Korea in the past two World Cup qualifiers against Syria and Iran.

"He didn't score, but he kept being a very important player for us," Bento said, without elaborating.

As for addressing Hwang's absence, Bento spoke of having multiple options.

Asian teams are currently in the final round of the qualifying campaign for the 2022 FIFA World Cup in Qatar. Through four matches, South Korea are in second place in Group A with eight points, two back of Iran with six to play. The top two nations from each of the two groups will automatically qualify for the World Cup, while two third-place teams must go through playoffs to join them.

Iraq, ranked 72nd in the world, held the 35th-ranked South Korea to a scoreless draw in their previous meeting in September, a result that felt like a loss for South Korea. Revenge may be on the minds of his players, but the coach said he won't look past the 71st-ranked UAE.

"The first game will be a difficult game for us. We're going to face a team that plays really well," Bento said. "Offensively, they have very good principles. They're going to demand from us a lot in the defensive way." (Yonhap)