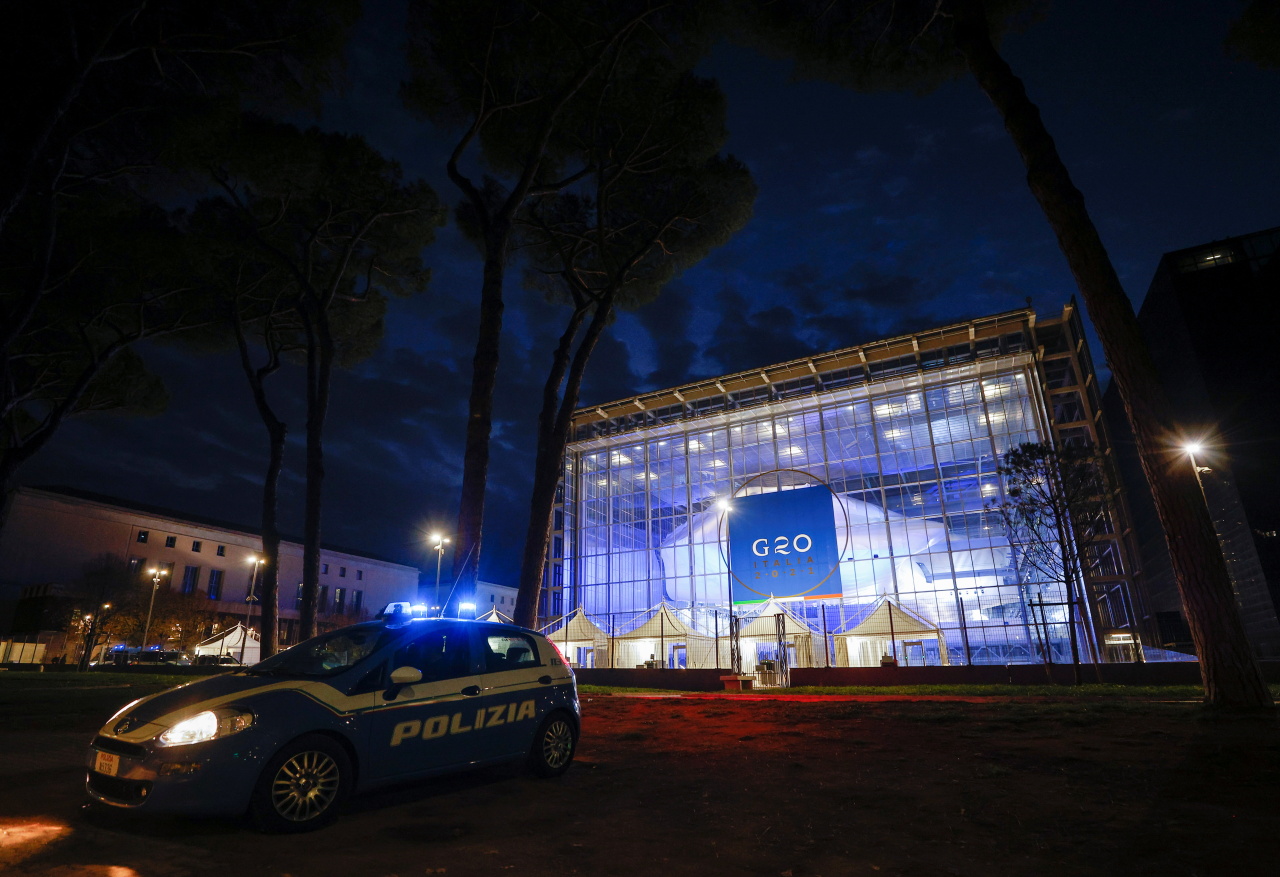 A police car is parked outside the convention centre "La Nuvola" (the cloud) ahead of the start of the G20 summit in Rome, Italy, on Saturday. (Reuters/Yonhap)
ROME -- Climate change and the relaunch of the global economy will top the G20 agenda as leaders of the world's most advanced nations meet Saturday, the first in-person gathering since the pandemic.

Looming over the two-day talks in Rome is pressure to make headway on tackling global warming, ahead of the key COP26 summit kicking off in Glasgow Monday.

"We are still on time to put things on track, and I think the G20 meeting is the opportunity to do that," Guterres said.

Security was tight in Rome as US President Joe Biden arrived in the Italian capital anxious to turn a page from the tumultuous Trump years and show that American leadership on the world stage is restored.

Yet the Democrat faces a credibility test as his own signature climate policy -- part of a sweeping economic package -- is held up amid infighting within his party in Congress.

Absent from the G20 will be Russia's Vladimir Putin and China's Xi Jinping, who plan to attend by video link.

Summit host Mario Draghi, the Italian prime minister, has called for a "G20 commitment on the need to limit the rise in temperatures to 1.5 degrees" above pre-industrial levels, the most ambitious target outlined in the 2015 Paris Agreement on climate change.

On Friday, British Prime Minister Boris Johnson -- the host of the UN talks next week -- gave a dire warning of what could happen if the world failed.

"We are not going to stop global warming in Rome or in this meeting in COP," he told reporters aboard his plane to Rome. "The most we can hope to do is slow the increase."

"You saw that with the decline and fall of the Roman Empire, and I'm afraid to say that it's true today unless we get this right in tackling climate change."

Complicating the task for the G20 will be disparities between top world powers on tackling global warming.

China, the world's biggest polluter and responsible for more than a quarter of all carbon emissions, has been accused of sidestepping calls to stop building new coal-fired power plants.

A new plan submitted by Beijing to the UN ahead of COP26 fell short of environmentalists' expectations, with a target date of 2060 to reach carbon neutrality.

Brazilian President Jair Bolsonaro, meanwhile, has steadfastly demanded that his country be paid for protecting its share of the Amazon.

The world's biggest rainforest is seen as a vital resource to combat climate change for its ability to absorb fossil fuel emissions.

A surer bet for concrete progress at the G20 involves taxation, as the group is expected to endorse the 15 percent minimum international tax rate on multinational companies after nearly 140 countries reached an OECD-brokered deal.

The move seeks to end tax optimisation, in which global corporations -- including big US tech firms like Apple and Google parent Alphabet -- shelter profits in countries with low-tax systems.

G20 finance ministers gave their backing to the tax overhaul in July.

Although no new pledges are expected on Covid-19 vaccines at the G20, a press release from a Friday meeting of G20 finance and health ministers stated that members would "take steps to help boost the supply of vaccines and essential medical products and inputs in developing countries and remove relevant supply and financing constraints."

A security force of over 5,000 police and soldiers has been mobilised for the summit, according to the interior ministry, and several demonstrations are expected.

The summit is being held away from the city centre, after violent clashes erupted earlier this month between protesters and police over the extension of Italy's coronavirus pass to all workplaces. (AFP)