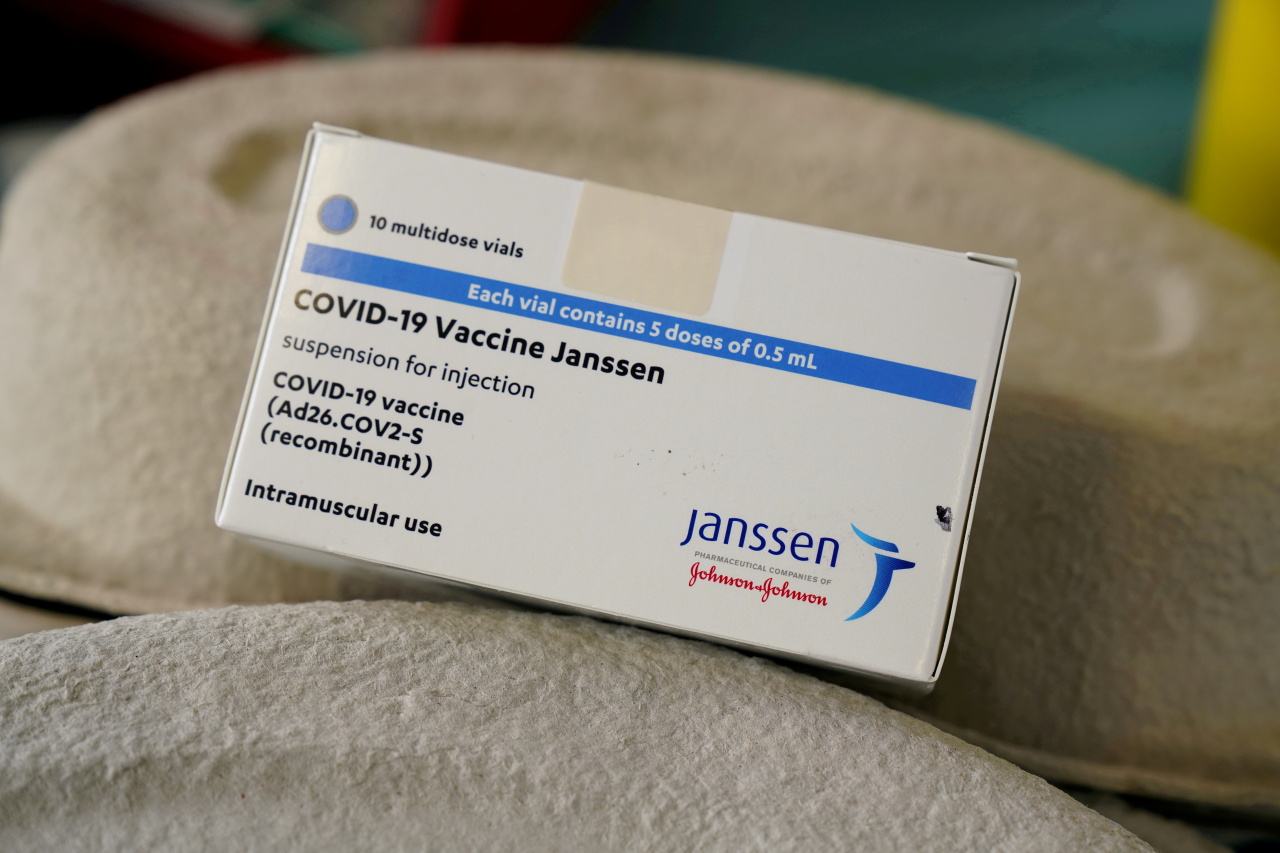 A box of Johnson & Johnson's COVID-19 vaccines is seen in this file photo. (Yonhap-Reuters)
People aged 50 and older and anyone who received Johnson & Johnson’s vaccine will become eligible for COVID-19 booster vaccination shots beginning the second week of November in Korea, the national health protection agency said Thursday.

The Korea Disease Control and Prevention Agency said COVID-19 boosters, which are being offered in order of priority set by its panel of immunization experts, will eventually become available to the general population, after high-risk groups are covered.

Booster vaccinations are given between six and eight months after the primary two-dose series, with an mRNA-type vaccine made by Pfizer or Moderna, according to agency recommendations. Pfizer’s vaccine is 30 micrograms per dose, and so is its booster. Moderna’s booster, on the other hand, is half of the dosage of its original 100 micrograms.

People who were initially vaccinated with two doses of the Pfizer or Moderna vaccine are recommended to receive a third dose of the same vaccine.

Since no AstraZeneca vaccine is available as a booster, its recipients will get either of the mRNA vaccines. But for people who receive a combination of the AstraZeneca and Pfizer vaccines in a mix-and-match regimen, the third dose should be of Pfizer rather than Moderna to minimize the types of vaccines one takes.

For those who have received the Johnson & Johnson vaccine, the minimum waiting time until the added dose is two months. Johnson & Johnson recipients who are older than 29 years have the option of following up on the single-dose vaccine with a second of the same, or an mRNA vaccine.

People who were vaccinated outside Korea with brands not approved by Korean drug regulators but by the World Health Organization can still receive an mRNA booster if they meet the criteria.

Reservations for booster vaccinations for newly eligible groups will open Monday, and will be administered from later in the month through the end of the year.

According to agency estimates, there are about 320,000 people in their 50s who have been fully vaccinated for six months or longer, and who are now invited to extend their protection with an extra dose. Some 1.4 million people got Johnson & Johnson’s vaccine at least two months ago.

Also qualifying for a booster are clinically vulnerable adults of all ages with conditions such as diabetes, chronic obstructive pulmonary disease, chronic renal failure, chronic hepatitis B, Parkinson’s and Alzheimer’s.

Korea’s very first round of booster vaccinations were provided to front-line health care workers, residents of communal establishments and people in their 60s and older earlier this month.

KDCA Commissioner Jeong Eun-kyeong said in Thursday’s briefing that two doses of AstraZeneca, Pfizer and Moderna vaccines or one Johnson & Johnson dose will still represent complete vaccination, at least for some time.

In other words, a booster dose will not be required for a valid “vaccine pass,” which comes into effect Monday here, and will exempt fully vaccinated people from COVID-19 safety rules such as the limit on large social gatherings.

Other senior agency officials had said in prior briefings that the vaccine pass recognizing a person’s vaccination status may come with an expiration date, depending on emerging evidence on the durability of the protection generated by a vaccine.

“At this point it’s hard to predict when the vaccine pass or the vaccination certificate will expire,” Jeong said.

But certain populations such as older adults and the immunocompromised may need to increase protection with another dose, and are urged to get it, she added.

Johnson & Johnson breakthrough infections, which are infections occurring in fully vaccinated people, were also more common than for any other vaccine brand here, she said.

About 3,800, or 0.2 percent of more than 1.4 million people who took the one-dose vaccine here, have come down with COVID-19. The agency data counted 266 breakthrough cases for every 100,000 recipients of the Johnson & Johnson vaccine, which is higher than 99 for AstraZeneca, 48 for Pfizer and 4 for Moderna.

“So people who got Johnson & Johnson’s vaccine may benefit from a booster,” she said.

Since the vaccine campaign launched in late February, 72 percent of the 51 million people in Korea have been fully vaccinated against COVID-19, according to official statistics posted Thursday. Previously, public health authorities had set a full vaccination rate of 70 percent as the threshold for opening up the country.

Nightly curfews on most businesses -- except for “adult entertainment” venues -- and other social distancing requirements will end next week as Korea enters the first of its three-phase return to normal.