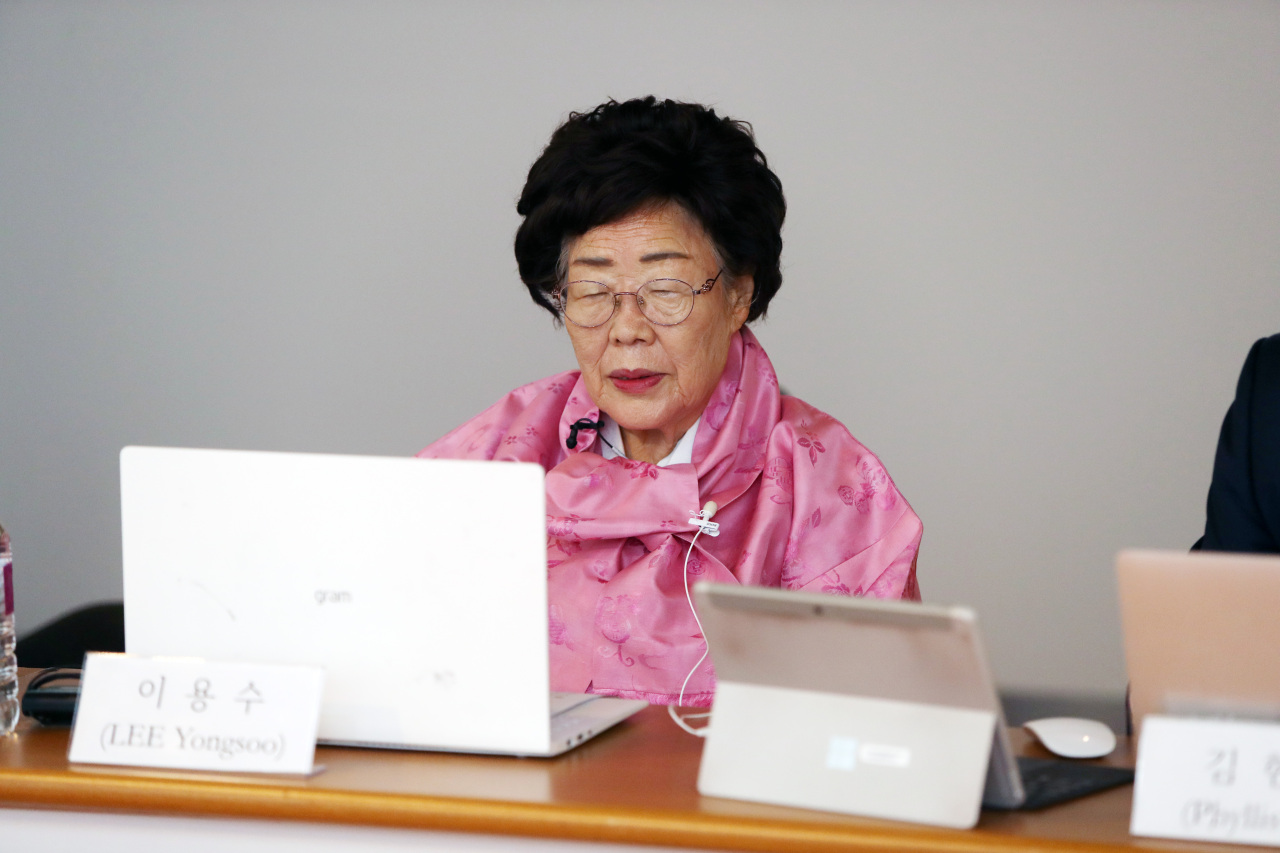 Lee Yong-soo, a survivor of wartime sexual slavery by the Japanese military, speaks during a press conference on Tuesday. (Yonhap)

A 93-year-old former “comfort woman” pleaded with the South Korean government on Tuesday to take the issue of Japan’s wartime sexual slavery to the UN Committee Against Torture.

Speaking at a virtual press conference, Lee Yong-soo urged President Moon Jae-in to refer the case to the UN body, which monitors adherence to the UN Convention Against Torture and Other Cruel, Inhuman or Degrading Treatment or Punishment -- which both South Korea and Japan have ratified.

“I can’t wait any longer,” said Lee. Japan is distorting history, she continued, “even when a living witness to that history is alive with both eyes wide open. So what will happen when we are all gone?”

Lee is one of 13 registered survivors of Japan’s wartime sexual slavery, euphemistically called comfort women, in Korea. Scholars estimate that between 170,000 and 200,000 women and girls were forced to work in Japan’s military brothels before and during World War II, and the UN acknowledges that this occurred.

Reading a letter addressed to Moon, she asked the president to go with her to the Committee Against Torture and resolve the issue, “before one more person dies.”

“Right now is the time to resolve (the issue),” she said. “I hope (President Moon) doesn’t miss this opportunity.”

Early this year, Lee asked Moon to bring the sexual slavery issue to the International Court of Justice for a verdict. Since then, she has repeatedly asked the Korean government and the public to refer the case to the UN’s highest court. But Lee said the government -- including Cheong Wa Dae, the Ministry of Foreign Affairs, the Ministry of Gender Equality and Family, National Human Rights of Korea and the National Assembly -- had remained unresponsive.

Neither Seoul nor Tokyo has shown much interest in taking the issue to the court in The Hague, considering the “low-key” approach that Korea has taken on historical issues in a bid to mend ties with Japan.

Tokyo insists all claims related to its 1910-45 colonial rule of Korea were settled under a 1965 pact that normalized bilateral relations. It also asserts that the 2015 agreement on “comfort women” resolved the matter “finally and irreversibly.”

Taking the case to the world court would require consent from both Seoul and Tokyo, making it difficult for Seoul to proceed unilaterally even if it decided to do so.

“When we asked the Seoul government earlier for the ICJ referral, they were hesitant as they believed Japan would not give consent,” Shin Hee-seok, an international law expert at Yonsei University who is helping the victims bring the case to the world court, said at the press conference. “But the Committee Against Torture doesn’t require Japan’s consent. If the South Korean government has the political will to help the victims, we could pursue this process.”

Under the committee’s procedure, Seoul can inform Tokyo in writing that it violated one of its obligations under the UN Convention Against Torture. When Tokyo receives the communication, it is required to provide an explanation within three months to clarify the matter.

If the matter is not settled through arbitration within six months after the initial communication and the UN committee rules that Tokyo violated the convention, Seoul can bring the dispute to the International Court of Justice, even without Japan’s consent.

Shin stressed that the sex crimes committed by the Japanese military could be recognized as torture, considering that in the past the committee had raised concern over Japan’s failure to provide adequate redress and assistance to the victims.

In regards to taking the issue to the UN committee, South Korea’s Foreign Ministry said Tuesday that it would “carefully” review the matter and would continue to closely communicate with the victims.