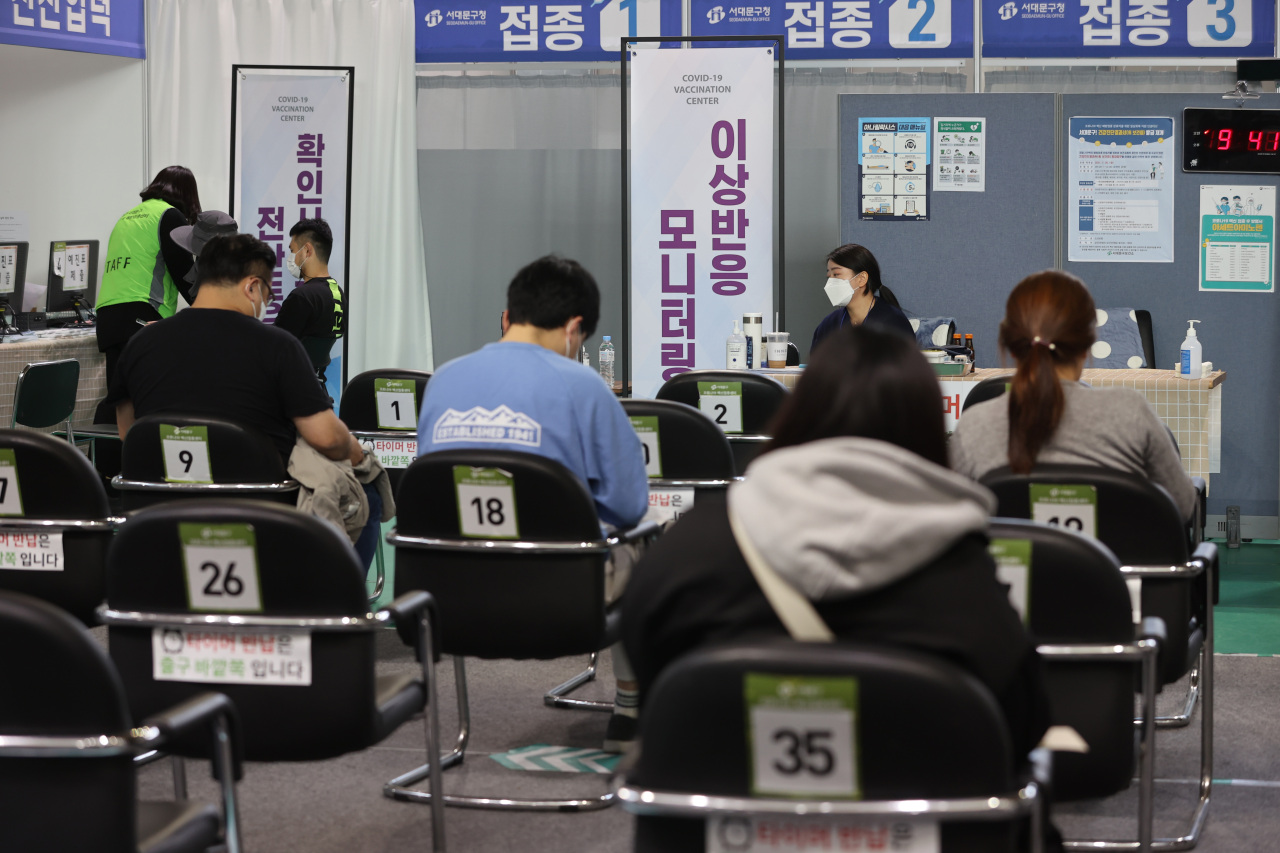 People wait to check for any abnormal symptoms after getting vaccinated against COVID-19 at an inoculation center in Seoul on Thursday. (Yonhap)
South Korea on Saturday achieved its goal of fully inoculating over 70 percent of the country‘s population earlier than scheduled amid its accelerating vaccination drive.

A total of 35.94 million people have received their both shots of COVID-19 vaccines as of 2 p.m., accounting for 70 percent of the country’s 51.3 million population, according to the Korea Disease Control and Prevention Agency (KDCA).

The achievement comes as the country is set to gradually phase out coronavirus restrictions starting next month, joining a list of countries embracing a new scheme of returning to normal life with the coronavirus.

The scheme, dubbed “Living with COVID-19,” is set to take effect in early November. It means that COVID-19 will be treated as an infectious respiratory disease, like seasonal influenza, with eased social distancing being implemented.

Authorities expect vaccinations will further pick up steam going forward, to get 85 percent of all South Koreans and foreigners living in South Korea fully inoculated by early next year, which is expected to create the so-called herd immunity.

Herd immunity occurs when a large portion of the population becomes immune to a certain type of disease, making the spread of the disease from person to person unlikely.

Currently, the restrictions on private gatherings have been lifted to allow up to eight people in the greater Seoul area, provided that four of them are fully vaccinated. A maximum of 10 people, including six fully vaccinated, are allowed in other regions.

The eased rules will apply until the end of this month in what the authorities said would be the last adjustment of social distancing.

Talk of booster shots is gaining traction, with authorities planning to start booster shots for people over 60 and those who are less immune next month. Booster shots will also be applied to those who were vaccinated overseas.