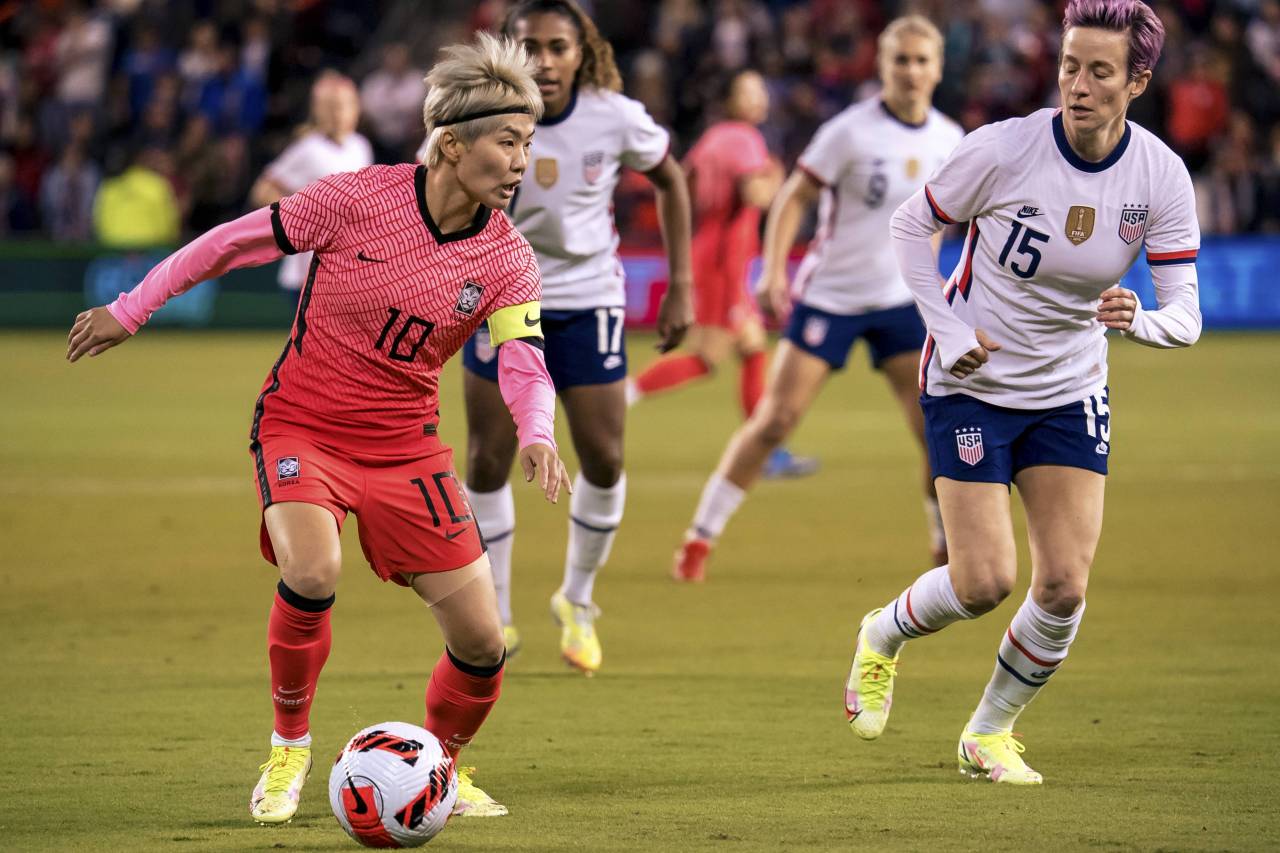 In this Getty Images photo, Ji So-yun of South Korea (L) tries to dribble past Megan Rapinoe of the United States during their teams' friendly football match at Children's Mercy Park in Kansas City, Kansas, on Thursday. (Yonhap)
Bending without breaking, South Korea held world No. 1 United States to a scoreless draw in the first of their two women's football friendlies on American soil.

Goalkeeper Yoon Young-geul made key saves, and the visitors played some dogged defense against the American onslaught at Children's Mercy Park in Kansas City, Kansas, on Thursday (local time).

The draw snapped the US home winning streak at 22 matches. The last time the US had failed to win at home was also against South Korea -- a 1-1 draw on Oct. 6, 2019, in Chicago.

These two teams will meet again at 7 p.m. next Tuesday at Allianz Field in St. Paul, Minnesota, or 9 a.m. next Wednesday in Korean time.

South Korea, ranked 18th, remained winless in 14 meetings against the US, with four draws, 10 losses.

South Korea are gearing up for the 2022 Asian Football Confederation (AFC) Women's Asian Cup, scheduled to kick off in January in India. South Korea head coach Colin Bell said earlier this week that the two US matches would provide "a great test" for his players in their preparation for the continental tournament.

And at least on the defensive side, South Korea deserved high marks for their effort.

The Americans asserted their dominance early. In the 13th, midfielder Lindsey Horan hit the left post with a left-footed shot from outside the box. Six minutes later, Horan forced a tough save by goalkeeper Yoon Young-geul with her header.

In the next minute, Yoon came up with another huge save on Alex Morgan's shot from close range.

South Korea's lone shot on target in the opening half came in the 35th minute, when Jang Selgi pounced on a loose ball with a volley that Adrianna Franch stopped diving to her right.

The US didn't let up in the second half. Five minutes in, substitute Kristie Mewis had an open look from the left side of the box but sent her shot just over the net.

In the 56th, Yoon came up with another outstanding save, as she dove to her left to deny Rose Lavelle on a header from the middle of the box.

Yoon had a kick save and a beauty on Carli Lloyd in the 76th minute, foiling the retiring veteran's attempt at her 135th international goal in her 315th match.

South Korea played the final 10 or so minutes in damage control mode, and the US couldn't get one past Yoon, despite outshooting South Korea 19-8.

In their 22 previous home matches, the US had outscored their opponents 91-3. (Yonhap)