Long before photography arrived in the Joseon Kingdom (1393-1910), portrait artists were challenged to draw detailed portraits that included a view into the inner spiritual world of the subject. 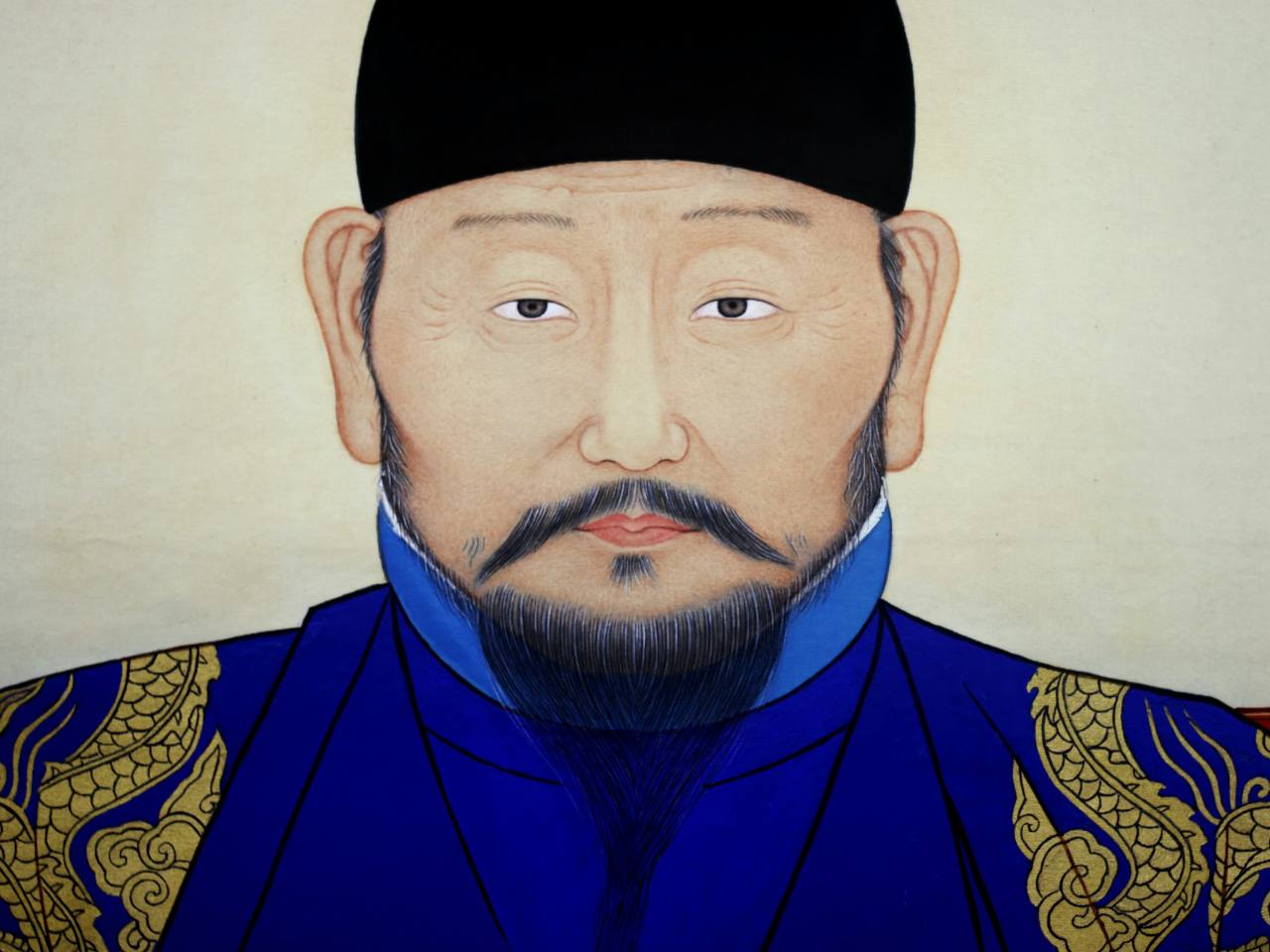 This portrait of a young Yi Seong-gye is a painting by artist Kwon Oh-chang based on a 1911 photograph of the original portrait. (Hyungwon Kang) 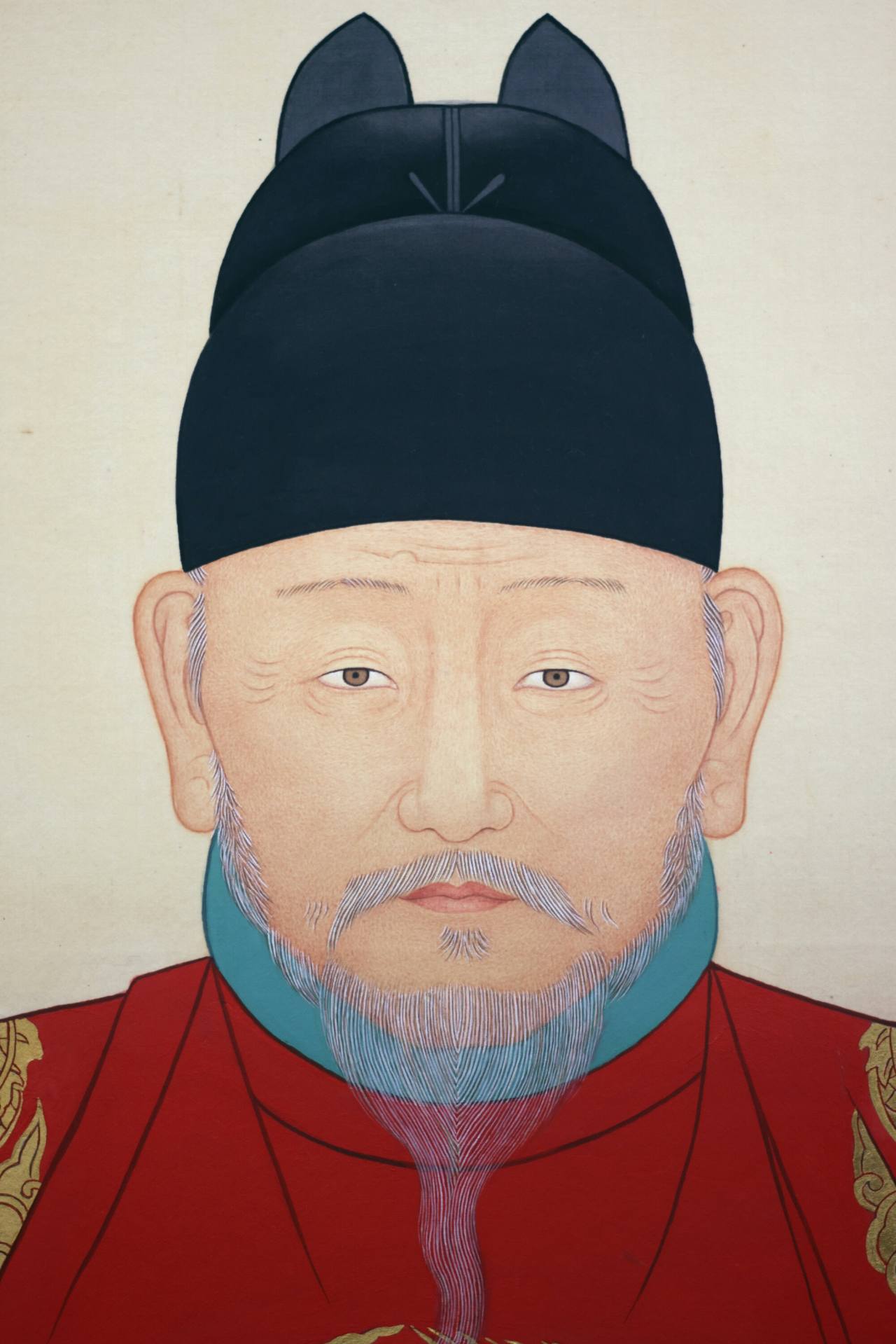 An official portrait of Yi Seong-gye, the founder of Joseon, at an advanced age, is on display at the Royal Portrait Gallery in Jeonju, Korea. (Hyungwon Kang)
Gen. Yi Seong-gye’s piercing eyes look like they can freeze the enemy just with a glance.
Enemies feared him and his several thousand loyal soldiers, who never lost a battle.

King Yi Seong-gye is believed to have been born with long arms, and according to the Veritable Records of the Joseon Dynasty, he was a gifted marksman who could shoot anything down. He won many battles when enemies surrendered upon seeing him accurately hit enemy fighters.

The 1,893 volume Veritable Records of the Joseon Dynasty, the Joseon Wangjo Sillok, is an authentic historical record of Korea from 1392-1863 that forms part of the UNESCO’s Memory of the World.

Until the 14th century, might was always right. Prominent rulers of Goryeo, just as was the case in the Eurasian plains, were mostly military men.

Yi’s successful military coup made him the last ruler of the Goryeo Empire in 1392, and he established the Joseon Kingdom in 1393.

All roads led to Kaekyong when it was a happening place in the 14th century. The capital had 25 gates on its 23-kilometer walls, connecting it to faraway places in all directions.

There was sizable and visible Muslim population living in Korea through the 15th century. Researchers believe there were some 40,000- 70,000 Muslims living in the Goryeo Empire through the Joseon period. The Joseon Wangjo Sillok documents King Sejong’s decree in 1427 to bar Muslims from wearing different looking outfits after hearing “the people are shying away from marrying people wearing clothes looking different (from ours).”

The English name Korea has its origin during the Goryeo period when seafaring merchant ships from the Arabian Peninsula, the Indian subcontinent, and the Mekong region in Southeast Asia often visited Kaekyong, as documented in the 1124 “Goryeo Picture Book” by Song Dynasty envoy Seo-geung (1091-1153).

As the founder of a new kingdom of Joseon, Yi needed a fresh start from Goryeo’s economic and political establishment.

Yi chose to create a new capital city 75 kilometers south of Kaekyong and moved the capital to Seoul in October 1394. Seoul in Korean language is a common noun, referring to the capital city.

The very private militia which defined Yi’s power, became a curse in his own family.

Efforts to consolidate the private armies of Yi’s eight sons backfired. Militias loyal to Joseon’s princes would not disband and merge their forces into the national armed forces.

The forces loyal to Yi’s fifth son Bang-won, who assisted his father’s rise to power, assassinated two young princes, step brothers to Bang-won, in a succession struggle while his father was ill.

The founder of Joseon lived to be 72 years old, but relinquished his power to his fifth son, after six years on the throne.

Kingmaker Bang-won temporarily yielded the throne to his elder brother Bang-gwa in 1398 for two years. The second king of Joseon had no children.

Joseon founder’s fifth Bang-won became the third king of Joseon and ruled for another 18 years.

Bang-won, the third monarch of the Joseon Kingdom, is the father of King Sejong the Great.

Yi, who was the last military leader to take the throne in Goryeo, was the last of its kind. The practice of consolidating private militias into the national military became the norm for the rest of Joseon’s history.

During centuries of wars, most of the official portraits of Yi were burned or disappeared, but two of his portraits, one when he was a young king and another at an advanced age, survive.

Joseon-period portraits have colors painted on both sides of the silk. The painting on the back of the portrait adds to the richness of the color in the portrait paintings, as well as completing the archival component of the paintings.

When his portrait was moved from Seoul to the current location at Gyeonggijeon in Jeonju, North Jeolla Province, 200 kilometers away, where a Royal Portrait Museum is built to house his portraits, an entourage of 300 people carried the portrait in a procession that lasted seven nights and eight days.

In 1872, when the original portrait was deemed too old, a team of painters made duplicates with exacting details, including every piece of hair and a wart on Yi Seong-gye’s forehead.

The original portrait was washed and placed inside a Joseon white porcelain and buried at the Royal Portrait Museum in Gyeonggijeon. 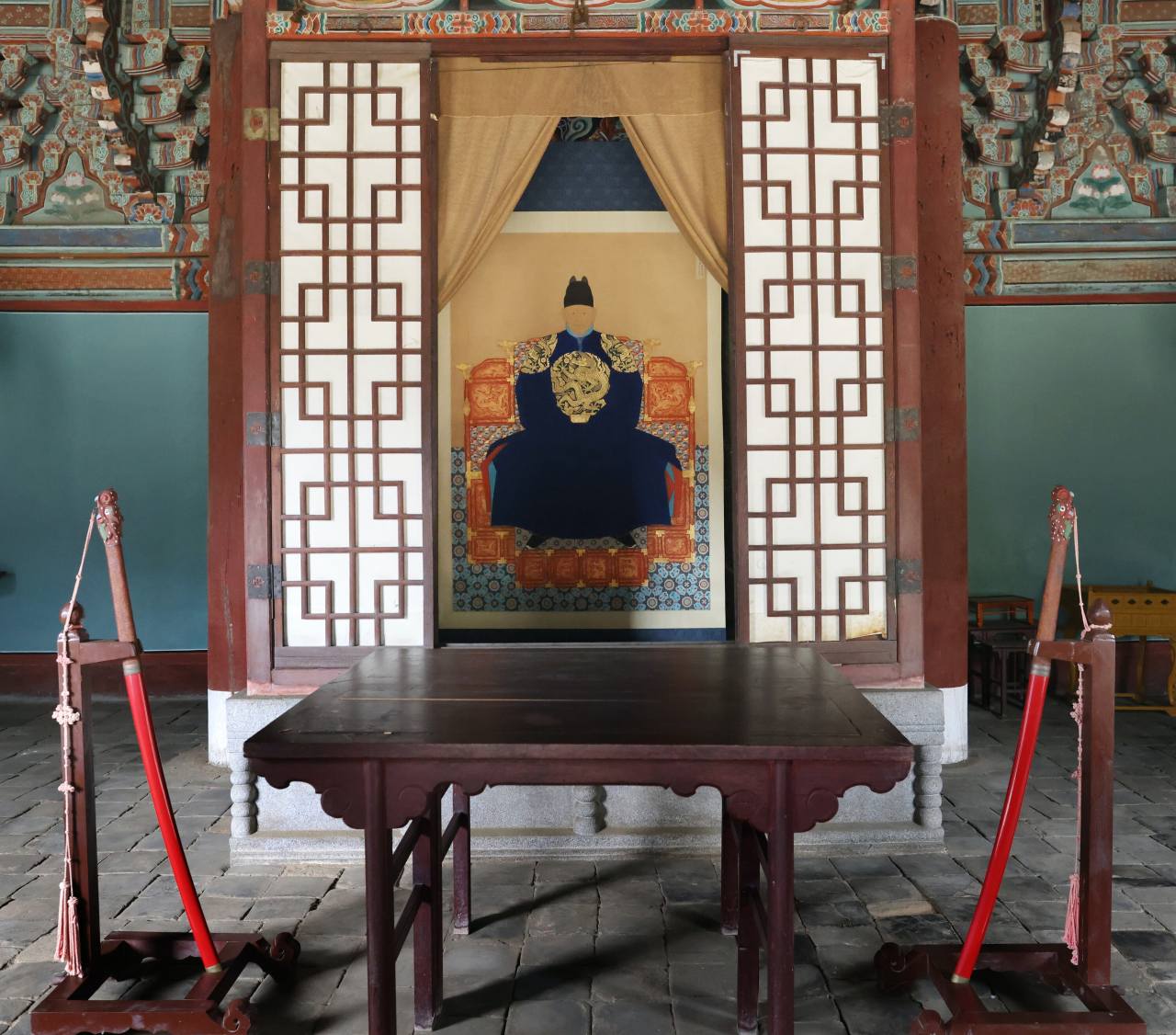 An official portrait of Yi Seong-gye is displayed at the Royal Portrait Gallery in Jeonju, North Jeolla Province. (Hyungwon Kang) 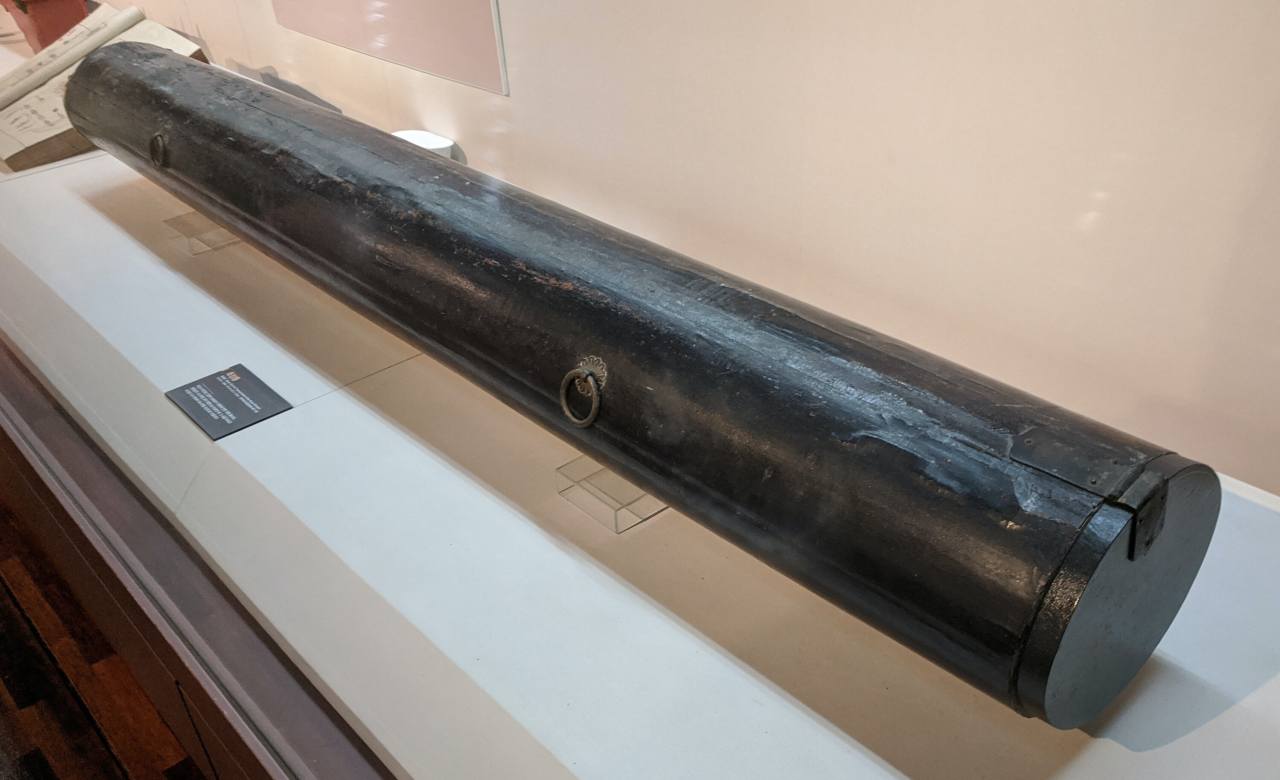 Heukjangtong, a case used in transporting royal portraits made from two symmetrical pieces of pine carved out to create a tube, is displayed at the Royal Portrait Gallery in Jeonju, North Jeolla Province. (Hyungwon Kang)
When Yi passed away in 1408, he wished to be buried in his hometown in Hamheung, in present day North Korea, but due to the Royal Palace rule placing all royal tombs within 100-ri (40 kilometers) of the palace, Yi was buried at Geonwonneung in Guri, Gyeonggi-do, less than an hour by car from Seoul. 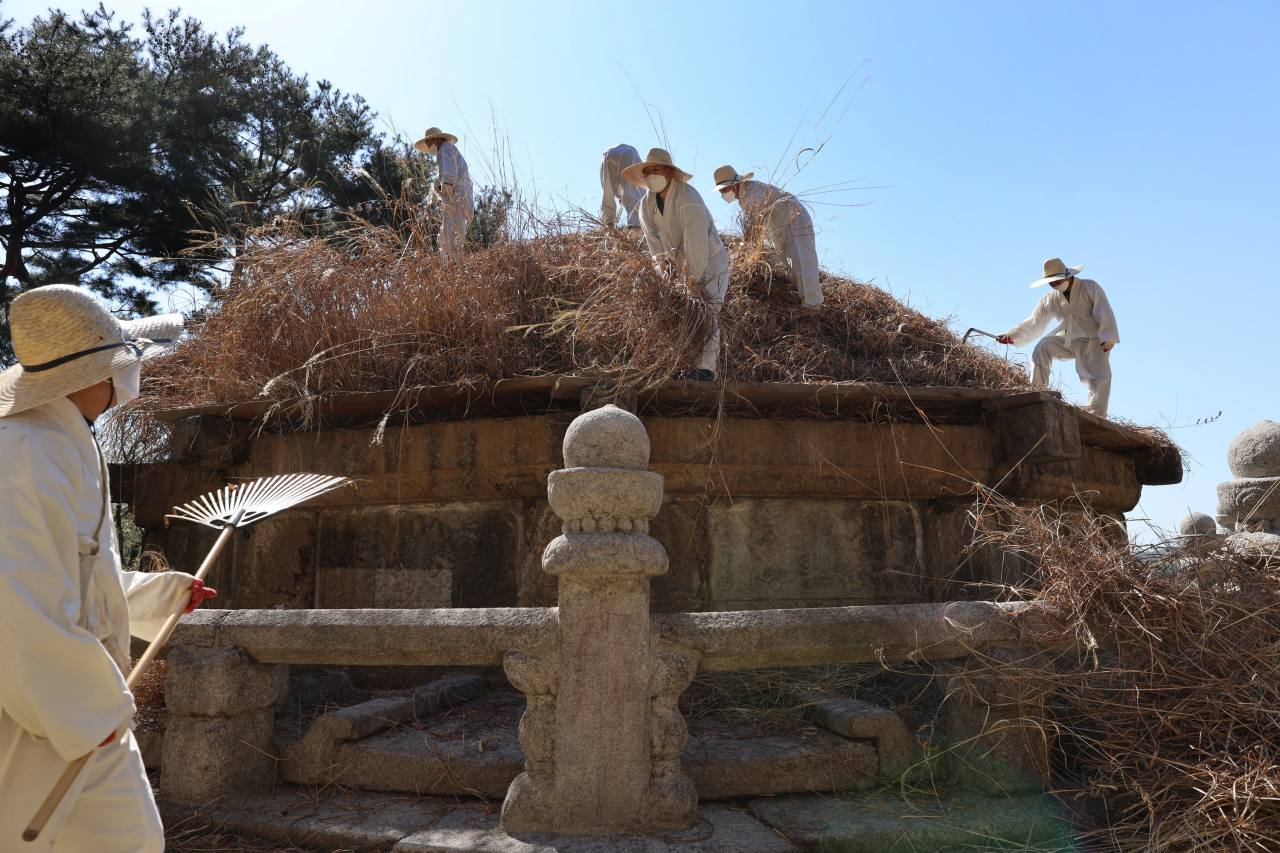