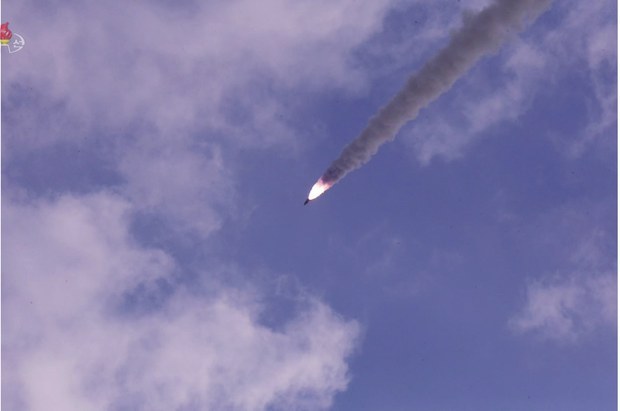 this photo captured from North Korea's Korean Central TV Broadcasting Station on Wednesday a new type of a submarine-launched ballistic missile (SLBM) is test-fired from waters the previous day. The South Korean military said North Korea fired what appears to be an SLBM toward the East Sea from waters off Sinpo, a city on the North's east coast. (Yonhap)
North Korea said Thursday its recent test-firing of a new submarine-launched ballistic missile (SLBM) was not targeted toward the United States, adding there is no need for Washington to "worry or agonize" over it.

A spokesperson for the North's foreign ministry expressed concerns over "nonsensical" reactions from the US and the UN Security Council over its "rightful exercise of right to defense" in a statement carried by the official Korean Central News Agency (KCNA).

Two days earlier, North Korea fired an SLBM from the vicinity of Sinpo, where its main submarine shipyard is located. It marked the North's eighth known major missile test this year.

"If they don't take issues with our rightful exercise of sovereignty, there will never be an incident raising tensions on the Korean Peninsula, but if the US and its followers make the wrong choice, it could serve as a catalyst for more grave and serious consequences," the North warned in the statement.

The North said the US' criticism against its weapons development is clearly a "double standard" that only raises suspicion over the authenticity of the claim that it does not harbor hostility toward Pyongyang.

Calling the UN Security Council's emergency meeting on the SLBM test as "provocative," the spokesperson said the US and South Korea are not its "arch-enemy."

"As our test-launch was planned purely for national defense, not in consideration of or targeting the US, there is no need for it to worry or agonize," added the spokesperson, whose name was not revealed.

The US has condemned North Korea's recent missile tests but reaffirmed that it remains committed to engaging with Pyongyang in dialogue.