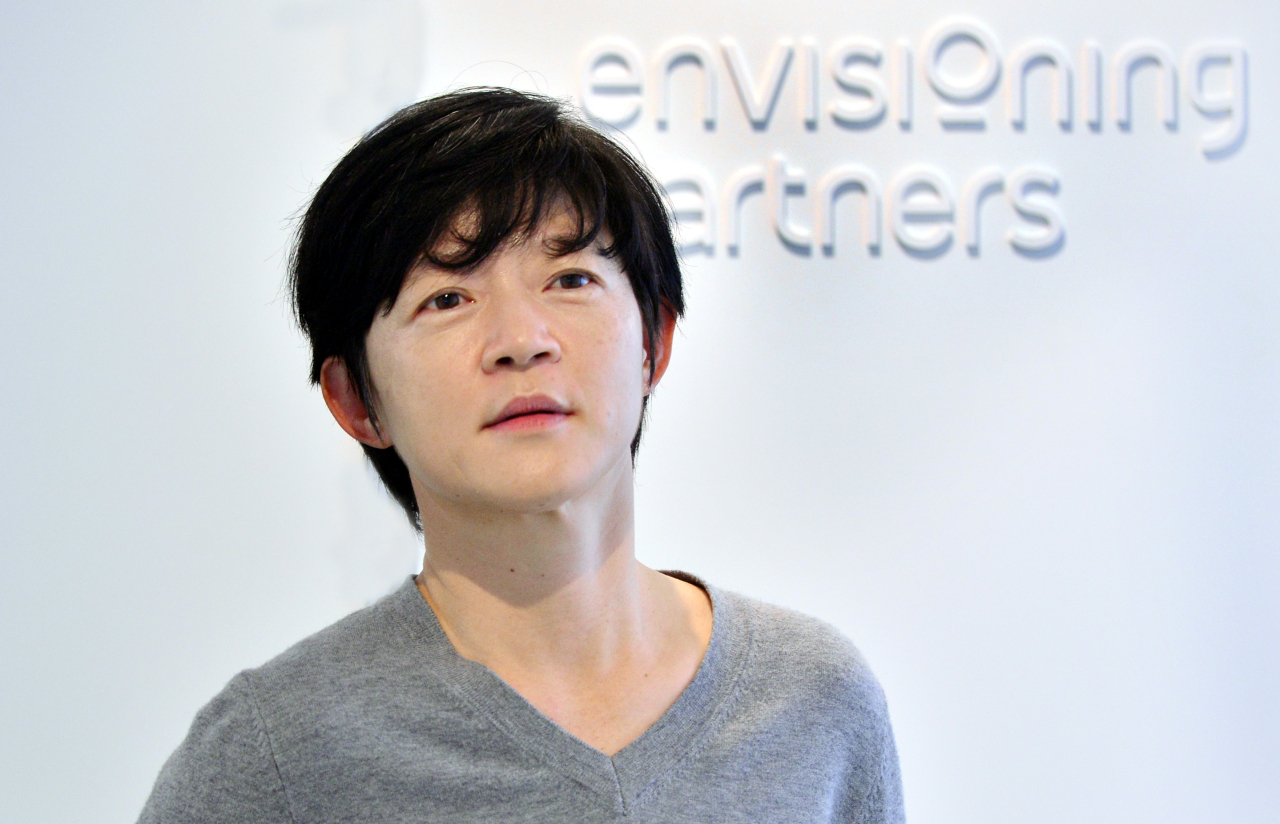 Envisioning Partners Managing Partner Je Hyun-joo speaks during an interview with The Korea Herald in Seoul. (Park Hyun-koo/The Korea Herald)
The world has been witnessing deadly catastrophic events like wildfires and heat waves over the past couple of years, and climate change is considered a major culprit behind them.

Such extreme weather events show no signs of abating despite decreased greenhouse gas emissions due to COVID-19 pandemic since last year, which signals that climate change is a problem of the present, not a problem of the future.

The seasoned impact investor said market opportunities that emissions give are immense with a broader eye.

“From a climate tech investor’s perspective, large carbon emissions translate into a high market potential,” Je, 44, told The Korea Herald during an interview at its headquarters in Seoul.

In particular, Je stressed sustainable food technology’s role in reducing gas emissions, given that cattle are a major source of methane emissions – equivalent to gigatons of carbon dioxide each year. The same is true for manufacturing, transportation and buildings, as well as electricity, quoting “How to Avoid a Climate Disaster” by Bill Gates.

In this regard, the concept of climate technology can be applied universally across industries, way beyond renewable energy sectors.

“Every business activity emits carbon, so that’s why we need to look at a business through the lens of climate change,” Je said.

And a diverse background of Envisioning’s investment professionals -- not necessarily limited to finance -- is a plus.

“We felt confident that this urgency opens the door to a tremendous opportunity in the market within 10 years. This was behind our decision last year to create our first fund that is 100-percent dedicated to climate technology,” she said.

Je was formerly a consultant and an investment banker, with the academic background of industrial design at Korea Advanced Institute of Science and Technology.

In early 2010s, Je quit her decadelong career and dedicated herself to the context of social economy, establishing a community-based cooperative RollingDice and authoring books, including one on future of work.

Pondering over social values that resonated with that stage of her life, Je returned to the investment field, assuming the lead role in impact investing for venture capital house Yellowdog.

Starting 2017, Yellowdog invested a combined 68 billion won in 29 companies as of March. These bets were meant to pursue a financial return on its early-stage venture investment from companies aiming to solve social problems. Je has been portrayed as an impact investing trailblazer in a startup ecosystem in Korea, where the concept of impact investing was alien. In August, Yellowdog‘s assets, including the impact investment vehicles, were transferred to Envisioning.

The COVID-19 outbreak last year was a turning point to the seasoned investor. Reflecting on priorities in Je’s impact investment domains -- solutions that address social issues such as climate change, health care, quality education solutions and workplace improvement -- Je‘s latest vehicle is the first of its kind to dedicate itself solely to climate-related technology.

The veteran impact investor said the key to climate technology investing was whether an investor is adept at measuring the amount of emissions a certain business activity is responsible for, and at understanding the technology deeply enough to test a solution’s carbon reduction outcome. On top of them, patience is needed considering the long way climate technology firms still have to go to commercialize their solutions.

“Given the vast scope of climate tech, we spent our resources building more deal pipelines and sharpening our strategy as an early-stage VC,” she said. “An early-stage climate tech fund should have a dedicated resource and an expertise to understand the startups’ deep technology.”

Envisioning’s latest fundraising was announced within just a month of its foundation.

This level of attention is a testament to Korean enterprises‘ growing commitment to cope with the impending greenhouse gas crisis and to achieve a sustainability-driven goal, coupled with the country’s net-zero pledge in 2020.

“Our fund backers comprise investors who sympathize with our sustainability goals for future generations, as well as companies which seek to align their climate actions with their strategic goals and their aim for new business development,” Je said.

In the meantime, the recent attention to climate-themed investing in countries including the US, Je added, is a harbinger to various exit opportunities that the early-stage investor searches for, combined with irreversible changes in climate being made.

This brings to light Envisioning‘s aim to build stronger foreign deal pipelines, which climate technology startups can take advantage of to tap into Asian markets.

“An accurate understanding of climate tech entrepreneurs’ solutions to a problem, a capability to ask right questions to them to engage in a serious and smart communication, and an access to a new market they envisioned: These are the values we can add to startups as an Asia-based impact VC,” Je said.