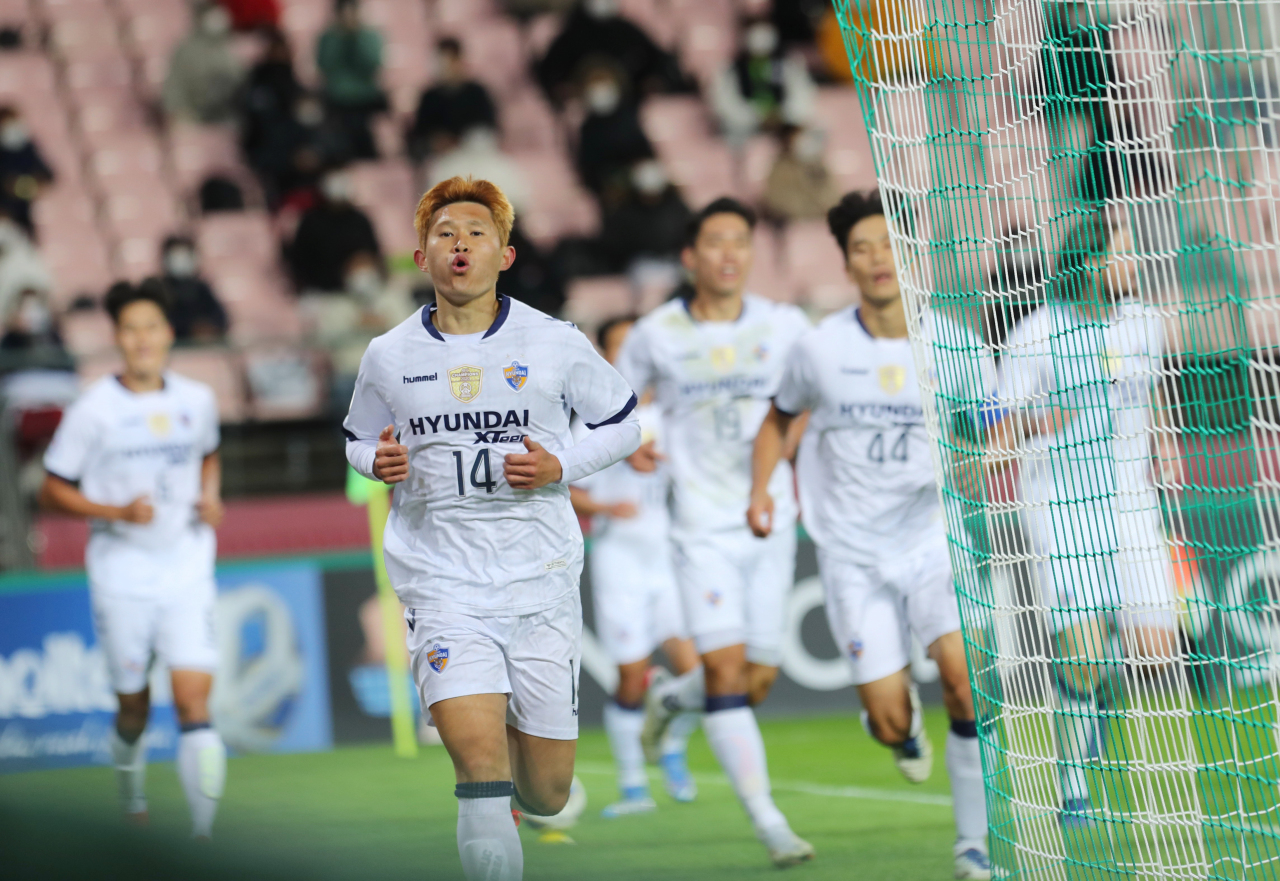 Lee Dong-gyeong of Ulsan Hyundai FC celebrates his goal against Jeonbuk Hyundai Motors during the clubs' quarterfinal match of the Asian Football Confederation Champions League at Jeonju World Cup Stadium in Jeonju, 240 kilometers south of Seoul, on Sunday. (Yonhap)
For the second straight year, a South Korean team will vie for the championship trophy at Asia's top club football tournament.

We will find out Wednesday night which team that will be.

Two K League 1 clubs and regional rivals, Ulsan Hyundai FC and Pohang Steelers, will clash in the semifinals of the Asian Football Confederation (AFC) Champions League on Wednesday. The kickoff is 7 p.m. at Jeonju World Cup Stadium in Jeonju, 240 kilometers south of Seoul.

Ulsan won the 2020 AFC title and will chase their third championship overall. Pohang have won the continental crown three times, but not since 2009. That is also the last time they'd reached as far as the semifinals.

Ulsan are now a step closer to pulling off a treble, or winning three major trophies in one season. No Korean club has accomplished the feat.

Ulsan are currently leading the K League 1 and have reached the semifinals of the Korean FA Cup, which will take place on Oct. 27.

Ulsan, with their superior depth up and down the roster, will come at you from all angles. They're riding an 18-match undefeated streak in the AFC Champions League.

Pohang have decidedly less firepower than Ulsan, and have not beaten Ulsan in the K League 1 this year. The two clubs had a 1-1 draw in March, but Ulsan claimed the next two meetings -- a 1-0 victory in May and a 2-1 win in September.

Jeonju World Cup Stadium is home of Jeonbuk during the K League season, but the AFC has settled on it as the neutral venue for the quarterfinals and semifinals for the East Region, which is made up of clubs from South Korea, Japan and Australia, among others. This was designed to minimize traveling and reduce infection risks during the COVID-19 pandemic. (Yonhap)