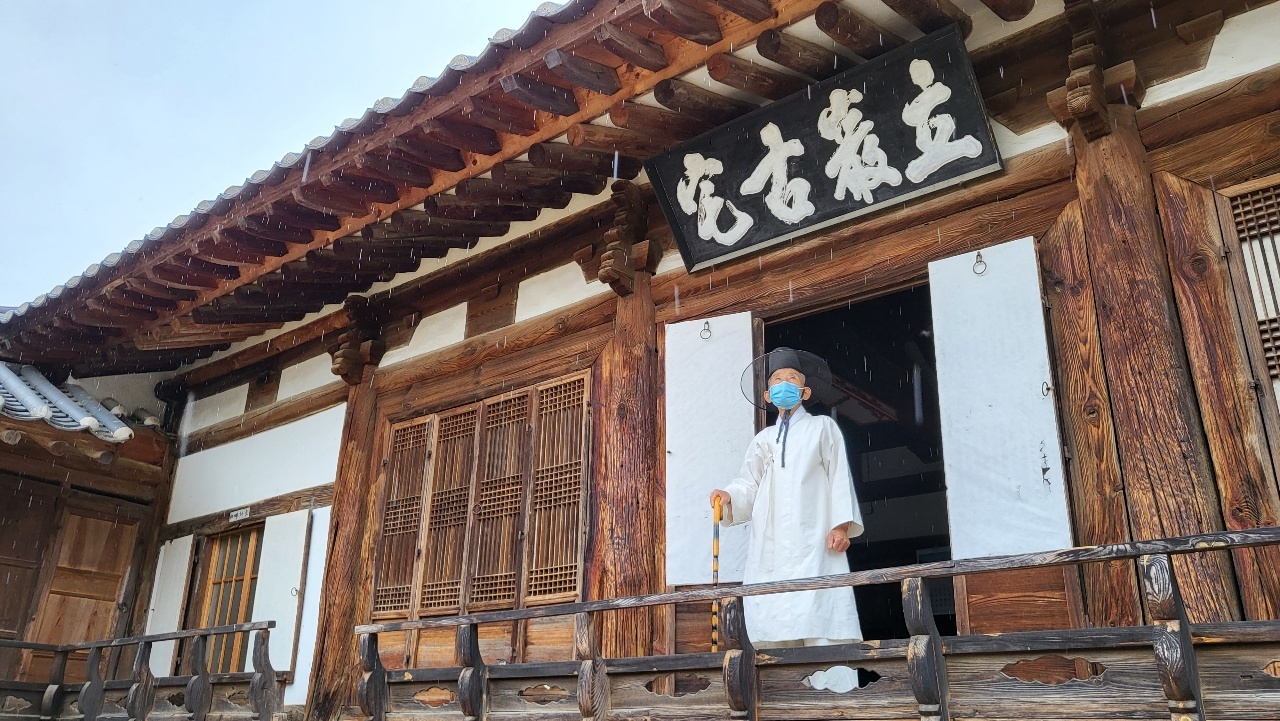 A resident in the Hahoe Folk Village looks up at the sky on a rainy afternoon. (Kim Hae-yeon/ The Korea Herald)
Unless a traveler is a history buff or a person of scholarly bent, they might not take much interest in the folktales and legends of old towns. What is new and trendy grabs more attention on social media.

Not surprisingly, many historical sites and neighborhoods stand empty -- neglected, for the most part, by travelers. But upon a closer look, these historical sites hold unique stories buried underneath the seemingly mundane landscape.

Andong, North Gyeongsang Province, is one of the cities the Korea Tourism Organization selected last year as regional hubs of tourism. It and neighboring Yeongju are just such destinations -- old cities that have fallen out of favor.

Andong and Yeongju have long been called the “village of seonbi,” meaning they were the hometowns of virtuous scholars who tried to lead lives of integrity during the Goryeo and Joseon periods.

The Korea Herald has selected four sites in Andong and Yeongju with fascinating stories behind them. 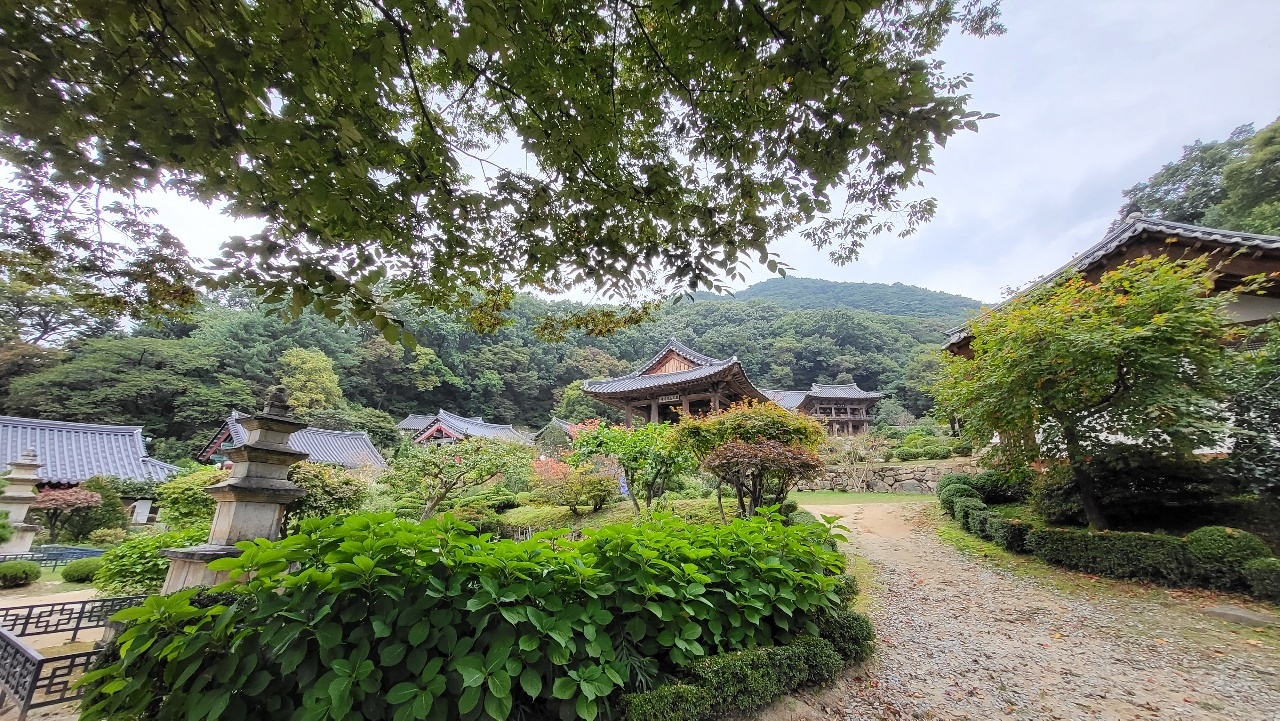 Buseoksa, as seen from the entrance (Kim Hae-yeon/ The Korea Herald)
A Buddhist temple located near Bonghwangsan in Yeongju, Buseoksa was built by Ven. Uisang in 676, during the Silla period. Buseoksa’s name literally means “the floating stone.”

According to the Samgukyusa, a collection of folktales and historical accounts about the Three Kingdoms, Uisang studied in Tang China. He lived with a family and one daughter, Sunmyo, felt deep affection for him.

But instead of accepting her love Uisang made Sunmyo his student, teaching her about Buddhism.

When the day came for Uisang to leave China, Sunmyo decided to transform herself into a dragon by throwing herself into a river as a sacrifice to protect Uisang on his trip back to Silla.

According to legend, Uisang was able to build Buseoksa at its current site thanks to Sunmyo, who expelled some 500 bandits who had been occupying the area.

Seen from afar, the symbolic stone behind Muryangsujeon, the temple’s main building, appears to be floating. The legend is that the dragon Sunmyo constantly lifts the stone and drops it to protect Uisang and Buseoksa from evil. 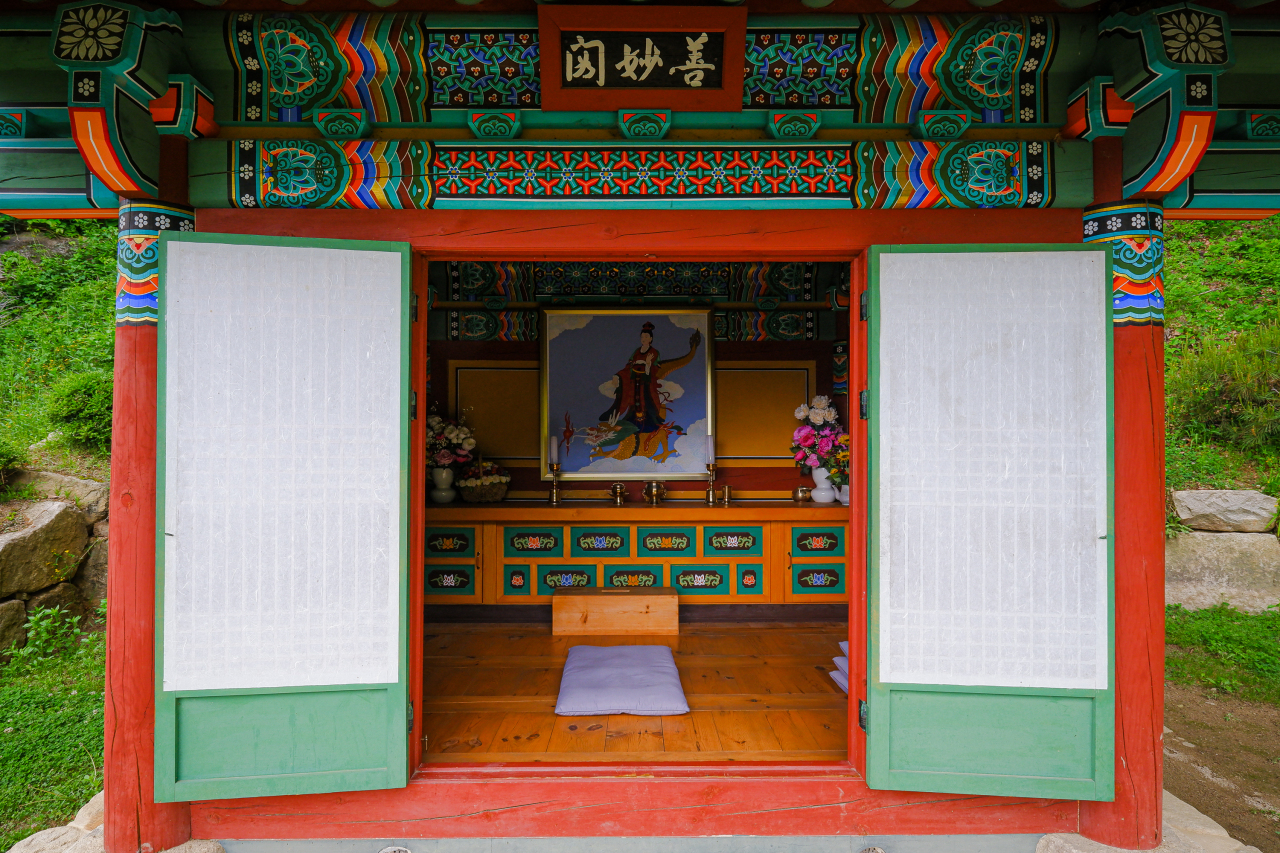 A painting of Sunmyo riding on a dragon is kept in a shrine located in Bueseoksa. (Yeongju City)
(2) Museom Village and the bridge 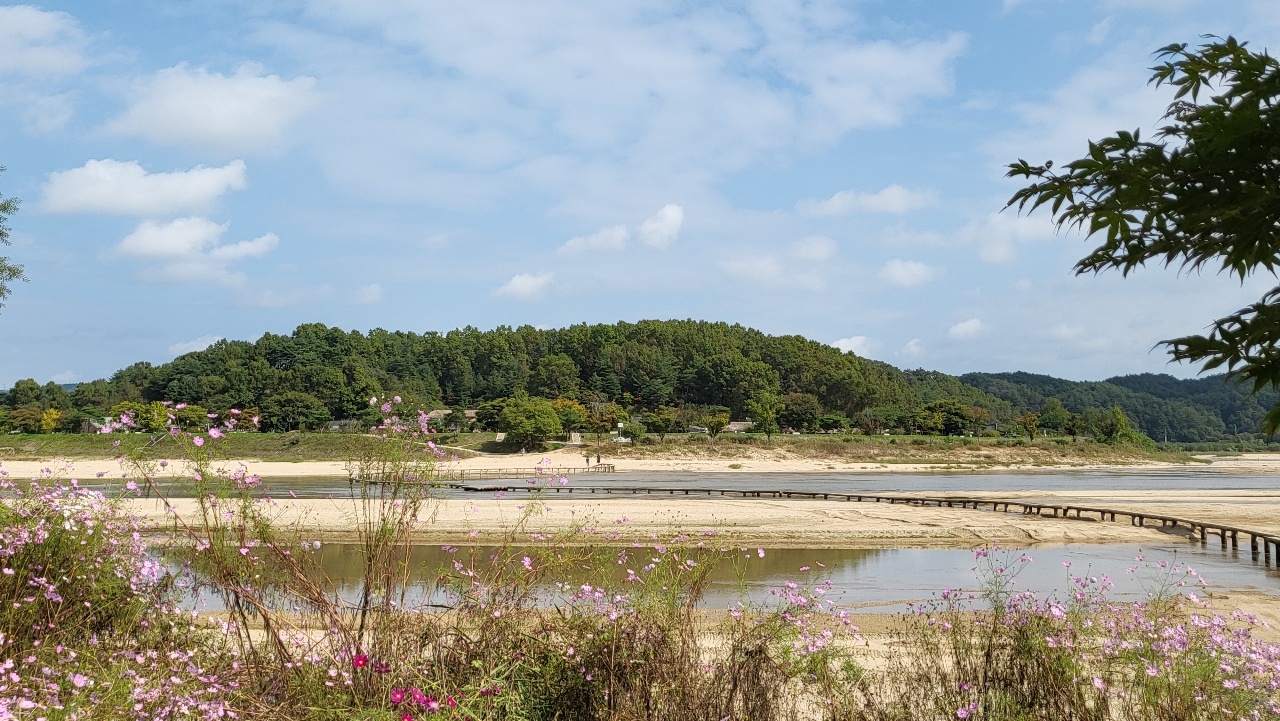 The two streams that flow from Sobaeksan and Taebaeksan meet and loop around the village in what looks like a scene of families and friends rejoicing.

Shaped like a peninsula, the village has a sandy riverside on one side and a lush forest on the other. The city hopes that the riverside area will gain recognition as a UNESCO World Heritage Site so its smooth, clean sand can be preserved for future generations.

With its oldest house dating back to 1666, the village has kept its traditional houses in good condition. Scholars and literary writers have lived in the village, including scholar-diplomat Bak Gyu-su and poet Cho Chi-hun, whose poem “Byeolli” praised the beauty of Museom Village. Currently, villagers occupy some 40 houses.

In the past there were three bridges in the village, each one serving a purpose -- farming, commuting to school and visiting neighboring towns. But it is the single log bridge -- only 30 centimeters wide but 150 meters long -- that catches everyone’s attention the moment they enter the village.

Until 1979, when the current one was built, the log bridge would be destroyed in floods during the monsoon season and rebuilt each time. Since the bridge was the village’s only connection to the outside world for some 350 years, villagers hold a festival along it each year, sending it their good wishes for safe passage and protection from danger. 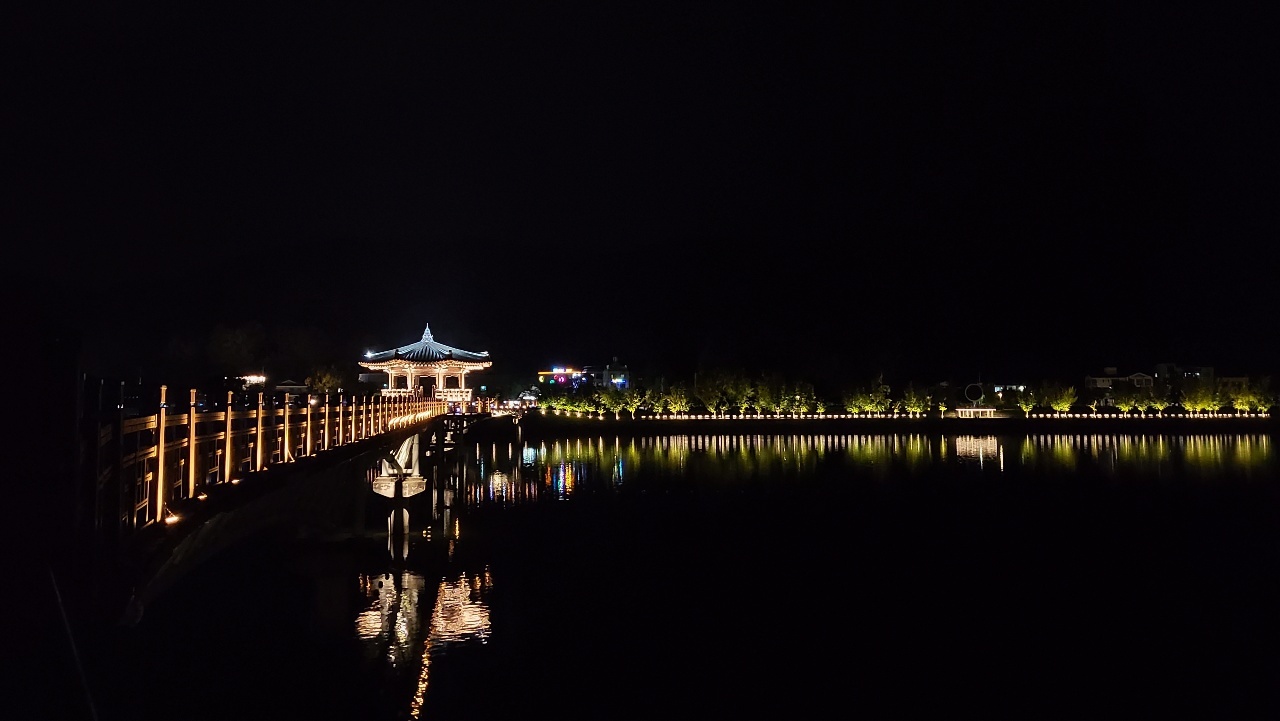 A night view of Woryeonggyo in Andong (Kim Hae-yeon/ The Korea Herald)
The best-known bridge in Andong, Woryeonggyo, is named after the nearby area of Wolgok-myeon.

At night, the moon is reflected on the Nakdong River underneath the wooden bridge, lighting up the village for a scenic view. Yet the bridge holds a tragic tale.

A letter dating back to the 16th century was discovered in 1998 when the body of a man named Lee Eung-tae was exhumed to make way for new houses.

In the letter, placed in Lee’s grave, his wife writes, “You’ve always told me that you will live with me until our hair turns gray. As proof that you’ve read this letter, please come to me secretly in my dreams.”

The wife left a pair of shoes, woven using her own hair, inside the grave with the letter. Her loving gesture was reported in the November edition of National Geographic in 2007, and has been mentioned in numerous documentaries in Korea and abroad.

The story has resulted in today’s popular story about Woryeonggyo -- that a couple who cross the bridge together while holding hands will have eternal love. 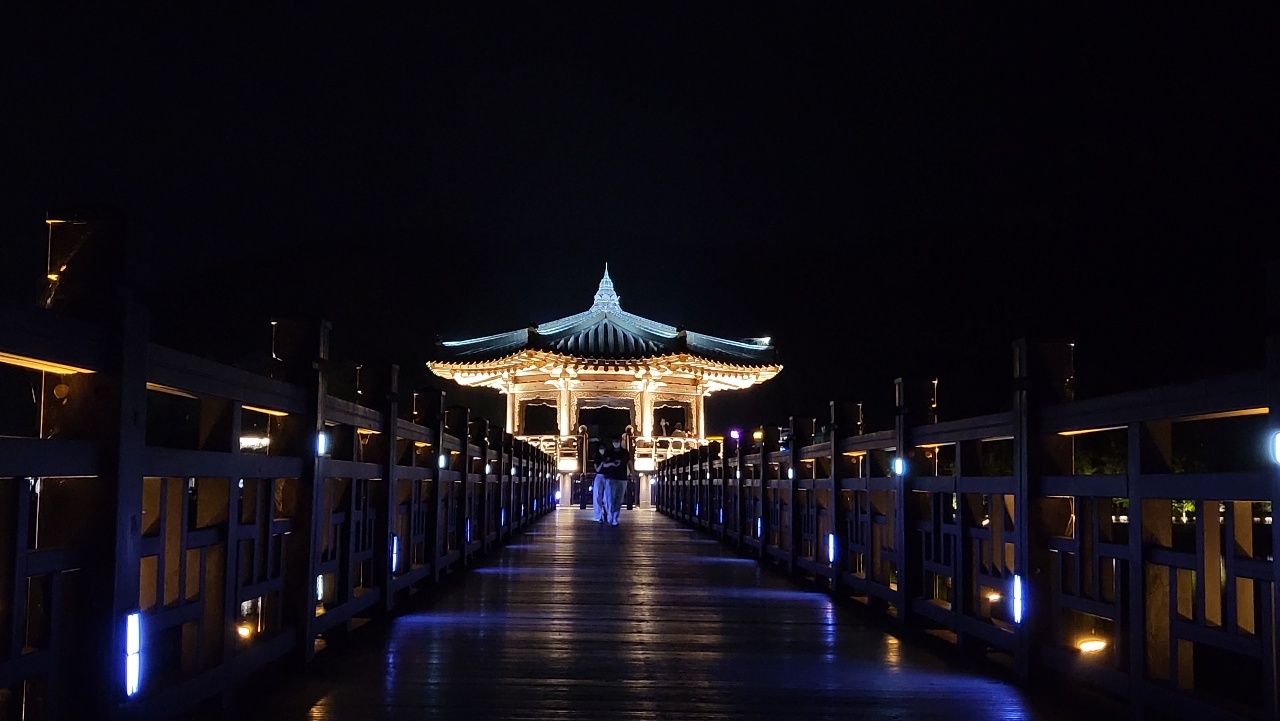 A couple walks on Woryeonggyo at night. (Kim Hae-yeon/ The Korea Herald)
(4) Hahoe Folk Village and the tree 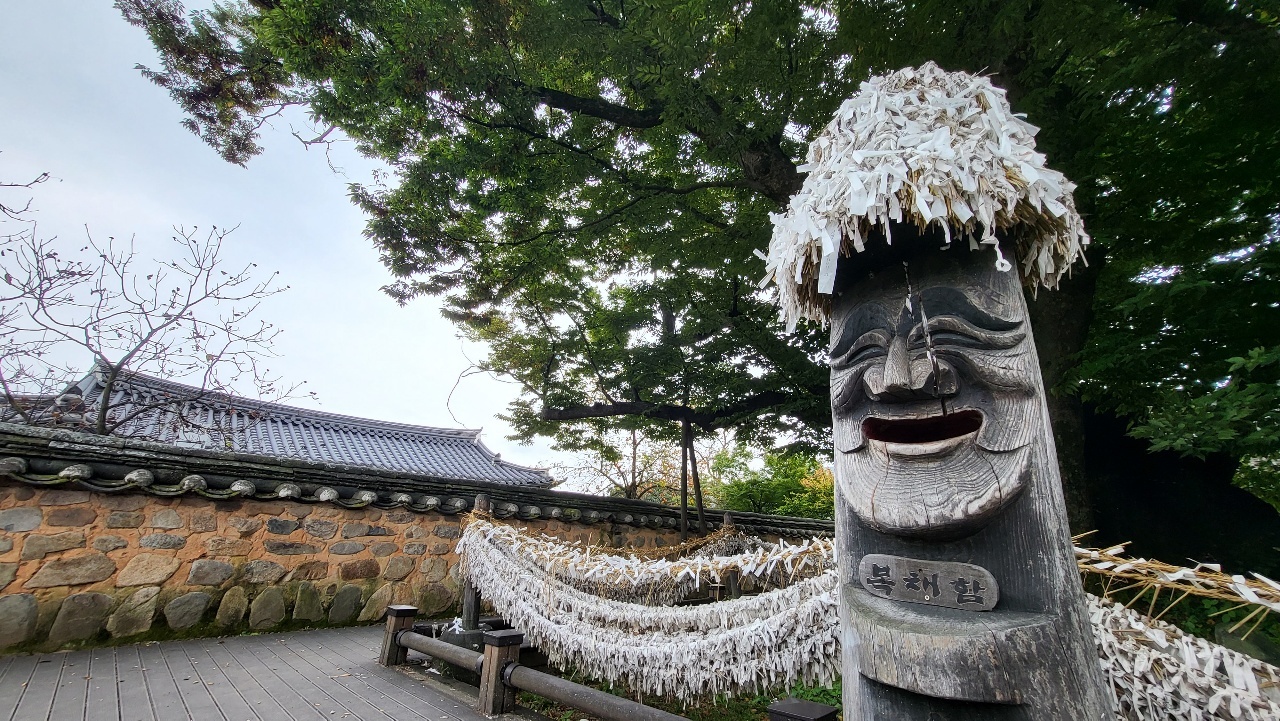 A 650-year-old zelkova tree is known as a guardian tree to the locals stands at Hahoe Folk Village (Kim Hae-yeon/ The Korea Herald)
Listed as a UNESCO World Heritage Site in 2010, Hahoe Folk Village lies south of Buyongdae at the foot of Hwasan. The village is shaped like a lotus flower.

Established in the Goryeo Kingdom, Hahoe Folk Village has thrived since the 15th century, when the Ryu clan settled there. Its well-preserved traditional houses, called hanok, have been studied by architects. Visitors can see how the surrounding walls were built in sections to prevent a full collapse in the event of an earthquake.

Although some of the houses have been modernized to accommodate the needs of travelers, signs are posted at the entrances to well-known residences with brief introductions explaining the family’s history and the structure of the house.

At the heart of the village stands a 650-year-old zelkova tree that is believed to protect the village and invite good spirits. The narrow pathway that leads to the tree is hard to find, so most first-time travelers end up walking past it.

Blank pieces of paper stacked next to the tree are there for you to write down your wish and hang on the tree.

“I was born in Andong and lived here all my life, and found out a surprising result through my own little research done at this tree in the early 2000s,” Lee Jun-yong, an Andong City cultural tour guide, told The Korea Herald.

“I estimated the ages of the writers, and made a list of what their wishes were,” Lee said.

The results were unexpected: Almost all of the younger visitors -- from those in their teens to those in their 40s -- wished for wealth or happiness for themselves, with some hoping to win the lottery. But those in their 50s and older made wishes for their children’s health and happiness, according to Lee. 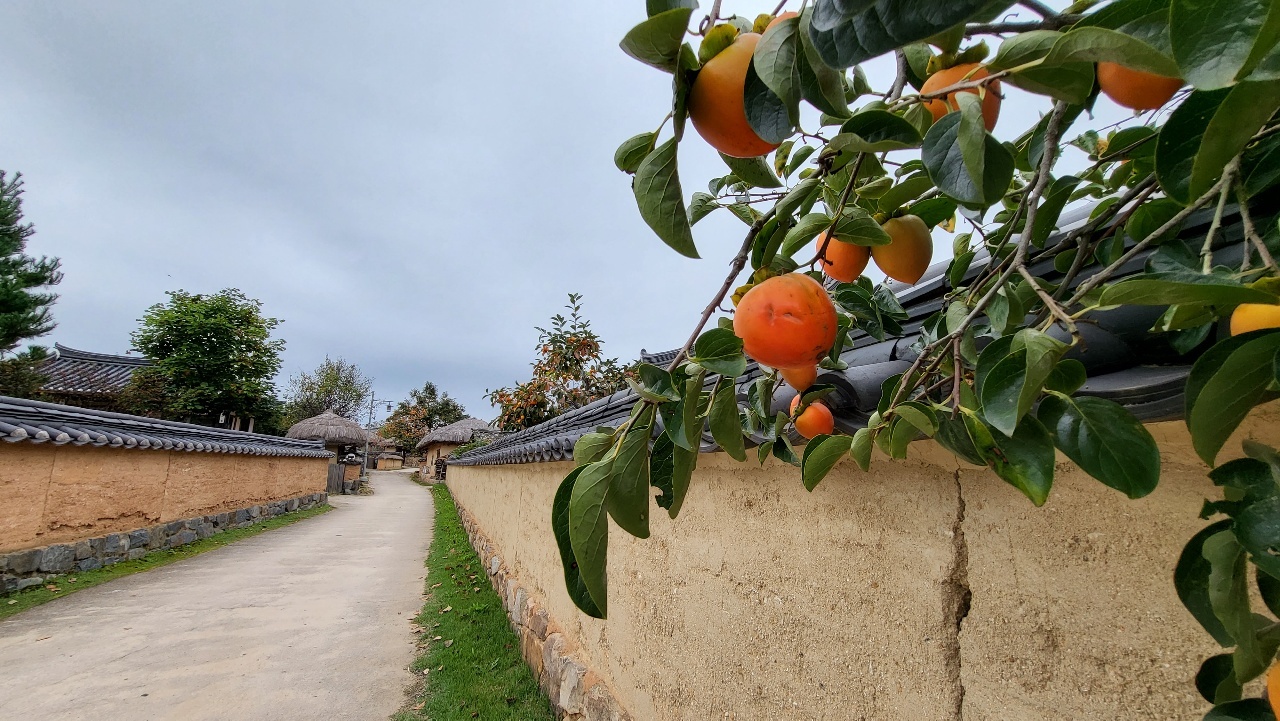 The walls of hanok are built with in divided blocks to protect the house from complete collapse during an earthquake. Kim Hae-yeon/ The Korea Herald)