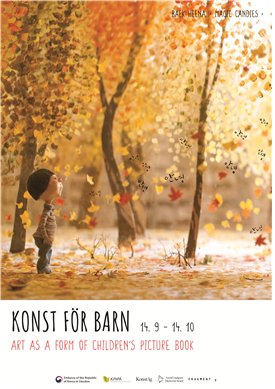 A poster for an exhibition of Korean children’s picture books in Sweden (Culture Ministry)
Events to introduce and promote South Korean literature will be held on a global scale throughout the months of October and November, the Ministry of Culture, Sports and Tourism announced Tuesday.

Events jointly organized by the Culture Ministry and the Publication Industry Promotion Agency of Korea are being held in 14 countries, including Britain, Japan, Spain and Belgium, with the aim of making Korean books more widely available.

The Korean Cultural Center in London is holding an exhibition of Korean webtoons and film-related publications at Foyles, one of London’s most time-honored bookstores, throughout October.

In Sweden, Korean picture books for children are on display until Thursday as part of an exhibition.

The ministry hopes the event in Sweden will increase public interest in Baek Heena, the Korean author and illustrator who won the 2020 Astrid Lindgren Memorial Award, an international children’s literary award given in memory of the Swedish author of “Pippi Longstocking.”