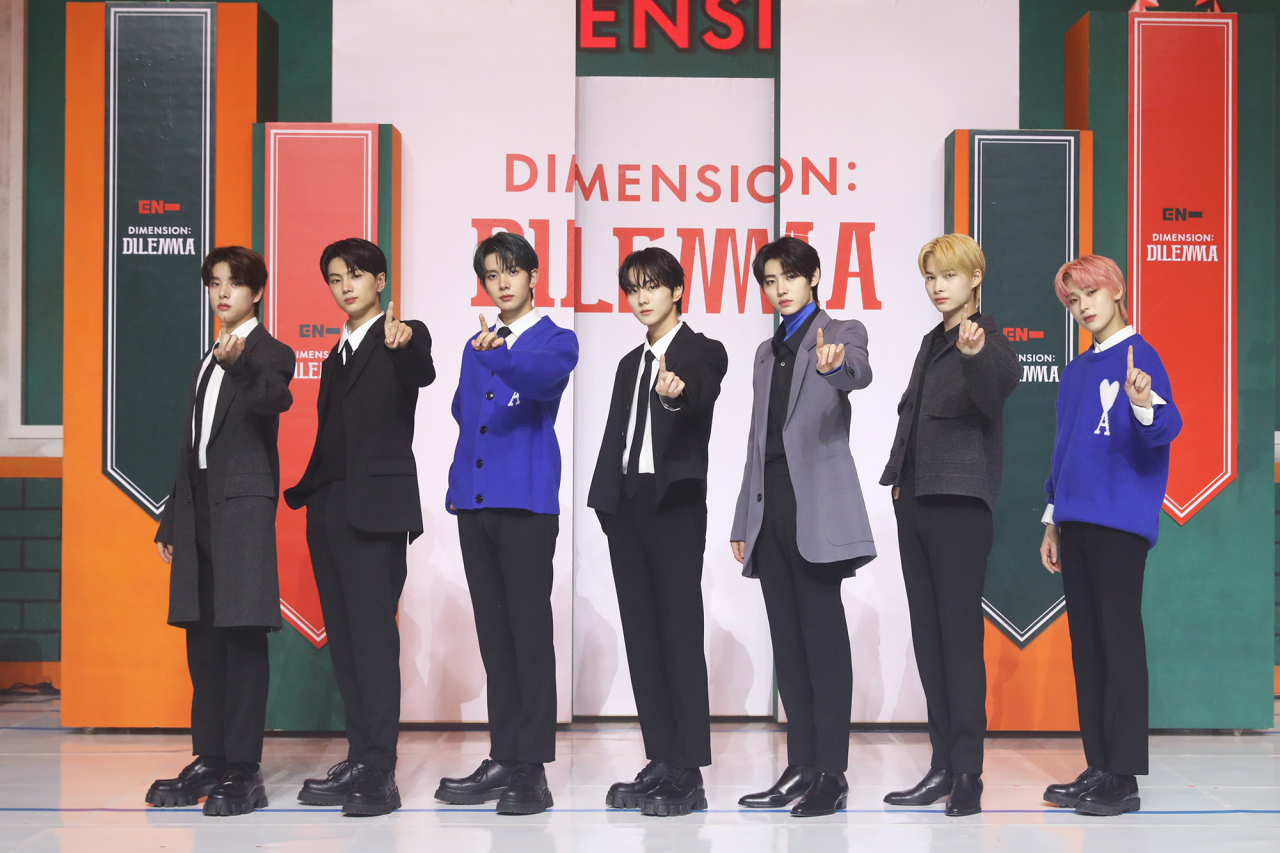 During a press conference in Seoul a day ahead of the album’s release, the bandmates spoke of their shared goal to become the No. 1 K-pop group with the new album.

“Many call us fourth-generation K-pop icons, but we’d like to go beyond that title to become the most aspiring among all K-pop idol acts,” Jungwon said during the media event, which was livestreamed due to concerns of coronavirus spread.

Closing the previous “Border” series, through which the rookie band spoke about their honest emotions in debuting, the new album marks the start to their new chapter: “Dimension.”

“If we’d been hanging somewhere on the borderline of trainees and rookie musicians during the ‘Border’ series, this time we’ll be talking in more detail about our experience and emotions we underwent during the year since debuting,” Jake explained.

Ever outspoken about their actual emotions and thoughts with their songs, the album also portrays dilemmas faced by the band.

Jungwon said, “While we aspire to hone our talents (as musicians), there are times when we need some personal space, and as much as we want to be loved by more people, we want to escape the public eye. The album embodies such dilemma we hold inside.” 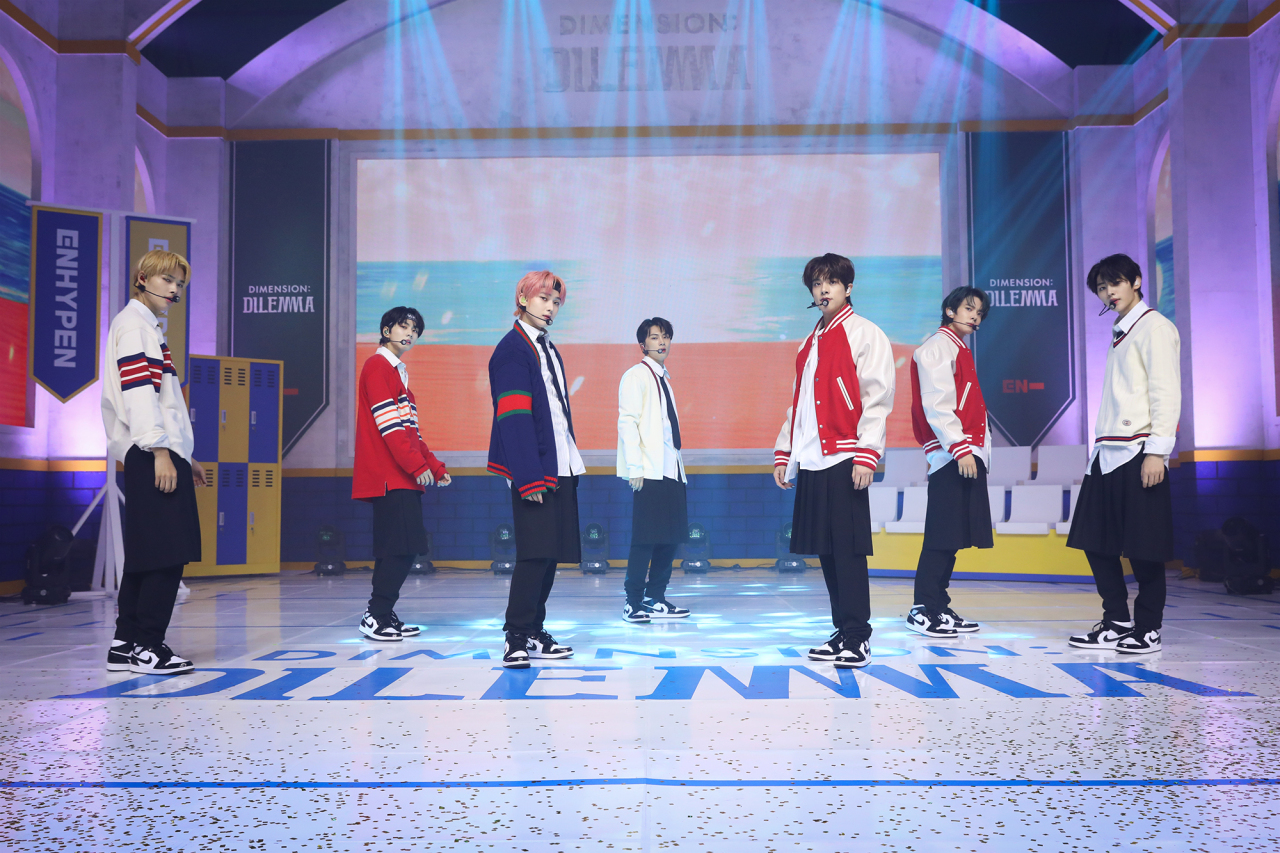 Enhypen performs to “Tamed-Dashed” during a press conference in Seoul on Tuesday. (Belift Lab)
Leading the eight-track album is “Tamed-Dashed,” a new wave track reminiscent of the ’80s, calling into question a dilemma of the choice whether to be “tamed” by one’s desires or to “dash” to find the answers to address one’s predicament.

Adhering to their dark, mysterious concept until now, Enhypen has diverged to a more vibrant, fresher concept with “Taken-Dashed.”

“We were surprised when we first heard it because it was much more upbeat than our previous lead songs. Both the song and the lyrics gave off a cool energy,” Sunghoon said, while Sunwoo shared his anticipation, saying, “We’re happy to showcase a new side of us.”

Well known for their powerful, synchronized dance performances, the septet took their choreography to another level -- this time, incorporating elements of rugby.

“We tried to show ourselves having fun and running around as we play sports and ball games,” leader Jay said, adding they actually make use of a rugby ball in their choreography.

Spending his childhood in Australia, Jake said, “I was excited to use a rugby ball in the dance because I used to play the game a lot at school back in Australia. I was confident I’ll be good with the moves.”

Executive producer Bang Si-hyuk of Hybe Labels -- to which Enhypen’s agency Belift Lab is affiliated -- also took part in the album’s production. While Bang gave some helpful advice, Jay remembered his putting particular emphasis on “making the chorus part of the choreography perfectly synchronized so that it looks like one person dancing.” 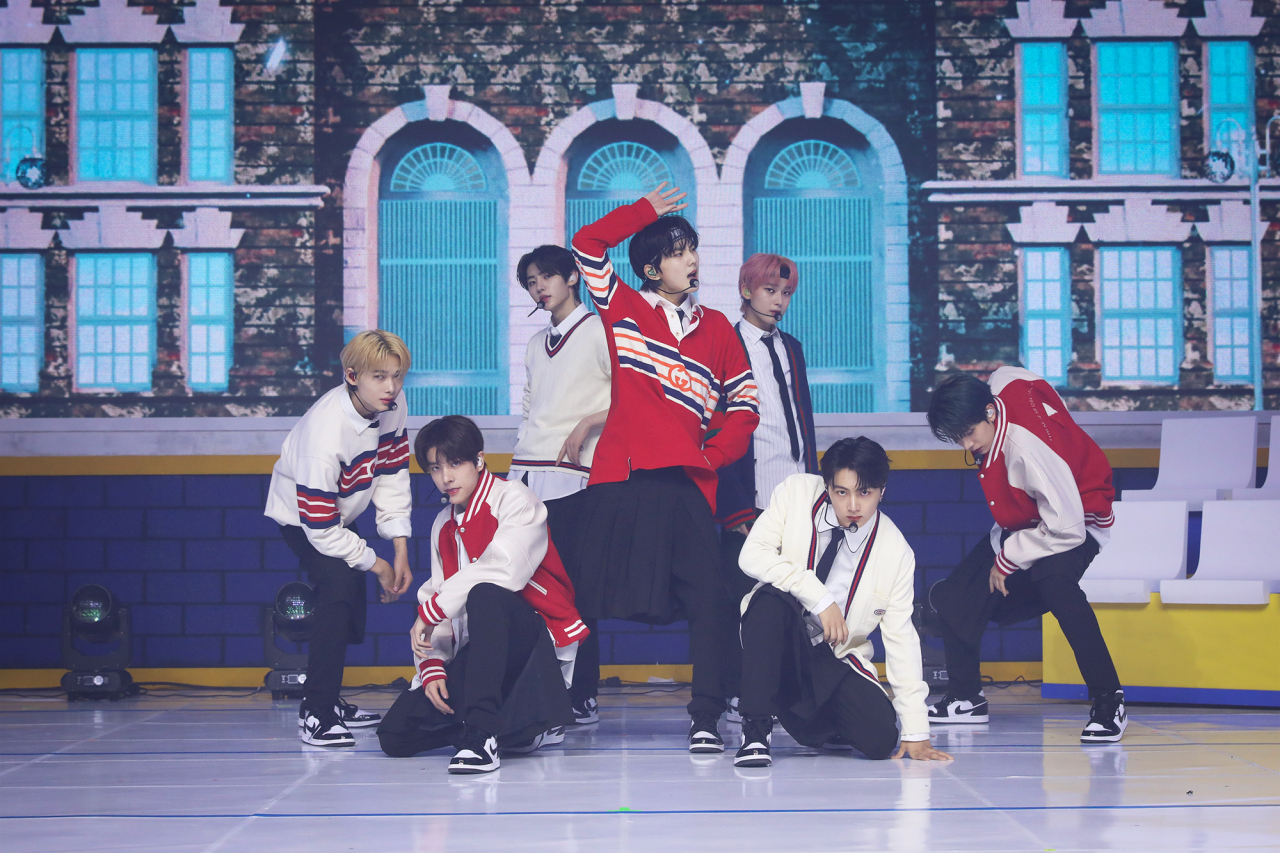 Enhypen poses for pictures during the “Dimension: Dilemma” press conference in Seoul on Tuesday. (Belift Lab)
Renowned visual director Kim Ye-young also contributed in making the album, teaming up with a K-pop boy band for the first time in her career.

Tomorrow X Together’s Yeonjun rapping on “Blockbuster” is one of the most anticipated elements from the new album.

“The song is a pop-rock genre singing the hopes of a boy who wants to live his life like an action movie character. We thought the song, with its fierce energy, should include rap verses, and thankfully Yeonjun’s featuring really upped the vibe,” Heeseung said. “It was exciting to work with an artist from outside the group for the first time, and that being a senior member from Hybe Labels was a big honor for us.”

Jay is also featured in the credits for the last track, “Interlude: Question.”

“We were given just the track and the lyrics, and with that we each decided on the structure and the tone and manner of the song’s narration. Luckily, the producer selected my idea after recording it,” Jay said. He took part in recording the narration with Heeseung and Jake.

Composed of the seven final winners of Mnet competition show “I-Land” last year, the group made a grand debut in November with their first EP, “Border: Day One.”

Looking back on their collective journey, Japanese member Ni-ki said, “It is still sometimes unreal that we’ve gone through so many things to debut as Enhypen, but seeing more and more people loving our performances and rooting for us reminds us that we need to work harder to return their love.”

“I think our attitudes on the stage and minds about music are what’s changed the most (since our debut). If our goal had been just to debut before, receiving more love from people, we now want to become better with every new stage. We’ve worked hard to tell our stories sincerely to those who say they’re consoled by our music,” Heeseung said. 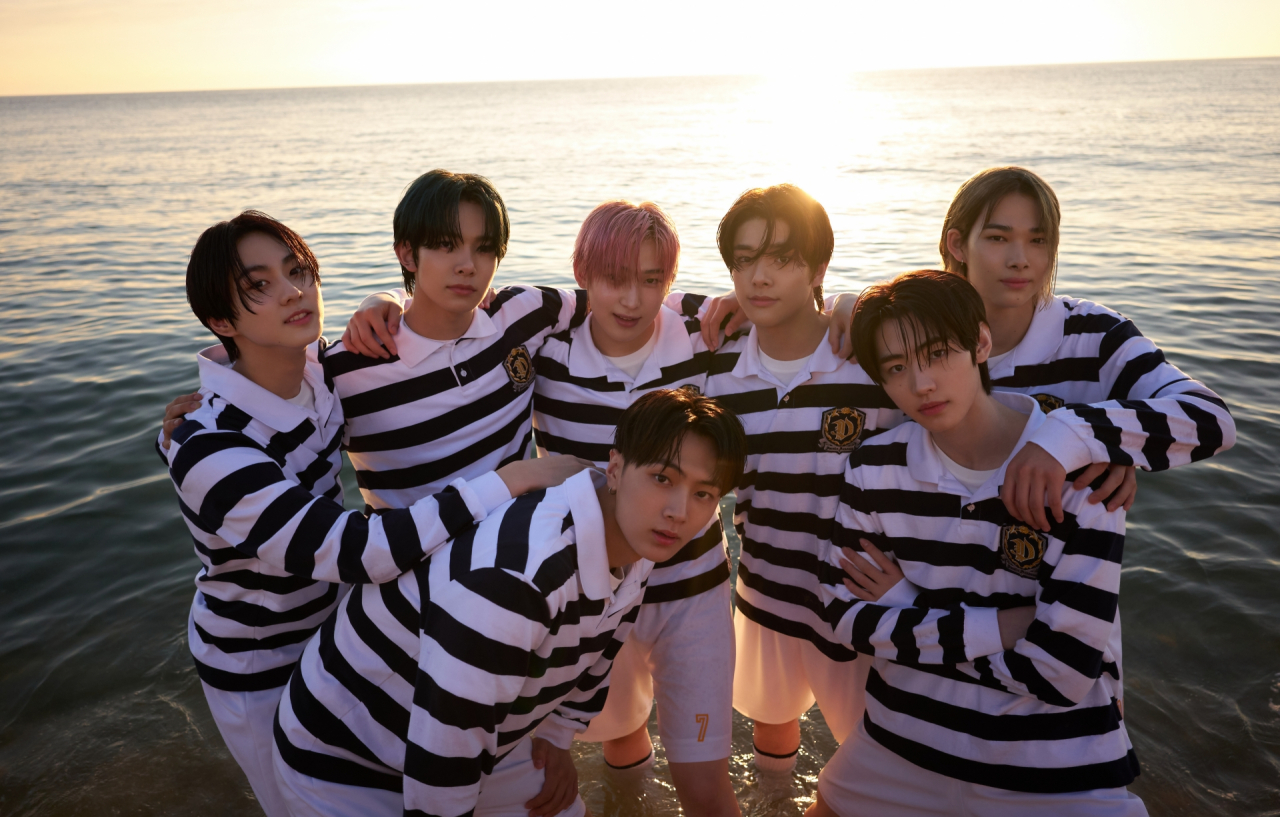 Teaser image of Enhypen’s “Dimension: Dilemma” (Belift Lab)
Setting new records with every comeback, the rookie act has already set a new high in preorder sales for “Dimension: Dilemma,” with over 920,000 copies sold ahead of the album’s release.

Debuting “Border: Carnival” on Billboard’s main albums chart, the Billboard 200, at No. 18, the group saw the highest rank scored by any K-pop rookie act who debuted in 2020 or 2021.

“We’re really grateful to our fans, Engenes. We hope to rank high on the domestic music charts and win No. 1s on TV music shows,” Sunwoo said.

About their wishes for the remaining quarter of 2021, Jake said, “I know other members will probably think the same, but we really want to perform in front of Engenes. We had such a good time at our first fan meetup this February, and we really miss them.”

Hybe and Mnet recently announced that the second season of “I-Land” will air next year, and asked to give advice to future contestants, Jay responded, “I can actually still remember back then very clearly. I think that Enhypen exists now because of the time we’ve spent together, striving to become singers with others who share the same dream. I hope that you guys don’t forget that dream you have right now, your hopes to make your music heard. I wish you all the best.”