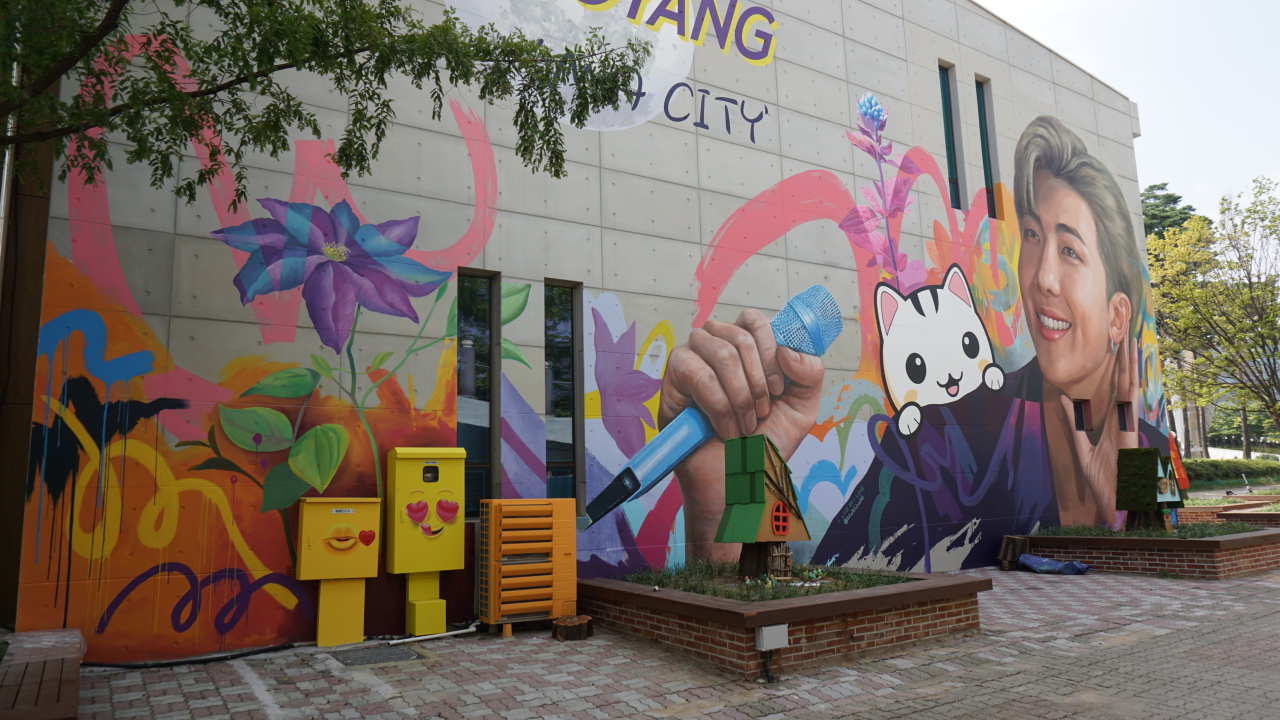 A mural of RM, a member of K-pop sensation BTS, is painted on the side of the Goyang Tourist Information Center. (Goyang City)
On Sept. 12, Goyang City unveiled a new tourist attraction after weeks of painting: a mural of K-pop star RM of boy band BTS. The rapper grew up in Ilsan, a district within Goyang, Gyeonggi Province, on the outskirts of the capital.

In August, Goyang City Hall said it was partnering with the artist’s fandom, MoNiJunNi, on a special project to celebrate his 28th birthday. The city and MoNiJunNi jointly announced that they would paint an 18-by-12-meter mural on the side of the Goyang Tourist Information Center to welcome travelers.

The rapper’s love for his hometown was the biggest factor in the city’s decision.

During the 75th session of the UN General Assembly in September, RM opened his speech by talking about Ilsan. He described it as a “really beautiful place with a lake, hills and even an annual flower festival.”

“I spent a very happy childhood there, and I was just an ordinary boy. I used to look up at the night sky and wonder, and I used to dream the dreams of a boy,” RM said in a powerful speech about self-love.

RM also mentioned Ilsan in the lyrics to “Ma City,” the B-side track on the band’s fourth extended-play album, “The Most Beautiful Moment in Life pt. 2.”

“Ilsan is the place I want to be buried after I die,” he wrote. “It’s the city of the flower, city of Mon.” Mon refers to RM’s former stage name, Rap Monster.

As soon as the mural was revealed to the public, it caused a buzz on social media. Several fans of the septet traveled to Ilsan from other parts of the nation and wrote messages on the wall. “RM, the son of Ilsan,” read one message. “I live, so I love,” read another.

“These would bring a seismic change in the city and emerge as Instagrammable spots. Also, the CJ LiveCity arena for K-pop concerts would create notable effects in synergy,” Lee said.