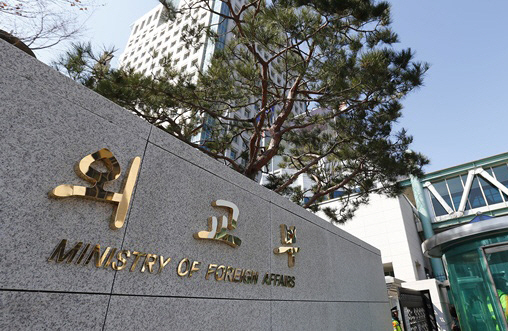 (Yonhap)
South Korea remains committed to working closely with the United States on measures that would bring North Korea back to dialogue, including envisioned humanitarian cooperation with Pyongyang, the foreign ministry said Friday.

The ministry made the point in a policy report for the parliamentary audit, as Seoul seeks to resume the stalled nuclear diplomacy with the North despite the regime's renewed saber-rattling with a series of weapons tests, including the latest reported test of a new anti-aircraft missile.

Seoul has said the humanitarian cooperation can be the most effective confidence-building measure. The US has expressed support for humanitarian assistance consistent with international standards to help the most vulnerable North Koreans.

To advance the peace process on the Korean Peninsula, the ministry vowed to strengthen communications with Japan bilaterally, as well as the trilateral cooperation involving the United States.

"We continue strategic communications with Japan, including bilateral talks between the foreign ministers and between the top nuclear envoys, for the coordination, cooperation and support for the pursuit of our denuclearization strategy," the ministry said.

"The three-way coordination among South Korea, the US and Japan will continue through the talks among the top diplomats and the chief nuclear negotiators," it said. (Yonhap)