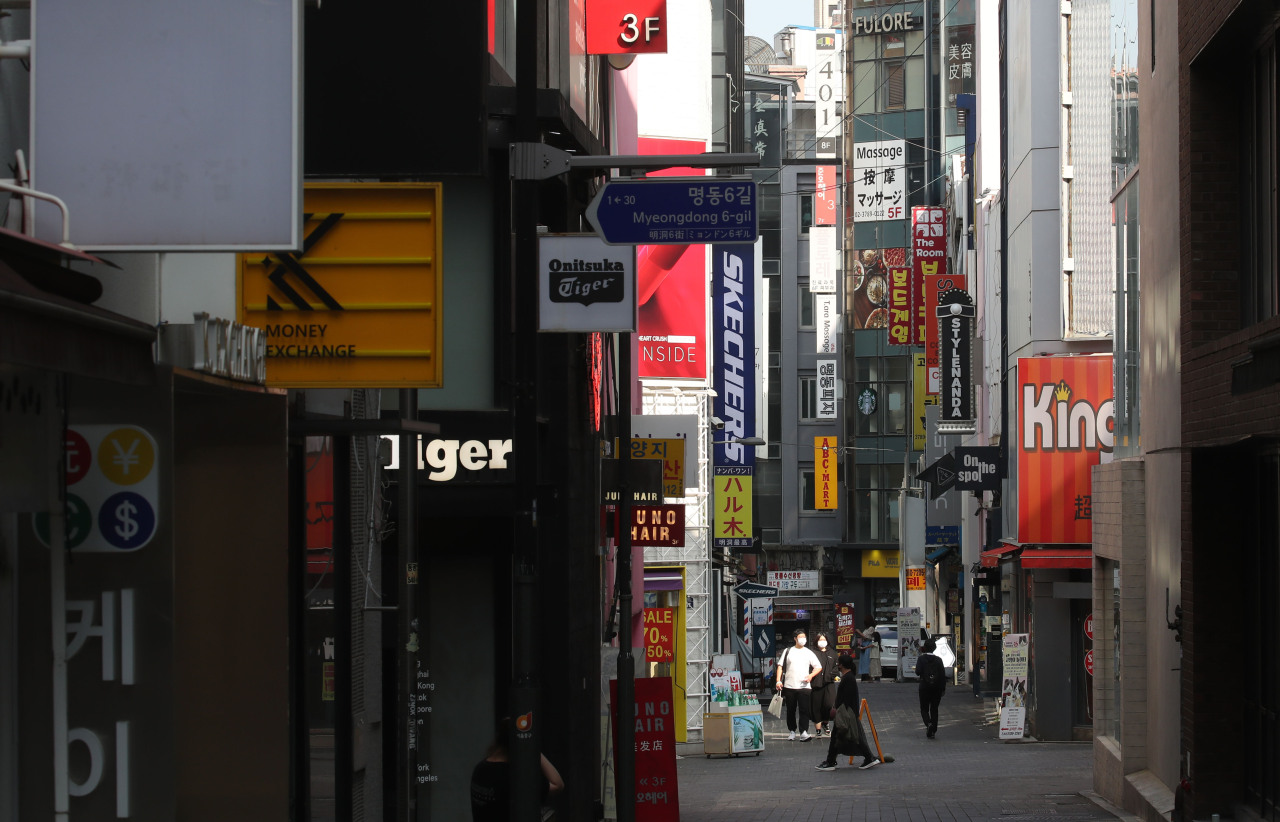 This file photo, taken Sept. 30, 2021, shows the relatively empty tourist hotspot of Myeongdong in central Seoul amid the country's fourth wave of the pandemic. (Yonhap)
South Korea's daily coronavirus cases remained in the 2,000s for the sixth consecutive day Friday, prompting authorities to maintain the current level of virus restrictions for another two weeks ahead of back-to-back extended weekends this month.

The country reported 2,486 new COVID-19 cases, including 2,451 local infections, bringing the total caseload to 313,773, according to the Korea Disease Control and Prevention Agency (KDCA).

The country's fourth wave of the pandemic has worsened in the aftermath of the fall harvest Chuseok holiday last week, when masses traveled nationwide, with daily cases reaching a record high of 3,271 on Saturday.

Prime Minister Kim Boo-kyum said in an interagency meeting the country will maintain the current social distancing measures, which caps the number of people in private gatherings, for two more weeks starting Monday to clamp down on the recent surge in viruses.

The greater Seoul area has been under Level 4 distancing measures, the highest in the country's four-tier system, since July, while other areas are under Level 3.

The decision comes before two extended weekends this month that health authorities expect will lead to more travel and fuel an even greater spread of the virus.

Authorities are betting on the restrictions to keep the virus situation under control as they aim for a return to normalcy later this year when the majority of the population becomes fully vaccinated.

Health Minister Kwon Deok-cheol said earlier this week that the country could start changing its virus strategy as early as later this month to eventually treat COVID-19 just like the seasonal flu.

Of the locally transmitted cases, the Seoul metropolitan area, home to half of the nation's 51.3 million population and the nation's virus hot bed in the latest wave, took up 76.7 percent of the total.

Areas outside the capital region have seen a rise in cases, with the southern city of Daegu reporting 84 new cases.

New cases from overseas arrivals, which include South Koreans, came to 35.

The number of patients with serious symptoms across the country reached 323, down 13 from the previous day.

The total number of people released from quarantine after making full recoveries was 275,576, up 1,371 from a day earlier. (Yonhap)