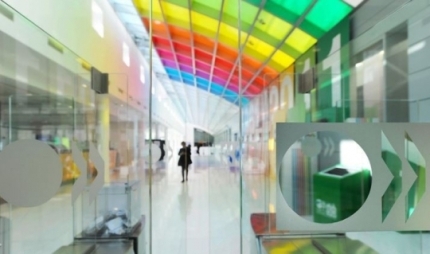 As for the employment rate for men, Korea also fell far behind its Asia-Pacific neighbors -- such as Japan, which topped the list, and New Zealand -- as well as some emerging economies.

According to the OECD, the women’s employment rate in Korea posted 57.5 percent in the second quarter of this year. The figure is calculated as the portion of those employed among the female working-age population, which is 15-64.

This placed the nation at 27th of the 33 surveyed. Of the total 38 OECD members, the Paris-based organization has yet to compile or make public the relevant figures of five members -- Denmark, Greece, Ireland, Luxembourg and Turkey. 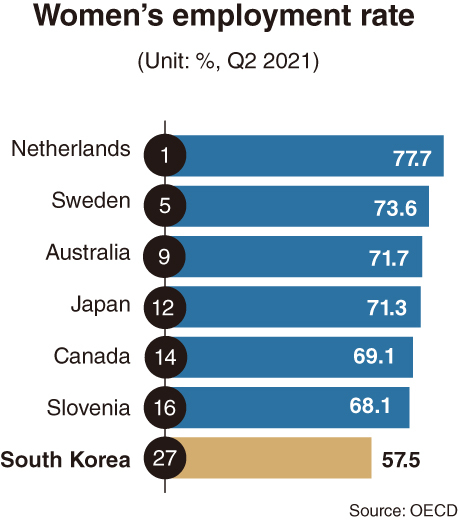 (Graphic by Kim Sun-young/The Korea Herald)
Korea lagged far behind neighbors in the Asia-Pacific region: 71.3 percent was reported for women in Japan (12th), 71.7 percent in Australia (ninth) and 73.5 percent in New Zealand (sixth).

The top 10 in the female employment ranking included the Netherlands (No. 1 at 77.7 percent), Iceland, Norway, Switzerland, Sweden, Germany, the UK and Finland.

While the average of Group of 7 countries reached 65.9 percent, 69.1 percent was seen in Canada, along with 64.2 percent in the US and 64.1 percent in France. The OECD average has yet to be publicized.

As for men’s employment rate in the OECD analysis, Korea ranked 18th among the 33 members with 75.1 percent in the corresponding second quarter.

Meanwhile, local data shows the serious situation of Korea’s hiring market, in which the proportion of nonregular jobs -- such as of temporary workers and part-timers -- has continued to increase.

According to Statistics Korea, 45 percent of all women workers in the nation were in nonregular job positions as of August 2020 -- 4.09 million of 9.08 million employed women.

The percentage posted its highest number since the nation started compiling the relevant data in 2003. While it was tied with 45 percent in 2019, the previous high was 44 percent, posted in August 2009, when the nation was hit by the global financial crisis.

Some government officials argued that the rapid growth between 2017 and 2019 in the number of nonregular jobs is due to the reclassification of some regular workers, totaling about 350,000-500,000 as nonregular workers in 2019.

They highlighted “a new standard” set by the Switzerland-based International Labor Organization.