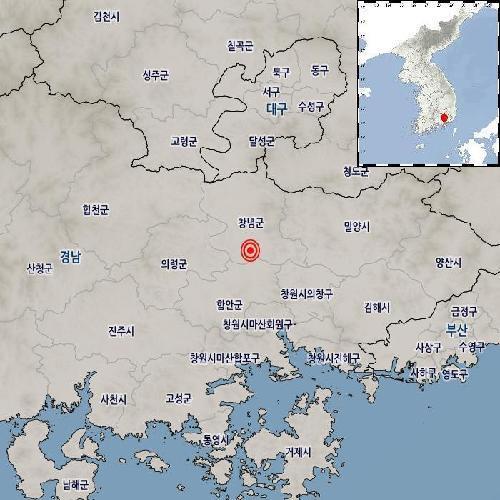 This image, provided by the Korea Meteorological Administration, shows the epicenter of an earthquake that hit Changnyeong, about 350 kilometers southeast of Seoul, on Thursday. (PHOTO NOT FOR SALE) (Yonhap)
A 2.6 magnitude earthquake struck South Korea's southeastern region Thursday afternoon, the state weather agency said.

The quake occurred about 14 kilometers south of Changnyeong, about 350 kilometers southeast of Seoul, at 12:02 p.m., according to the Korea Meteorological Administration (KMA).

It was the sixth strongest quake to hit the Korean Peninsula to date this year.

The quake's tremor was recorded at level 4 on the seismic intensity scale in South Gyeongsang Province, where the epicenter was located. Level 4 means that many people can feel the tremor indoors while windows and kitchenware clatter.

The southwestern South Jeolla Province and southeastern cities of Busan and Daegu, as well as North Gyeongsang Province, reported a tremor of level 2, which could only be felt by those high up in buildings or silent environments.

The KMA asked people to be mindful of their safety as the tremor could be felt in regions close to the epicenter. (Yonhap)