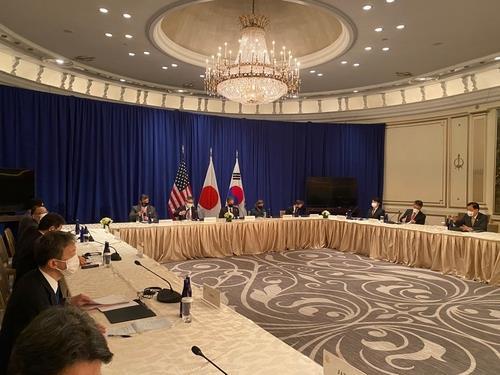 The meeting between South Korean Foreign Minister Chung Eui-yong, Japanese Foreign Minister Toshimitsu Motegi and US Secretary of State Antony Blinken was held on the sidelines of the U.N. General Assembly on Wednesday (local time).

"The secretary and ministers of the three countries will discuss the Korean Peninsula issue and other regional and global matters," a Seoul official said earlier.

The trilateral meeting also comes after South Korean President Moon Jae-in called for efforts to formally end the 1950-53 Korean War in his address to the U.N. General Assembly here this week.

It also comes after North Korea test-fired a short-range ballistic missile earlier this month in what the US has called a violation of multiple U.N. Security Council resolutions.

Chung and his Japanese and US counterparts last held three-way talks in London in May. (Yonhap)