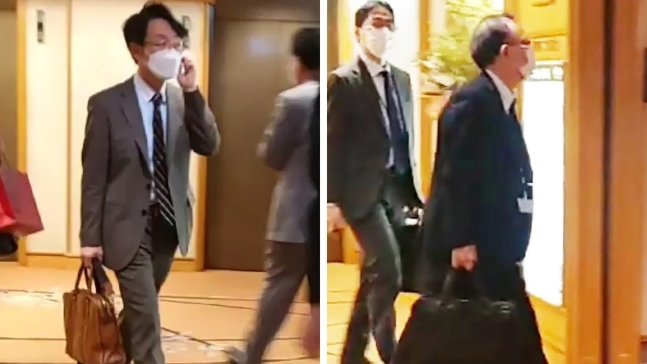 Lee Sang-ryol (left), director general for Asian and Pacific affairs at Seoul's foreign ministry, and his Japanese counterpart, Takehiro Funakoshi, moving to a conference room at a hotel in Tokyo in April. (Yonhap)
Diplomats of South Korea and Japan held talks in Tokyo on Thursday to discuss the security situation on the Korean Peninsula and historical issues between the two countries, the foreign ministry said, after tensions flared anew with North Korea's recent missile launches.

The talks between Lee Sang-ryol, the ministry's director general for Asian and Pacific affairs, and his Japanese counterpart, Takehiro Funakoshi, came after the North fired off two short-range ballistic missiles on Wednesday following its weekend cruise missile launches.

Lee and Funakoshi reaffirmed the importance of cooperation between South Korea and Japan, and between the two countries and the United States, for stability on the peninsula and progress in efforts for lasting peace here, the ministry said.

When Funakoshi explained Tokyo's position on its claims to South Korea's easternmost islets of Dokdo, Lee reiterated that Seoul can't accept any such territorial claim to the East Sea outcroppings.

The two sides, however, agreed to continue close communication for the "future-oriented" development of relations between the two countries.

Concerning people-to-people exchanges in the midst of the COVID-19 pandemic, Lee underscored the urgent need for measures to allow business people and students to travel freely between the countries "under certain conditions," the ministry said. (Yonhap)