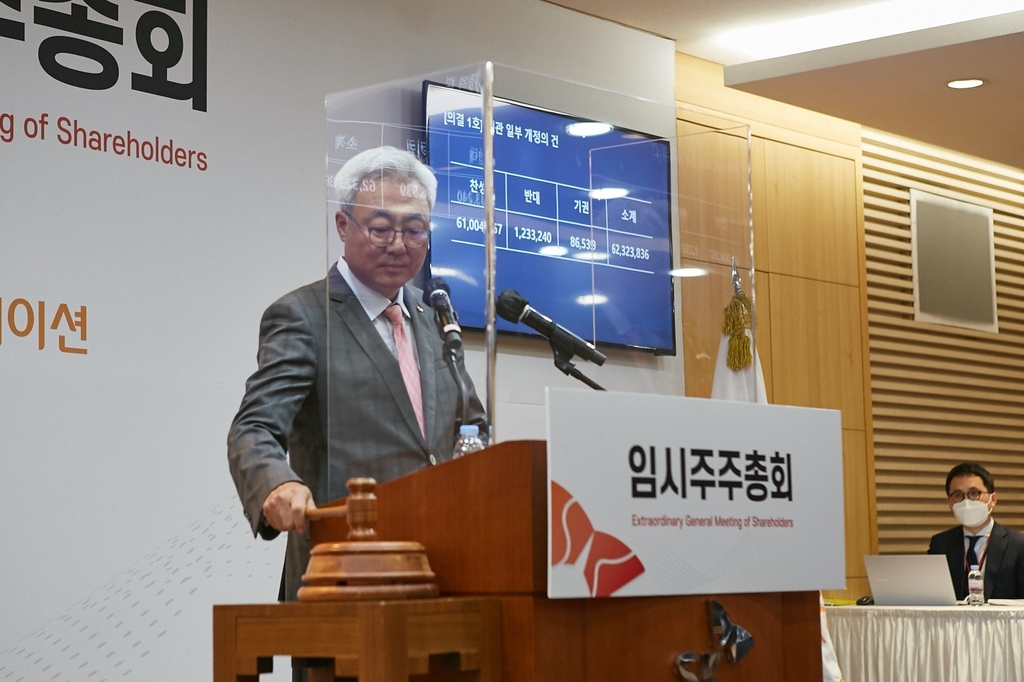 With the approval, the refinery-to-battery subsidiary under South Korea's No. 3 conglomerate, SK Group, will be split into two entities that are respectively in charge of its battery and petrochemical businesses. The new entities will be officially launched Oct. 1.

SK Innovation will serve as a holding firm in charge of developing its eco-friendly business portfolio.

"The (battery unit) split-off is aimed at boosting the market valuation of the new growth driver and spurring its further growth," SK Innovation said in a statement. "It will pave the way for raising both corporate and shareholder value of SK Innovation."

The corporate restructuring plan was widely expected to get a green light as SK Inc., the group's holding firm, holds a 33.4 percent stake in the firm, and other major institutional investors had supported the plan.

The state-run National Pension Service, its second-largest shareholder with an 8.1 percent share, however, voted against the split, saying hiving off the battery business could undermine the shareholder value of SK Innovation.

The latest move is essentially aimed at expanding the battery business to take advantage of the growing electric vehicle market under its plan to invest 30 billion won ($26.5 billion) over the next five years to transition from a carbon-intensive model to green business.

The world's No. 6 battery maker said it has bagged over 1 terawatt-hours worth of EV battery orders, estimated at around 130 trillion won, and expects additional deals from global automakers.

Its clients include Volkswagen and Ford in the United States, Daimler in Europe, and Hyundai Motor and Kia in Asia, and it manufactures batteries at factories in South Korea, China, the US and Hungary.

SK Innovation and American automaker Ford Motor have agreed to establish a 6 trillion-won joint venture to build a battery factory with 60 gigawatt hours of production in the US by 2025.

Market watchers widely expect SK Innovation may push for an initial public offering of the independent battery business and explore ways to form joint ventures to continue to make large investments in the promising sector.

In sharp contrast with its battery business, SK Innovation plans to phase out its new investment in the oil refining business, which takes up over half of its overall business.

SK Innovation said it aims to increase the proportion of its eco-friendly business from the current 30 percent of the total to 70 percent by 2025 to reduce its carbon footprint and create new business opportunities.