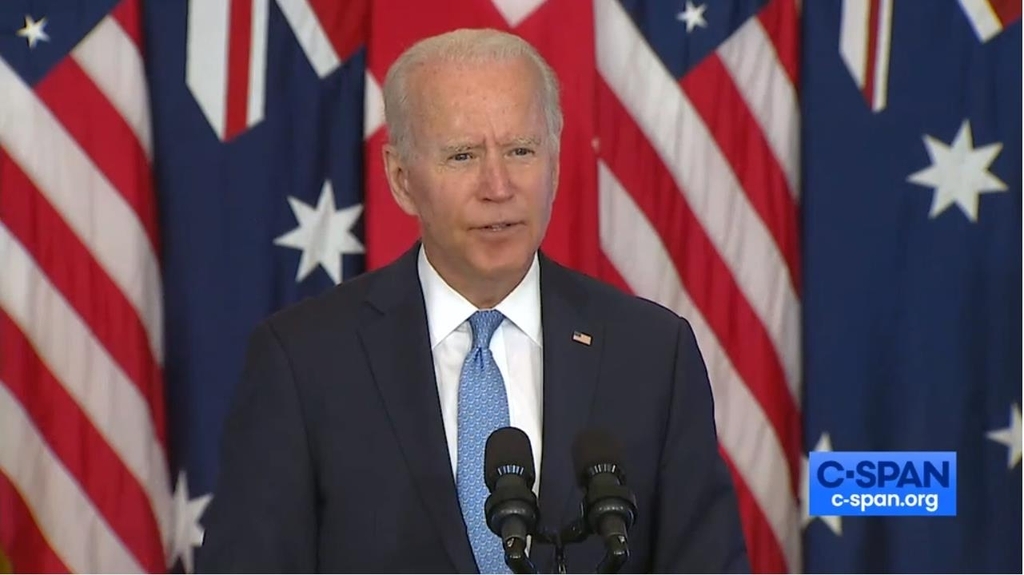 US President Joe Biden speaks in a press conference at the White House in Washington on Wednesday, to announce the launch of a new security partnership in the Indo-Pacific, called AUKUS, that involves Australia and Britain, in this image captured from the website of US cable news network C-Span. (Yonhap)
The United States on Wednesday announced the launch of a new trilateral security partnership in the Indo-Pacific that President Joe Biden said marks a "historic step" in deepening his country's cooperation with Australia and Britain.

"Today we're taking another historic step to deepen and formalize cooperation among all three of our nations because we all recognize the imperative of ensuring peace and stability in the Indo-Pacific over the long term," he added.
As a first step, Biden said the countries will consult on Australia's acquisition of nuclear-powered submarines over the next 18 months, reiterating that the submarines will only be nuclear-powered, not nuclear-armed.

"I want to be exceedingly clear about this. We're not talking about nuclear-armed submarines. These are conventionally armed submarines that are powered by nuclear reactors," Biden said.

A senior US administration official earlier said it will be a "one-off" deal and US support for Australia's acquisition of nuclear submarines will not pose any proliferation risks.

"I do want to underscore that the Biden administration remains deeply committed to American leadership in nonproliferation. This is nuclear propulsion. Australia has no intention of pursuing nuclear weapons," the official said in a telephone press conference.

The official added the last time the US had shared such technology with a foreign country was with Britain in 1958.

"This is, frankly, an exception to our policy in many respects. I do not anticipate that this will be undertaken in other circumstances going forward," he said while speaking on condition of anonymity. "We do this as a one-off. We do believe that this is complementary to other forms of security and political engagement in the region."

South Korea is currently seeking to acquire or develop a nuclear-powered submarine.

A nuclear accord between Seoul and Washington prohibits South Korea from using US technology to develop nuclear capabilities, including a nuclear-powered submarine.

The official said the new partnership would be part of ongoing US efforts to maintain peace and stability in the Indo-Pacific that he said also includes bilateral engagements with other US allies, such as South Korea.

"Again, you've seen very strong statements and engagements with Japan and South Korea and the Philippines to date ... This is all about developing integrated, effective web of engagement, about sustaining the operating system of Asia. The rules based order has been so good for all of us over these many years and we hope into the future," the official said.

The new trilateral initiative comes amid a growing competition with China, with the US frequently accusing China of undermining the rules-based order in the East and South China seas.

The US official argued the new trilateral partnership is not aimed at any one country.

"I do want to just underscore very clearly. This partnership is not aimed or about any one country. (It) is about advancing our strategic interests, upholding the international rules based order and promoting peace and stability in the Indo Pacific," he said.

"This is about a larger effort to sustain the fabric of engagement and deterrence in the Indo-Pacific. We have a history of innovation, upgrading capabilities, I would urge you to look in this context." (Yonhap)