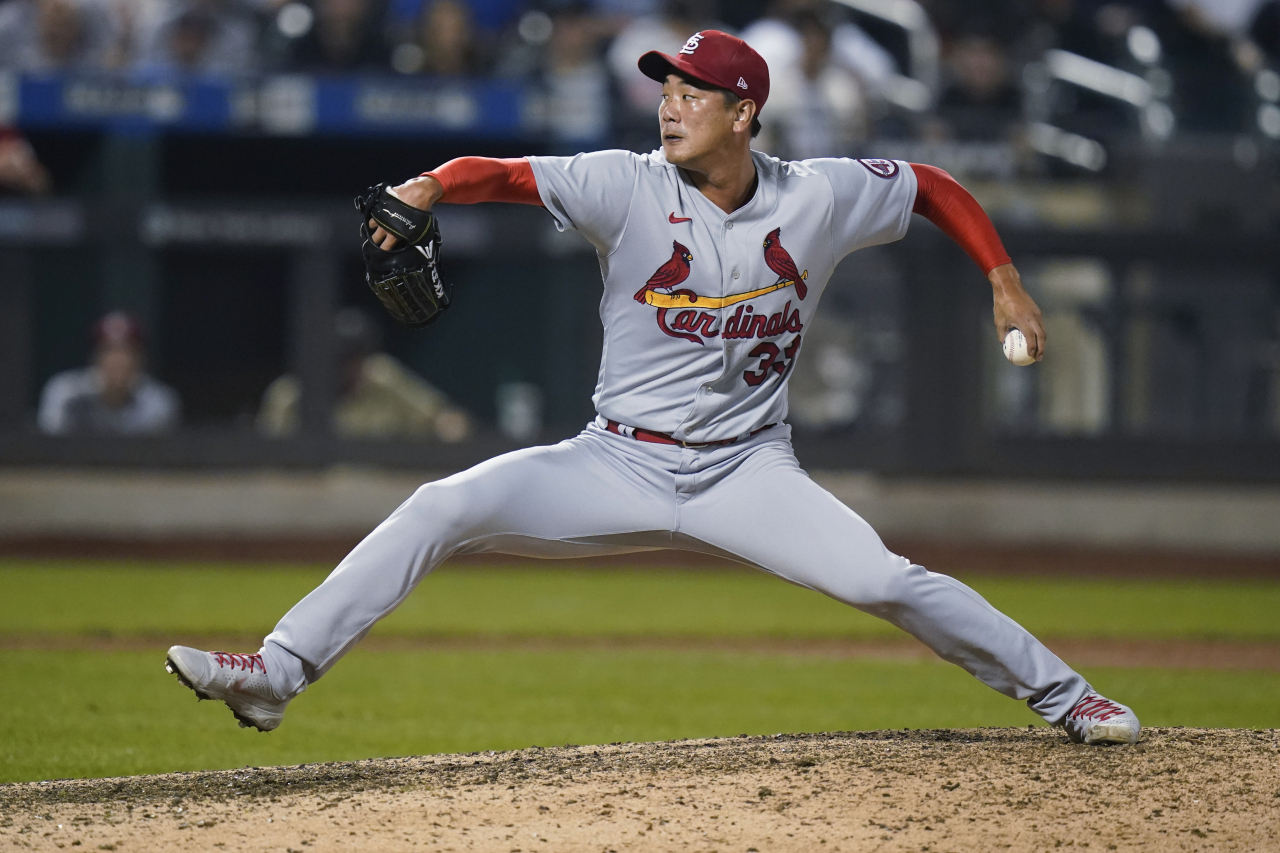 In this Associated Press photo, Kim Kwang-hyun of the St. Louis Cardinals pitches against the New York Mets during the bottom of the 11th inning of a Major League Baseball regular season game at Citi Field in New York on Tuesday. (AP-Yonhap)
Starter-turned-reliever Kim Kwang-hyun has recorded his first save of the season for the St. Louis Cardinals, helping his club move into a playoff position.

The South Korean left-hander closed out the Cardinals' 7-6 victory over the New York Mets in 11 innings at Citi Field in New York on Tuesday (local time). This was Kim's first save of 2021 and second save of his major league career. He picked up a save in his big league debut last year.

As the eighth St. Louis pitcher of the game, Kim gave up two runs, both unearned, on a hit and a walk in one inning of work.

Kim began the season in the starting rotation, but the Cardinals moved him to the bullpen last week. He is 6-7 for the season and has a 3.63 ERA over 24 games, including three relief appearances.

The Cardinals scored three times in the 11th and took a 7-4 lead into the bottom half of that inning. Per extra-inning rules, the Mets had a runner at second base to start the inning.

Kim retired Michael Conforto on a flyout to left field, and Francisco Lindor, the runner at second, advanced to third base on the play. And Pete Alonso brought him home with a double off Kim.

Kim intentionally walked Javy Baez to set up a potential double play. And Kim induced a groundball off the bat of Jeff McNeil, but the Cardinals only got the lead runner at second as McNeil beat the throw to first base.

With runners at the corners, Kevin Pillar hit a tapper to the left of Kim, whose wide throw pulled first baseman Paul Goldschmidt off the bag. Alonso scored to make it a 7-6 game, and Kim was charged with an error.

But the left-hander regrouped and retired Albert Almora on a groundout to preserve the win.

The Cardinals have now won four straight games and moved half a game ahead of the San Diego Padres and the Cincinnati Reds for the second Wild Card spot in the National League. (Yonhap)