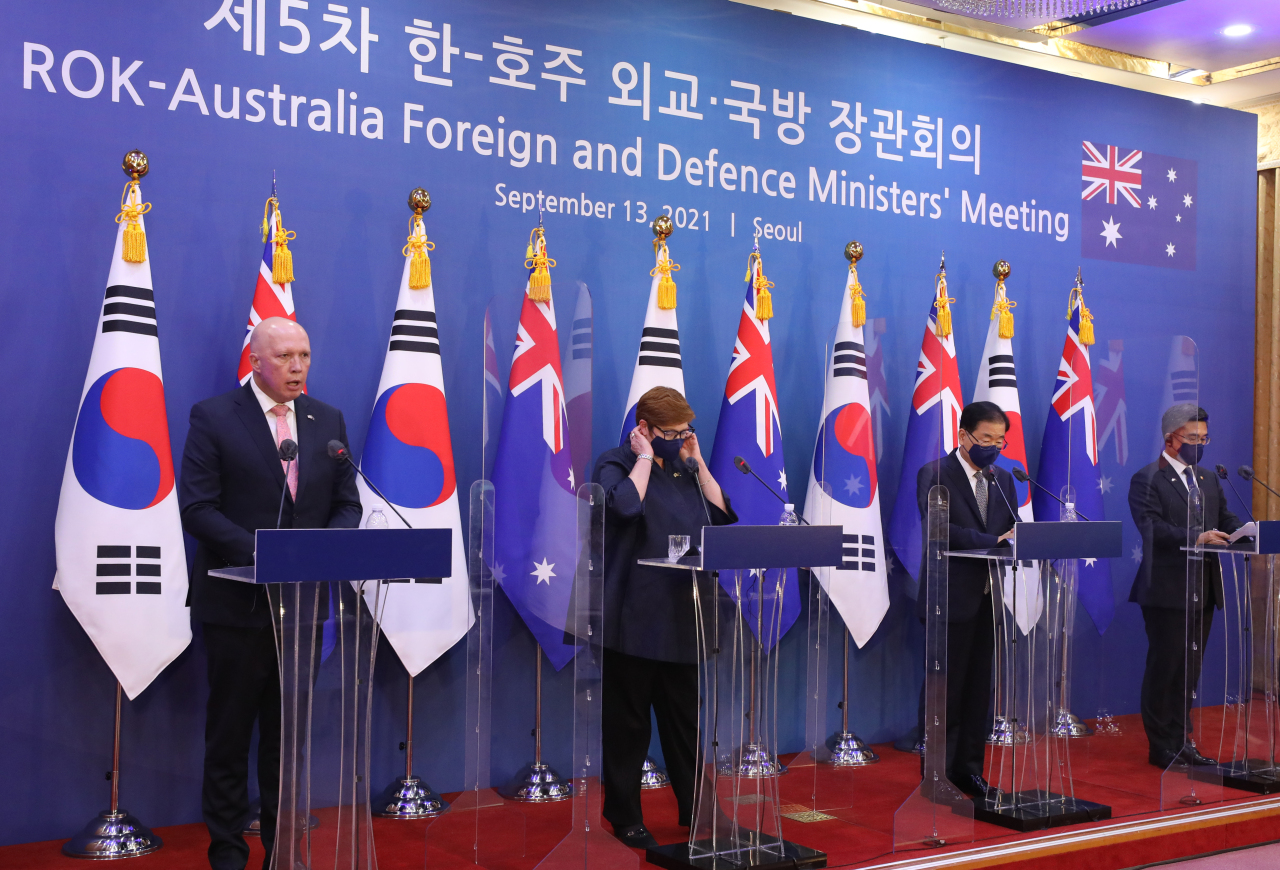 The talks between South Korea and Australia, two staunch allies of the United States, came amid an intensifying Sino-U.S. rivalry and concerns over the North's recent cruise missile launches and signs of its reactivation of a nuclear reactor.

Commenting on the North's recent provocative moves, Chung highlighted the pressing need to resume dialogue with the recalcitrant regime.

"The resumption of nuclear and missile activities underscores the urgency of dialogue with the North, engagement or diplomacy for the fundamental resolutions of such problems," Chung said.

Payne stressed the importance of engagement with Pyongyang, while reiterating Australia's commitment to enforcing international and autonomous sanctions until the North takes "clear steps" towards "the complete, verifiable and irreversible denucelarization."

"We agreed that permanent peace and stability on the peninsula will only be achieved through dialogue," she said.

The two countries' ministers did not make any direct mention of China, but stressed their cooperation in preserving shared values like democracy and human rights.

"Australia and Korea are strong, like-minded democracies and we share a similar outlook for a secure, open, prosperous Indo-Pacific that relies on free trade and the rule of law," Payne said.

Stressing an increasingly uncertain and contested strategic environment, Dutton said "We face it together."

Asked about Australia's stance on the idea of South Korea joining the "Five Eyes" intelligence alliance and the Qaud security forum, Payne said she doesn't think they necessarily need to be extended because every participant has its own bilateral and multilateral relationships around the region.

The Five Eyes grouping consists of the United States, Britain, Australia, Canada, New Zealand, the United Kingdom. The Qaud forum is comprised of the U.S., Japan, Australia and India.

Ahead of the two plus two talks, Suh and Dutton met one-on-one to discuss cooperation in the security and defense industry fields, including Seoul's plan to participate in the Australia-led multilateral air exercise named Pitch Black next year, the defense ministry said.