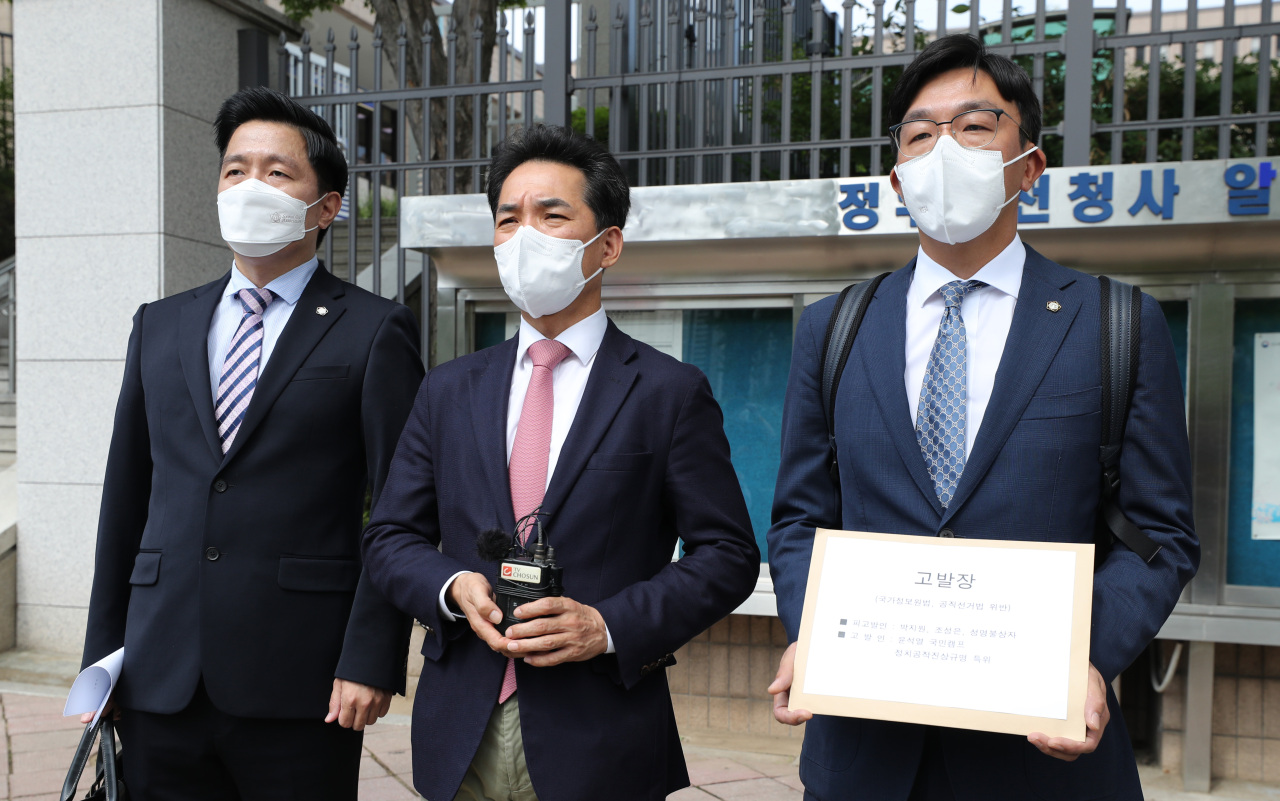 Lawyers of Yoon Seok-youl’s election camp hold a press conference in front of the Gwacheon Government Complex on Monday before filing charges against NIS chief Park Jie-won for violating the National Intelligence Service Act and the Public Official Election Act. (Yonhap)
The allegations surrounding conservative presidential hopeful Yoon Seok-youl are expanding, with Yoon accusing the head of the National Intelligence Service of meddling in a presidential election.

On Monday, Yoon reported NIS chief Park Jie-won and informant Cho Sung-eun to the Corruption Investigation Office for High-ranking Officials, in a countermove for coming under investigation for allegations raised by Cho.

On Sept. 2, online news outlet Newsverse reported allegations that Yoon ordered Rep. Kim Woong of the main opposition People Power Party to file a complaint with the prosecution against politicians and journalists linked to the ruling Democratic Party of Korea ahead of last year’s general elections. Prosecutor Son Jun-sung, then chief of investigative information policy at the Supreme Prosecutors’ Office, was allegedly involved in the political plot.

Following the news report, Yoon and Son have come under investigation over alleged abuse of authority, violation of the Public Official Election Act, leakage of official secrets and violation of the Personal Information Protection Act.

In response, Yoon raised suspicion on the NIS head’s involvement in tipping off the press, contending Park and Cho discussed it over lunch at Lotte Hotel in Seoul last month. Yoon accused three people -- Park, Cho and an unidentified person believed to have attended the lunch meeting.

Yoon’s side said in the complaint, “The defendants conspired to prevent Yoon from being elected president through false revelations and to spread false information through internet media outlet Newsverse on Sept. 2.”

“Park Jie-won should clear up his position on allegations of conspiracy with Cho Sung-eun,” People Power Party leader Lee Jun-seok said on the day. “If the explanation is insufficient, the opposition party will demand the resignation or replacement of the NIS chief.”

The public is anxious about a situation in which the head of the intelligence agency appears on the political page of the news, Lee said.

Also, 13 lawmakers from the opposition party released a joint statement to urge the National Assembly to immediately gather the intelligence committee to investigate allegations of political manipulation.

The ruling Democratic Party strongly criticized Yoon and the opposition party for muddying the water.

Spokesperson Lee So-young said, “Yoon tries to muddy the waters by bringing up the NIS chief, who has never been involved in the process of prosecuting political prosecutors.”

Party leader Song Young-gil said, “Yoon and the opposition party are writing a cheap political novel that talks about the NIS’ intervention by nitpicking a meal between Park and the informant.”

“It is typical old politics that tries to attack messengers if they cannot refute the message,” Song added.

While Yoon faces political headwinds, another presidential hopeful, Rep. Hong Joon-pyo, a strong contender in the opposition bloc, has seen a rise in popularity.

According to a recent poll, Gyeonggi Province Gov. Lee Jae-myung, a candidate from the ruling bloc, had 27.8 percent support and Yoon stood at 26.4 percent. The survey consulted 1,004 people nationwide and was released by the Korea Society Opinion Institute on Monday.

Although the two have maintained their spots atop the polls, Hong and Lee Nak-yon, former leader of the Democratic Party, are quickly catching up. Hong received 16.4 percent support while Lee Nak-yon marked 16.3 percent, respectively up by 2.8 percentage points and 4.6 percentage points from the previous week.