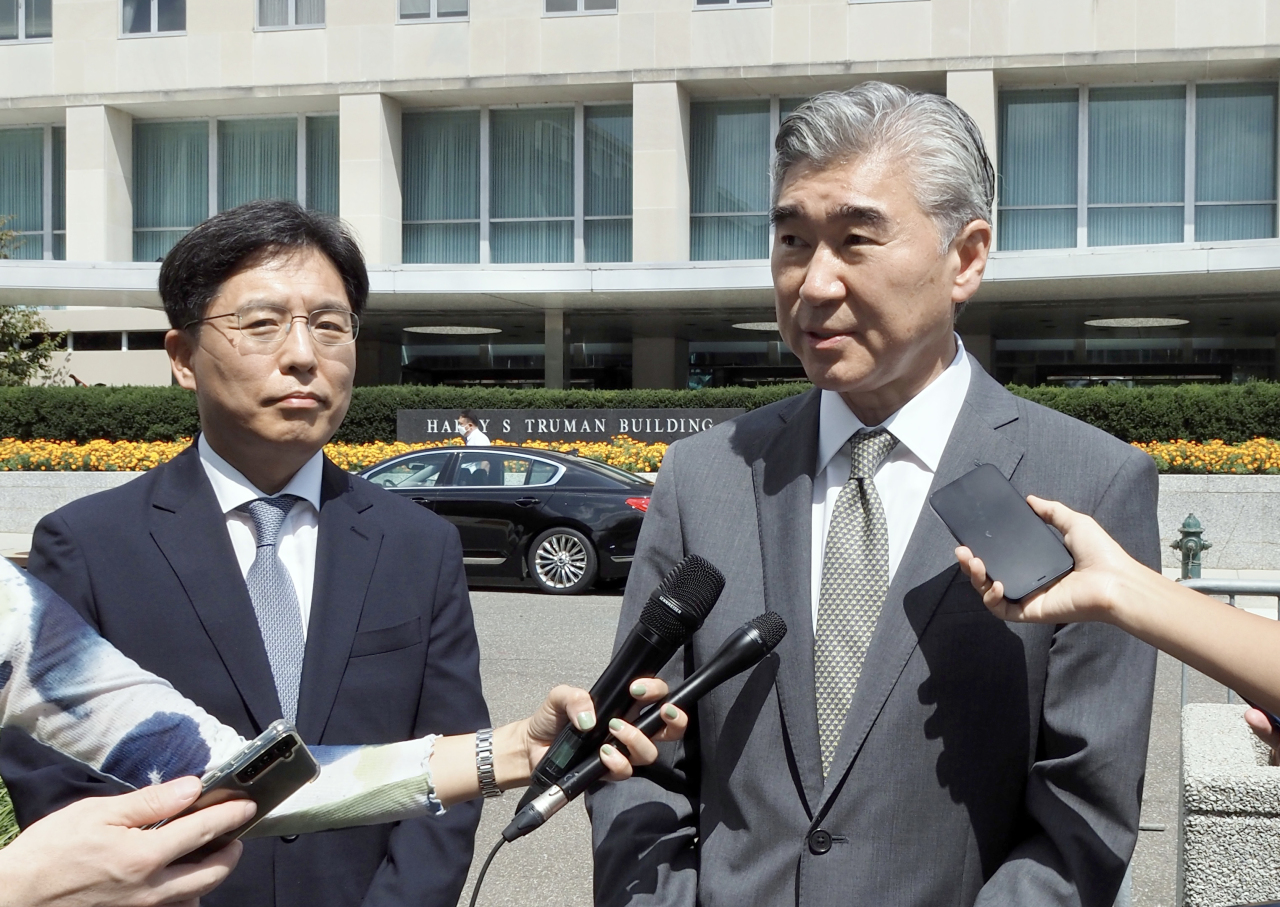 US special representative for North Korea, Sung Kim(right), speaks to the reporters in front of the building of the US State Department in Washington on Monday, after a meeting with visiting South Korean nuclear envoy Noh Kyu-duk (left) on Aug. 30. (Yonhap)

South Korea's top nuclear envoy, Noh Kyu-duk, will visit Tokyo next week for bilateral and trilateral talks with his U.S. and Japanese counterparts, the foreign ministry said Friday, as Seoul steps up diplomacy to resume dialogue with Pyongyang.

Noh and his US and Japanese counterparts, Sung Kim and Takehiro Funakoshi, respectively, plan to hold a trilateral meeting on Tuesday, as they strategize on reengaging with Pyongyang, amid concerns over signs of the reclusive regime restarting a plutonium-producing nuclear reactor.

Noh also plans to meet bilaterally with Funakoshi on Monday and Kim on Tuesday, a ministry official said.

"Through this round of consultations, South Korea, the United States and Japan are expected to discuss ways to cooperate to stably manage the Korean Peninsula situation and resume the peninsula peace process at an early date," the ministry said in a press release.

Noh, Kim and Funakoshi are expected to discuss humanitarian aid and other incentives to encourage the North's return to dialogue, as the country struggles with economic and other hardships exacerbated by pandemic-driven border closures.

They held their last three-way meeting in Seoul in June. Noh and Kim also held talks in Seoul and Washington last month -- in an indication of beefed-up cooperation over the North Korean issue.

During his last visit to Seoul, Kim stressed the U.S. does not hold hostile intent toward the North and renewed his offer to "meet with my North Korean counterparts anywhere, at anytime."

The recent report by the International Atomic Energy Agency (IAEA) on the North's apparent operation of the five megawatt nuclear reactor could be part of the agenda for the trilateral meeting.

The IAEA report said, since early July, there have been indications, including the discharge of cooling water, "consistent with the operation of the reactor." The North had obtained spent fuel rods from the reactor to extract plutonium, a fissile material used for a bomb.

Nuclear talks between Washington and Pyongyang have remained stalled since the Hanoi summit in 2019 between then U.S. President Donald Trump and North Korean leader Kim Jong-un ended without a deal. (Yonhap)