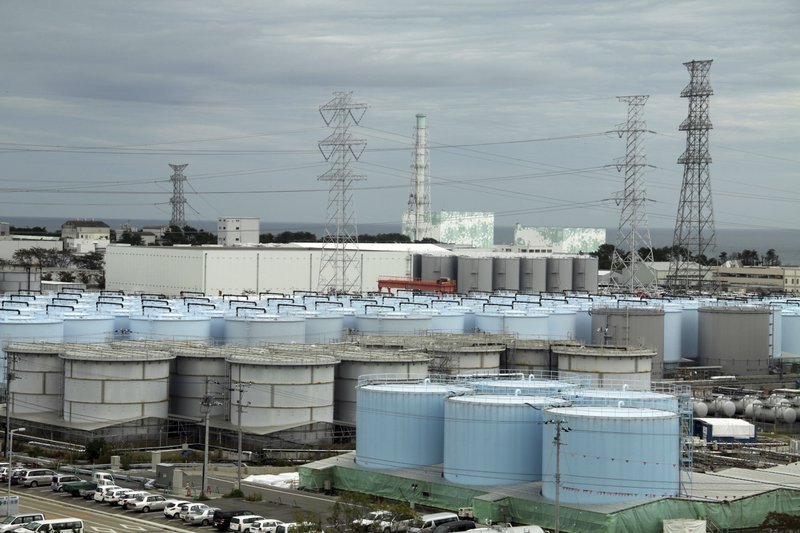 Storage tanks for treated contaminated water are seen at Fukushima Daiichi nuclear power plant in Okuma town, Fukushima prefecture. (AP-Yonhap)
The International Atomic Energy Agency will send a group of experts, possibly including some from South Korea and China, to the wrecked Fukushima nuclear power plant in December to monitor the safety and transparency of Japan’s planned disposal of treated radioactive water, an official from the agency said Thursday.

Fishers in Japan and neighboring countries, including China and Korea, reacted angrily to the Japanese government’s decision in April to dump the 1.25 million tons of wastewater it has collected since the Fukushima Dai-ichi nuclear plant was crippled by a 2011 earthquake and tsunami. The release is set to start in the spring of 2023, and the procedure is expected to take several decades.

In mind of the international community’s safety and transparency concerns, Japan requested the nuclear watchdog’s assistance to conduct reviews on the water treatment and discharge process, and to determine whether it meets safety standards.

An IAEA team led by Lydie Evrard, head of the agency’s department of nuclear security, is in Japan through Friday to meet with Japanese officials to discuss details about the monitoring process and also to visit the Fukushima site.

During a press conference in Japan, Evrad stressed that the IAEA is firmly committed to ensuring that the review is comprehensive and objective and that the results are conveyed to the international community.

She added that the IAEA will dispatch an 11-member multinational team of experts to Fukushima in December for the review, which may include experts from Korea and China.

The expert team will be asked to assess the water to be released and to evaluate the safety of the release process and the impact of its radiation on people and the environment, in accordance with IAEA safety standards.

She stressed that her team will listen to “different concerns from various stakeholders,” saying the main objective of the review is to be objective and transparent with a science-based approach.

The Japanese government and the plant’s operator, Tokyo Electric Power Company Holdings, decided to go ahead with the release in April after years of heated debate and despite protests from neighboring countries.

Japan said the decision was unavoidable, with storage space for the radioactive water expected to run out next summer.

It insists the wastewater will be filtered and diluted to remove all radioactive substances except tritium, which it says is harmless to humans in small doses.

The decision, however, was met with fierce backlash from neighbors including Korea, China and Russia, as well as from the Japanese fishing industry and environmental activists around the world. Opponents say the sheer volume of water to be released could affect human health, food safety and the maritime environment.

Last month, Korea expressed “strong regret” upon news reports that TEPCO planned to build an undersea tunnel to release the radioactive water from the power plant into the sea.

Koo Yoon-cheol, head of the Office of Government Policy Coordination, condemned Japan for unilaterally pursuing its plan without any prior consultations with Seoul or seeking its consent. He called on Japan to “immediately halt” the disposal plan and to communicate sufficiently beforehand with neighboring countries.