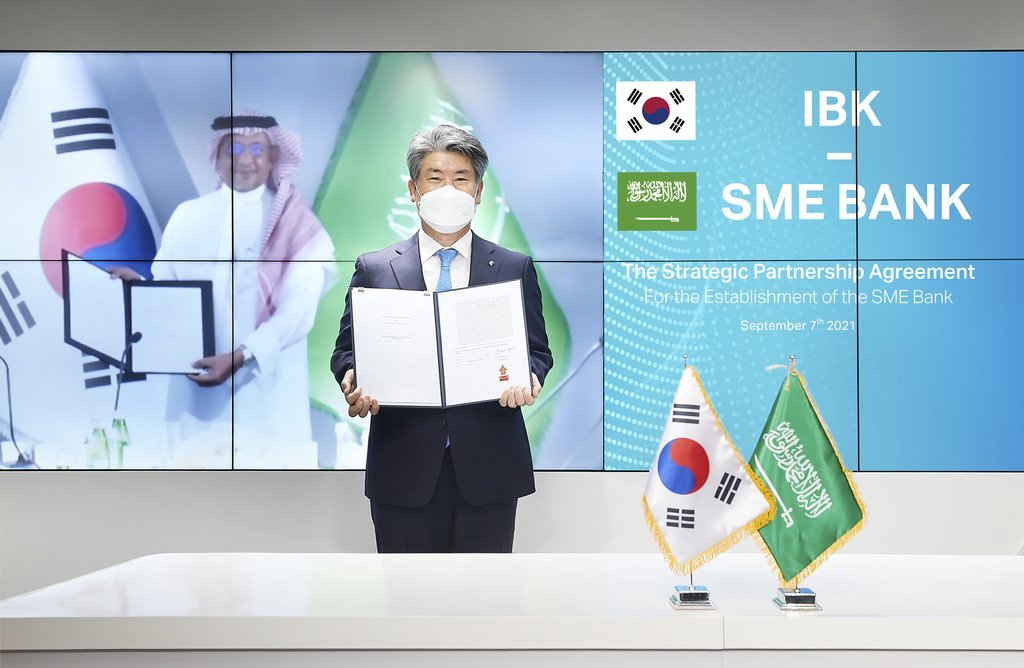 Industrial Bank of Korea CEO Yoon Jong-won and Saudi SME Bank Chairman Mohammad al-Tuwaijri pose for a photo Tuesday, in a videoconference held both in Seoul and Riyadh, Saudi Arabia. (IBK)
Industrial Bank of Korea said Wednesday it signed a memorandum of understanding with Saudi Small and Medium Sized Bank through a videoconference, in a bid to share IBK’s knowledge and expertise in financial support for small companies.

Under the agreement, IBK will help Saudi SME Bank in developing a credit loan system and products, business strategies, risk management measures and IT and computer systems.

IBK will also form a taskforce with working-level staff to directly communicate and cooperate with Saudi SME Bank. The bank plans to dispatch staff to Saudi Arabia if necessary.

“IBK will pass on its know-how in small business financing and hope to maintain a close partnership with Saudi Arabia in the future as well,” said Yoon Jong-won, CEO of IBK.

Before pledging support for Saudi SME bank, IBK signed an agreement in 2019 with the country’s Small and Medium Business Administration to come up with ways to give assistance to the country’s small enterprises.

This is in line with South Korea and Saudi Arabia’s commitment for strengthening its cooperative partnership. The two governments jointly established the Korea-Saudi Vision 2030 Committee, a channel built in 2017 to share South Korea’s development process with Saudi Arabia.

Meanwhile, IBK has been assisting small business financing in developing countries since 2009. It is currently operating local affiliates in China, Indonesia and Myanmar, and 59 business branches over 12 countries.