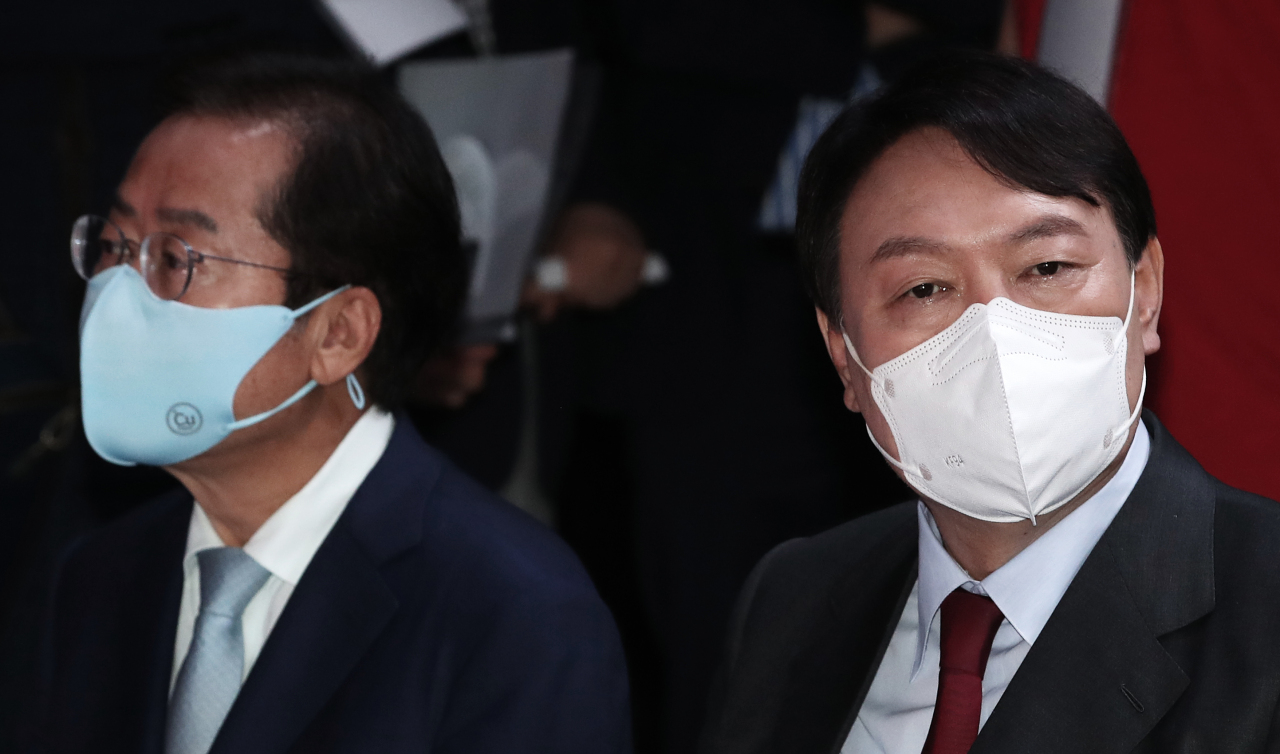 Speculation has swirled around him for a week after online news outlet Newsverse reported on Sept. 2 that Yoon ordered Rep. Kim Woong of the main opposition People Power Party to file a complaint with the prosecution against politicians and journalists linked to the ruling Democratic Party of Korea ahead of last year’s general elections.

In a press briefing Wednesday afternoon, Yoon said, “I stood in front of you today because I thought it is pathetic that an election is held every time with this kind of maneuver and instigation.”

Regarding the news reports that the informant -- who gave information to Newsverse -- was converted to the status of a whistleblower, Yoon said, “The informant should not hide, but come out and identify the source.”

He said, “The suspicion (surrounding him) should go through normal procedures. If not, it is public fraud.”

Yoon called on the National Assembly to summon him, saying, “I will actively participate in the fact-finding process, including parliamentary audits.”

A few hours earlier, Rep. Kim, who was alleged to have submitted the complaint, also denied the allegations and promised to take legal action.

In a press conference, Kim said the complaint had not been written by him.

“There are forces spreading rumors that I participated in political maneuvering, which is a clear spread of false information,” he said. “I will take stern legal action.”

As speculations mounted, the Corruption Investigation Office for High-ranking Officials summoned a civic group head who accused Yoon for abusing authority and leaking official secrets. The anti-corruption investigation agency investigated Kim Han-mae, who reported Yoon and other prosecutors to the agency two days prior.

“The investigation was conducted as part of the basic investigation” for the alleged political scandal, said an official of the agency. “We will decide whether to investigate (Yoon) directly based on the details of the accuser‘s investigation.”

Ruling Democratic Party Floor Leader Yun Ho-jung called on the anti-corruption agency to initiate a quick investigation to reveal the truth. He also called for swifter progress on prosecution reform.

Kang Byung-won, a supreme council member of the Democratic Party, compared the accusation to a nuclear bomb, adding Yoon should be brought to the parliamentary audit to clarify the issue.

Whether the scandal is true or not, it is likely to affect Yoon’s approval rating. Over the past week, another presidential hopeful, Rep. Hong Joon-pyo, who is a strong contender in the opposition bloc, has seen a steep rise in popularity.

According to a recent poll, Gyeonggi Province Gov. Lee Jae-myung, a candidate from the ruling bloc, had 28 percent support and Yoon stood at 26.4 percent. The survey consulted 1,003 people nationwide and was released by the Korea Society Opinion Institute on Monday.