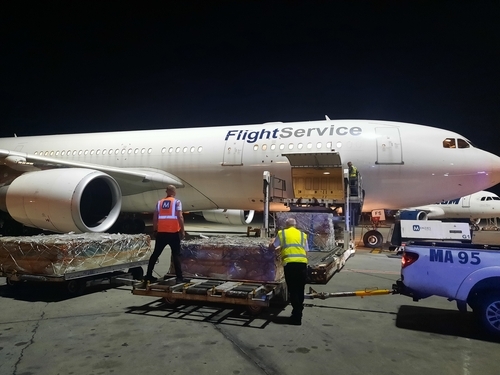 Officials at an airport in Romania load boxes of COVID-19 vaccines on a plane bound for South Korea, in this photo provided by the South's Embassy in Bucharest, on Tuesday. It is the second batch of the vaccine supplies from the east European country under a swap deal to exchange the vaccines with other medical supplies from Seoul. (South's Embassy in Bucharest)
The second batch of coronavirus vaccines South Korea plans to bring in from Romania under a swap deal has departed for Seoul, according to the Korean embassy in Bucharest on Wednesday.

A transport plane carrying 976,500 doses of Pfizer and Moderna vaccines took off from the eastern European country Tuesday night (Romania time), the embassy said. It is expected to land at Incheon International Airport, west of Seoul, at around 3 p.m.

This is the second batch of some 1.5 million COVID-19 vaccines in total Romania has agreed to provide South Korea in exchange for vaccines and other medical supplies from Seoul. The first batch arrived in Korea last Thursday.

South Korea has been striving to raise the vaccination rate amid vaccine shortages as the pandemic continues to rage across the country. Health authorities said the additional supplies will help meet the goal of reaching 70 percent national inoculation rate before the fall harvest Chuseok holiday, set for Sept. 20-22.

A total of 30.7 million people, or about 60 percent of the nation's 52 million population, have received at least the first shot of COVID-19 vaccines as of Tuesday, according to the Korea Disease Control and Prevention Agency. (Yonhap)