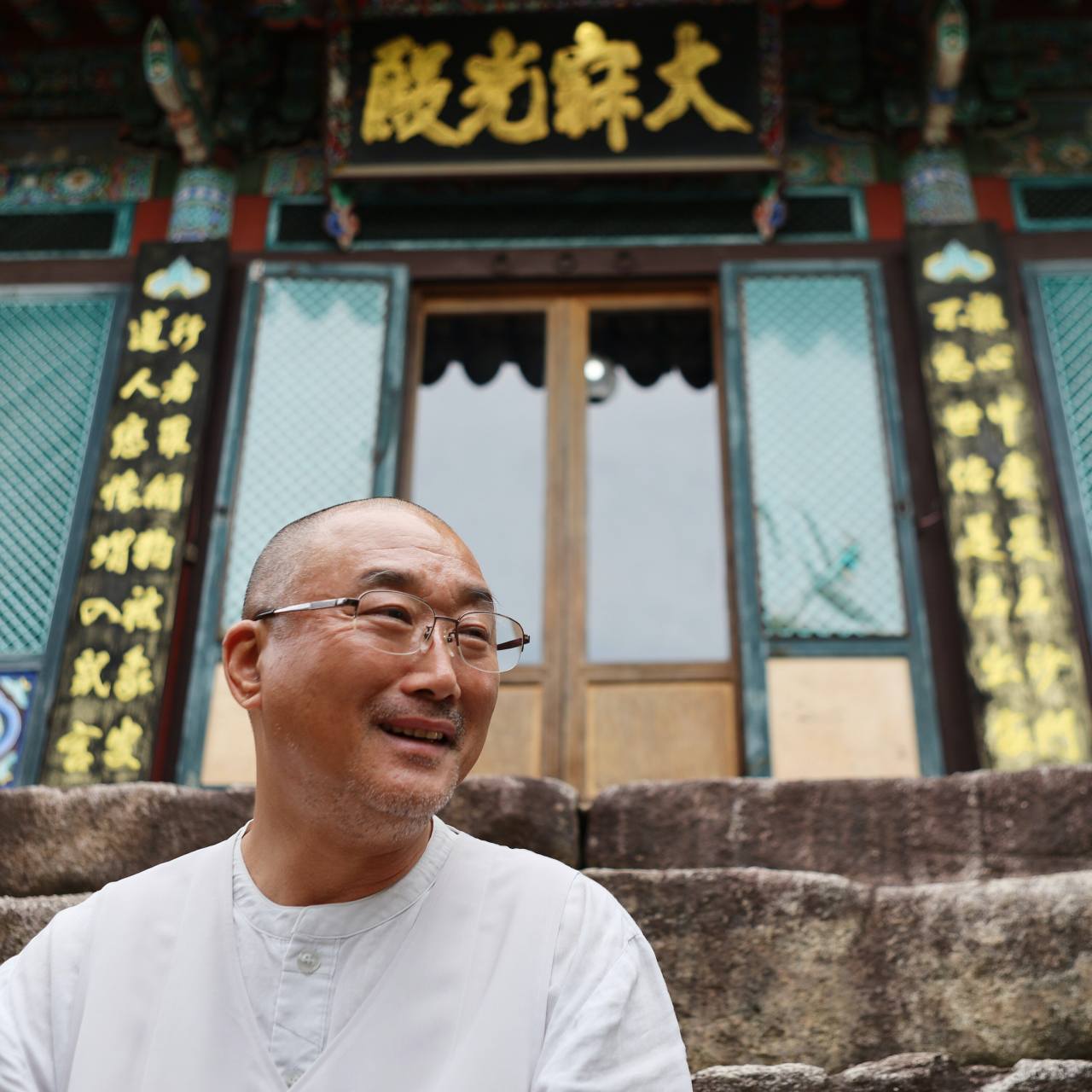 Ven. Jibong, the founder of Yeongcheon History Museum, speaks about Minganinswaejobo, the world’s first commercial newspaper, at Yonghwasa temple in Yeongcheon, North Gyeongsang Province.Photo © 2020 Hyungwon Kang
The power of the media is in its right and capacity for selective truth telling.

King Seonjo, the 14th king of the Joseon Kingdom, clearly understood that “newspapers write the first draft of history,” during what was to be the world’s first case of press oppression in 1577.

“The first commercial newspaper printed with movable types was in Korea during the years of King Seonjo,” said the Ven. Jibong of the Yeongcheon History Museum.

Following three months of the historic printing of the world’s first commercial newspaper in 1577, 30 entrepreneurs and their families mysteriously vanished from Seoul.

The Joseon Wangjo Sillok, or the Veritable Records of the Joseon Dynasty, which is the most detailed historical record of any kingdom in the world, listed on UNESCO’s Memory of the World registry, recorded the historic feat by a group of entrepreneurs and their subsequent torture, followed by their disappearance in 1577. 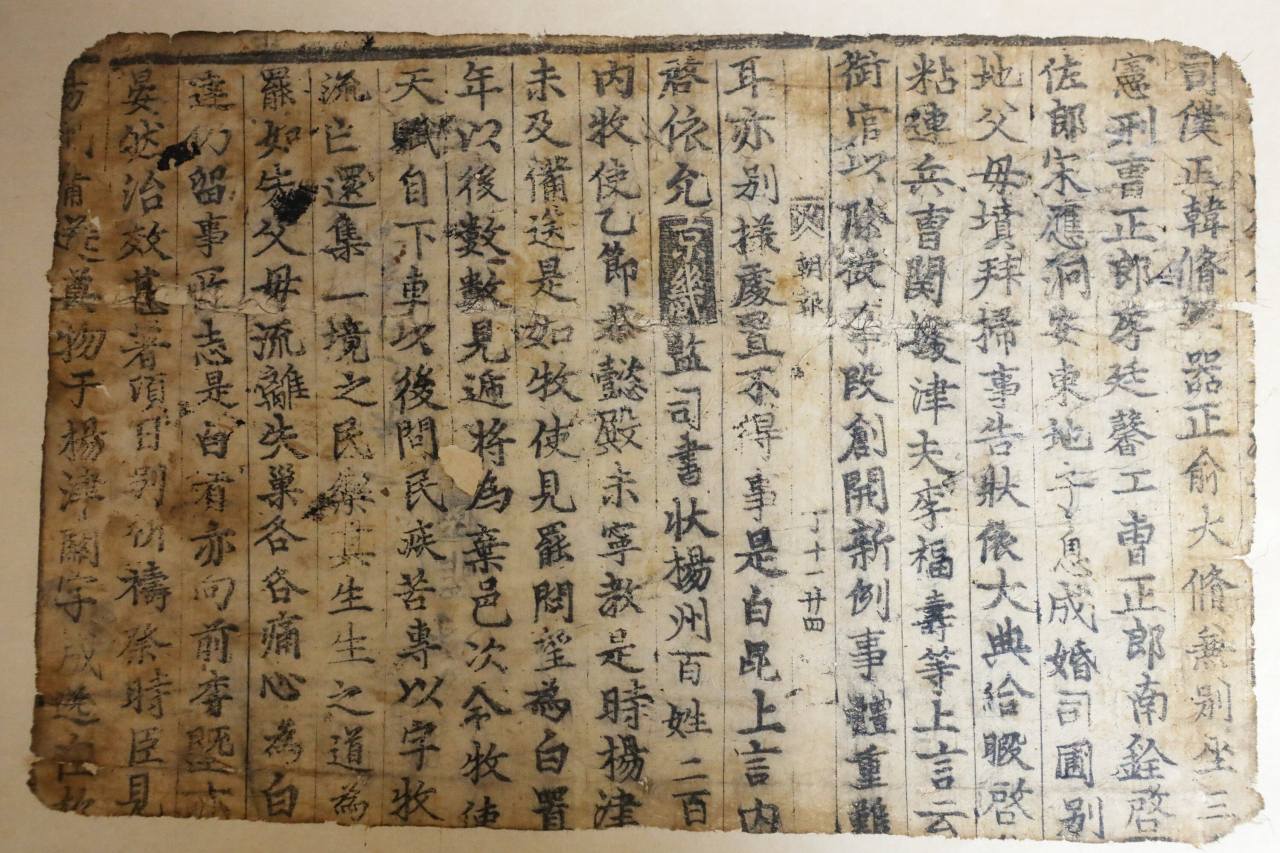 The Nov. 24, 1577, edition of the Minganinswaejobo, the world’s first daily commercial newspaper printed with movable types, shows the use of both metal and wooden types. The wooden types print bolder while metal types print with finer lines.Photo © 2020 Hyungwon Kang
King Seonjo is at the center of one of the most humiliating chapters in Korean history. In 1592, people set fire to the King’s palace and royal documents when King Seonjo abandoned his people and fled the capital city following the Japanese invasion.

Because of that incident, records of King Seonjo are thinner than those of other kings, and are supplemented with contemporaneous notes, called Sukdam diary. It contains interactions with the king by Yi Yeul-gok, one of the two most prominent scholars of all of Joseon period, who taught kings.

The Joseon Kingdom released a daily handwritten government communique, called Jobo, which included vast information about the palace, and governmental personnel appointments for the entire country.

Representatives from regional areas posted in the capital city would hand-copy information relevant to their respective regions, allowing the news from the capital to be delivered to far corners of the land within days. It would be read by a select few educated scholars and officials who needed to stay informed of the kingdom’s affairs.

Because the handwritten Jobo was written in extreme cursive, intended only for the esoteric and select few readers, it did not serve the wider public.

Even though Korea had already invented movable metal type printing during the Goryeo Kingdom (918-1392), the printing technology was the exclusive domain of the government and of Buddhist temples.

In 1577, a group of entrepreneurs, who had received official permission, started printing a daily newspaper summarizing the vast amount of communique from the government and translating the difficult cursive into a legible format.

“The printed newspaper was quite popular among the government officials and noblemen,” wrote Yi in the Sukdam diary.

It was about two months after that King Seonjo got wind of the news.

King Seonjo, who was sensitive to his less-than-perfect royal lineage, was enraged to learn that in addition to his government’s handwritten daily communique, private newspapers were being printed, featuring news from the palace, including about the health of Queen Inseong, also known as Queen Dowager Gongui, the widow of King Injong, the 12th King of Joseon and King Seonjo’s uncle.

“Is it not the same as setting up another National Archive Bureau when people are selectively printing the news?” King Seonjo was quoted as saying in the records.

King Seonjo ordered the metal and wooden types carved by the entrepreneurs for printing the newspaper to be confiscated.

He had all the involved parties imprisoned and suspects tortured to get to the bottom of who organized the so-called crime.

Since the rise of modern newspapers in the 19th century, historians have been searching for physical evidence of the first commercially and privately printed newspaper with movable type, but for centuries it was never located, until the 21st century.

Ven. Jibong, the director of Yeongcheon History Museum, is an art historian who identified the printed newspaper from 1577 when it appeared on an internet auction site trading in rare books. 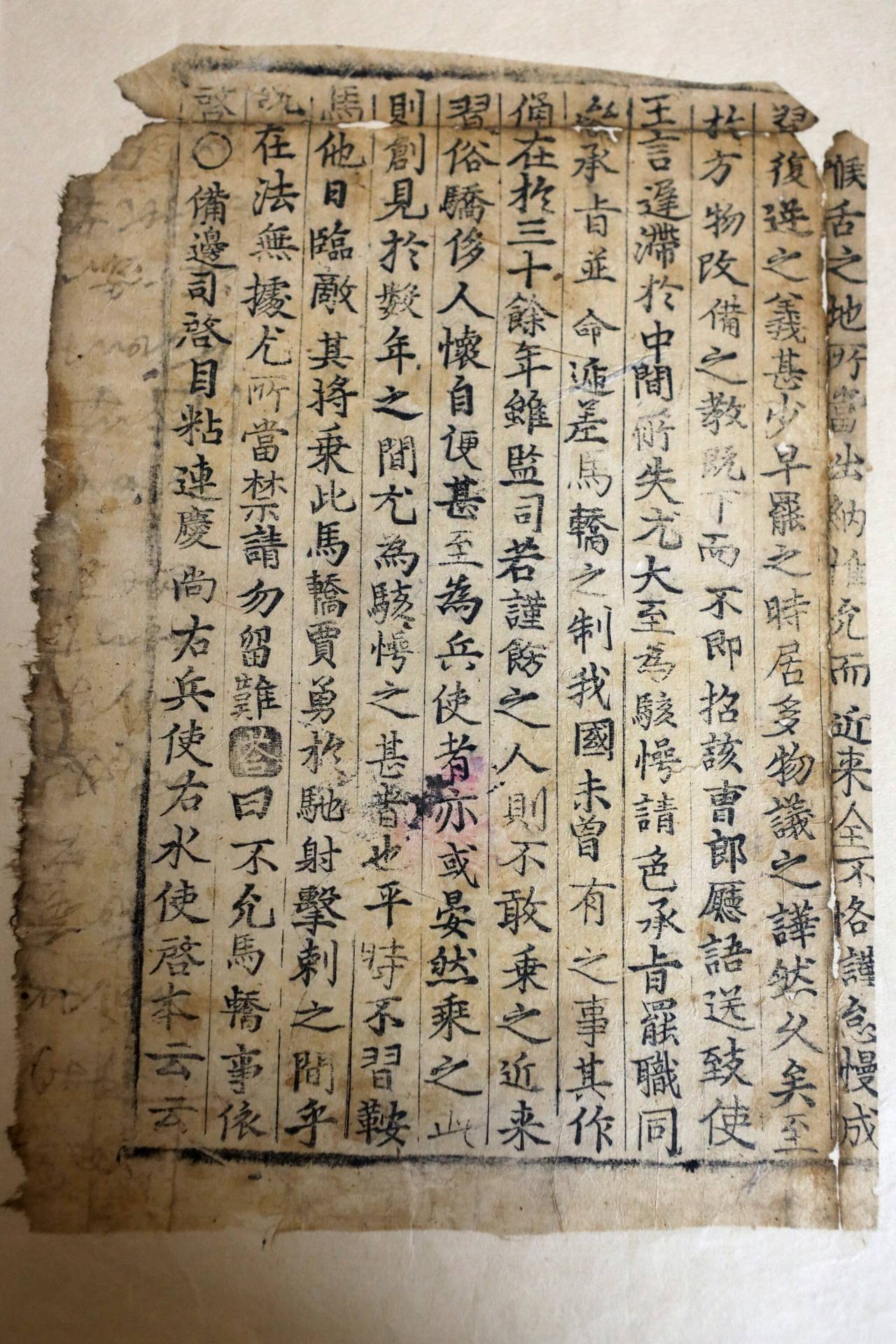 The November 1577, newspaper, which is the world’s first daily commercial newspaper printed with movable types, shows several variations of the Hanja character horse (馬) in varying sizes and style. Photo © 2020 Hyungwon Kang
The 1577 newspaper was hidden inside an old book cover, which was during ancient times often made out of recycled Hanji paper -- an even more precious commodity then.

The newspaper clipping had references to Queen Inseong, the widow of King Injong.

Ven. Jibong knew about the queen through a painting that was commissioned and installed at the Dogapsa Buddhist temple in South Jeolla Province. The 1550 painting, which was commissioned in King Injong’s honor by his widow, has since been stolen, and is now being kept at a temple in Kyoto, Japan.

The Placenta Chamber of King Injong, whose reign lasted only eight months and seven days, the shortest of all Joseon kings, was the other clue that led to the missing newspaper from 1577. 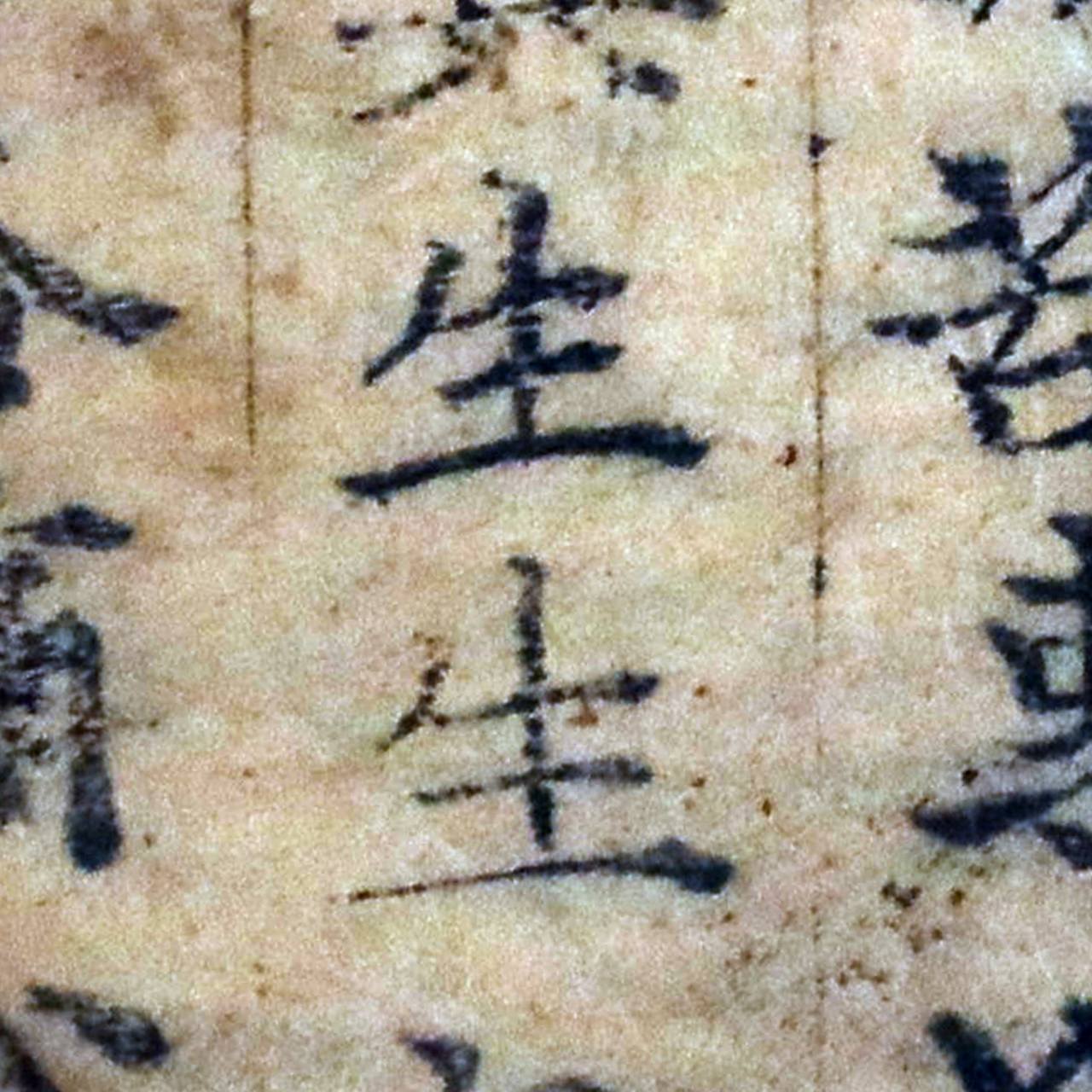 Two Hanja characters sang (生) are printed with movable wood type (top) and metal type (bottom) in this close-up image of the Nov. 24, 1577, publication of the world’s first daily commercial newspaper.Photo © 2020 Hyungwon Kang
Ven. Jibong knew about the owner of the chamber which is located in the mountains behind the Eunhaesa Buddhist temple where Ven. Jibong used to serve.

The private newspaper that ran an article documenting Queen Inseong’s health must have troubled King Seonjo. One day before her death, he asked for everyone to pray for the Queen, granted pardon to King Injong’s uncle, and asked his ministers not to make any issue of the granting of the pardon in the future.

King Injong’s uncle was killed by a brother of infamous Queen Munjeong, stepmother of King Injong. She was suspected of murdering King Injong and ruled the kingdom as the regent for her son, King Myeongjong, who succeeded King Injong, at age 12, as the 13th King of Joseon. 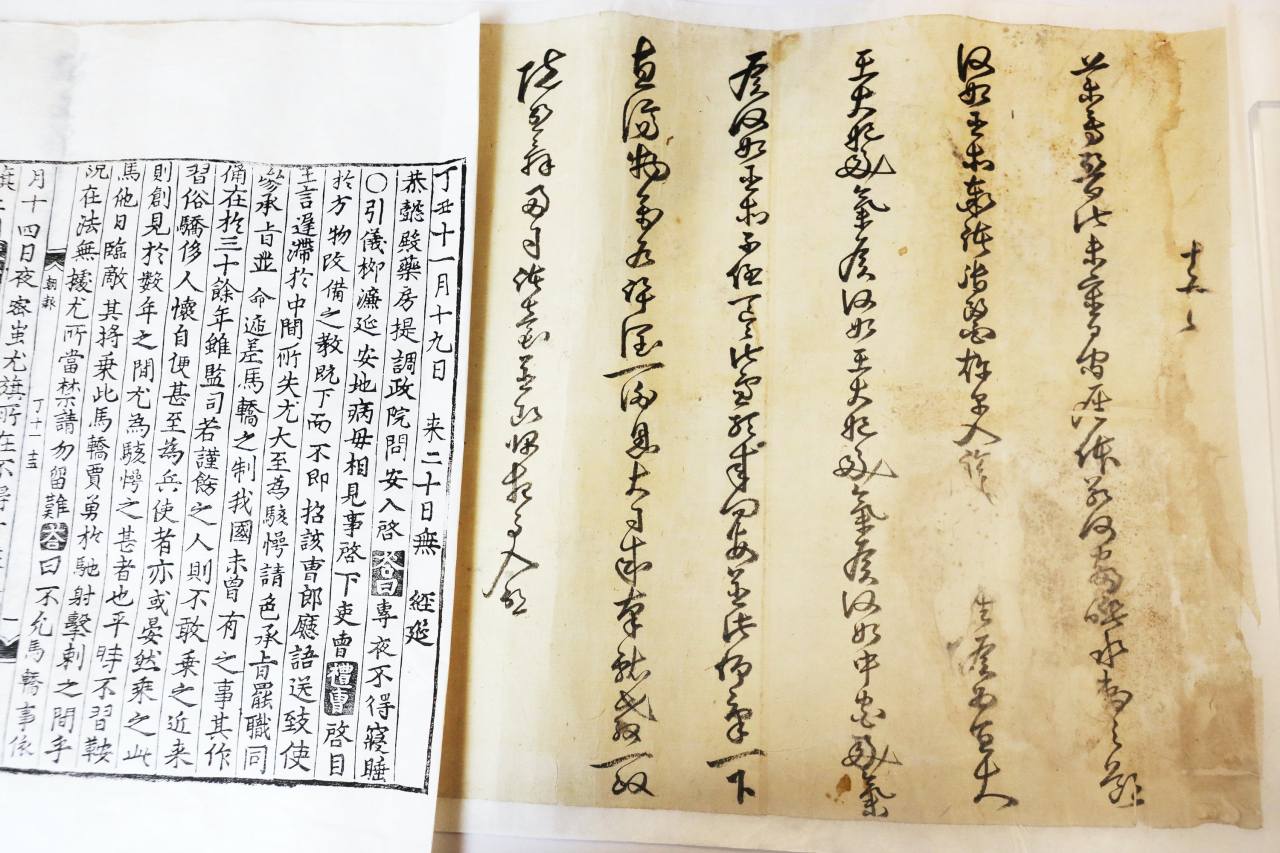 Joseon-period handwritten government issued communique (right) and the world’s first daily commercial newspaper printed with movable types, the Minganinswaejobo, are on display side by side in Yeongcheon, North Gyeongsang Province.Photo © 2020 Hyungwon Kang
The world’s first private-led movable type printing of a newspaper met all the definitions of a modern daily newspaper -- its private production, commercial business operations and their own movable types, daily publication, and editorial independence, followed by a violent shutdown by the king with absolute power over the kingdom.