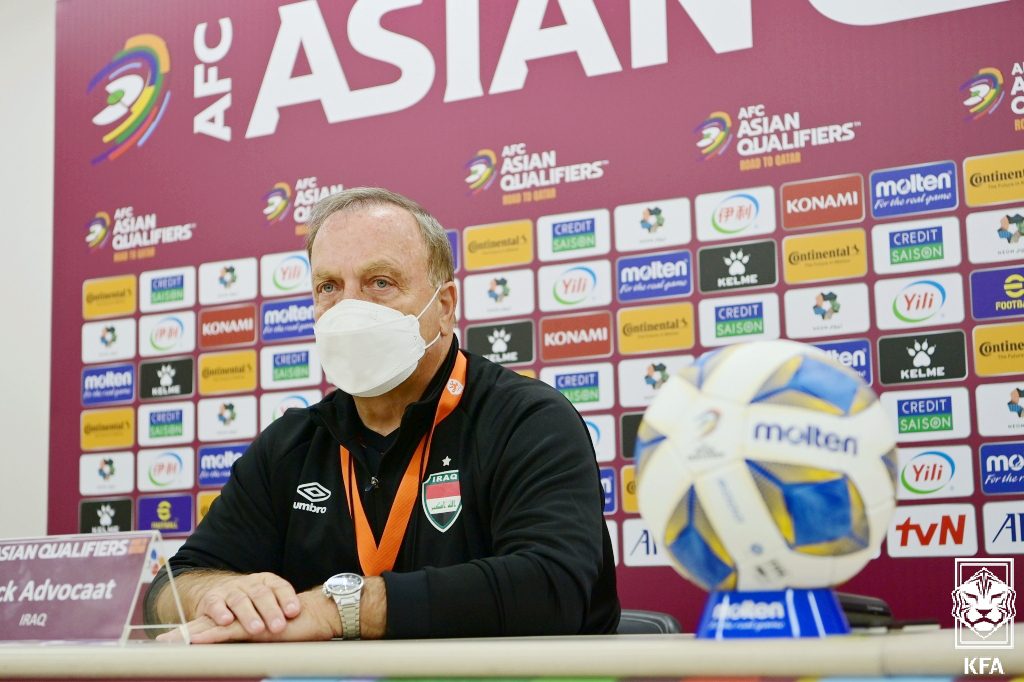 Dick Advocaat speaks at a prematch press conference at the Seoul World Cup Stadium on Wednesday. (Yonhap)
It has been 15 years since Dick Advocaat last coached the South Korean men's national football team. And the 73-year-old Dutchman finds himself on his old stomping grounds this month, not to have any reunion with old pals, but to prepare for a battle against his former team with a World Cup berth at stake.

Advocaat will make his Iraq coaching debut at 8 p.m. Thursday against South Korea in the third round of the Asian qualifying for the 2022 FIFA World Cup. It will be the first Group A matches for both teams.

Advocaat became Iraq's new head coach at the end of July, with a task of taking the team to the World Cup for the first time since 1986.

At his prematch press conference at the Seoul World Cup Stadium on Wednesday, Advocaat admitted it will be "a big challenge" to get the 70th-ranked Iraq into the World Cup. But he said he was also pleased with what he saw during training camp, which began in Spain on Aug. 9 and made a stop in Turkey later in the month.

Advocaat also reminisced about South Korea, saying, "It's a privilege to be back in the beautiful country. I have great memories."

On Advocaat's watch at the 2006 World Cup in Germany, South Korea beat Togo 2-1 to open Group G play. It was South Korea's first victory at a World Cup held away from home. But they had a draw and a loss over their next two matches to miss out on the knockouts, and Advocaat stepped down after the tournament.

He has since managed national teams of Belgium, Russia and Serbia, and also helmed a handful of clubs across Europe. He has also kept tabs on the state of South Korean football and said, "I think football in Korea has developed very much. We've seen the last couple of years that they have a great team."

But the coach insisted Iraq won't back down against anyone.

"They're the favorite in this group because of the quality of individuals on the team," Advocaat said of South Korea. "But we have good feelings about our squad as well and we'll give them a very difficult time tomorrow." (Yonhap)