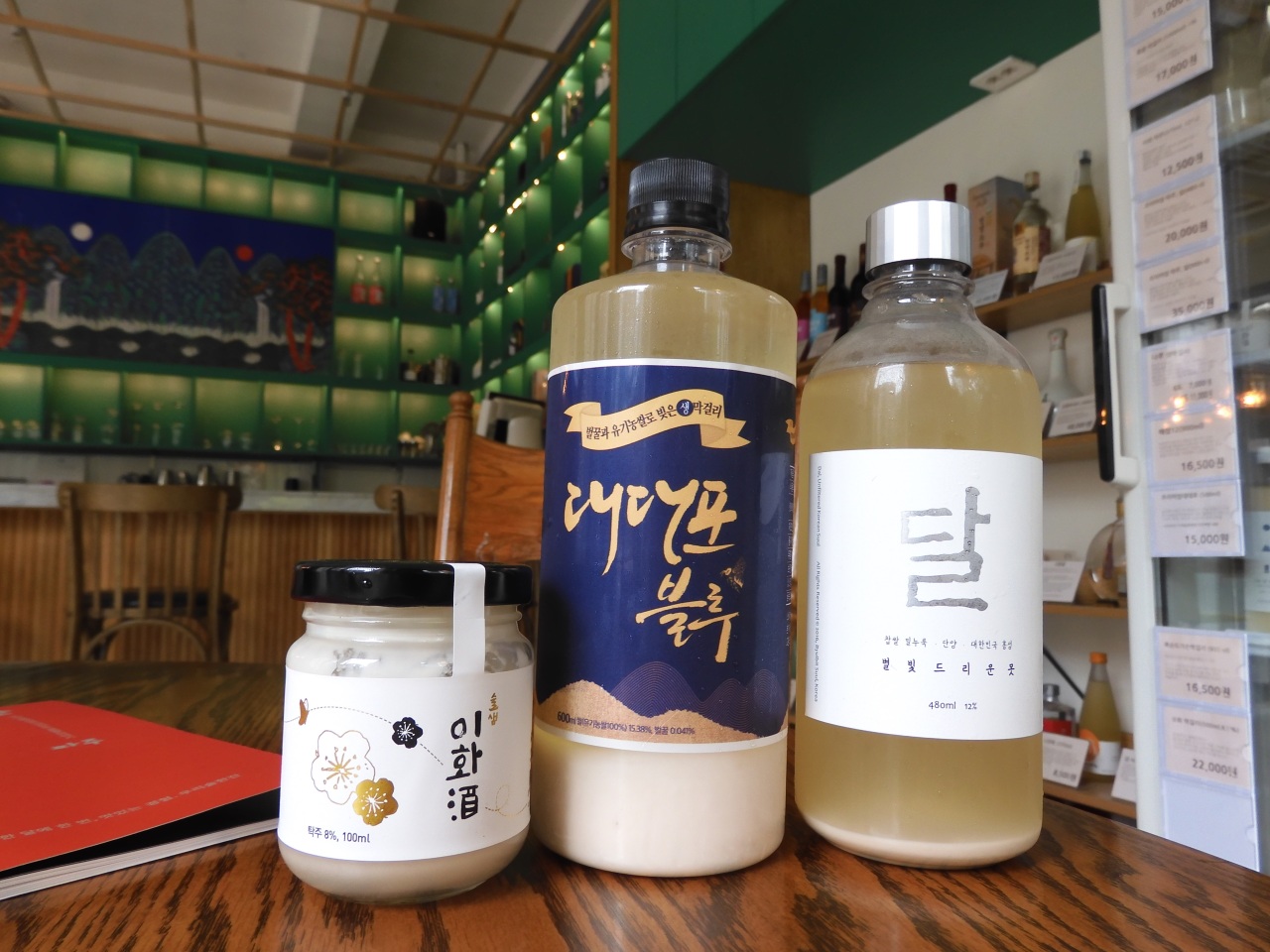 Three regional liquor varieties recommended for novice drinkers by OneshotKorea (Kim Hae-yeon/ The Korea Herald)
Among the commonly held preconceptions about Korea’s drinking culture and manners, one that tops the list is the practice of “pour-and-drink,” referring to Korean’s heavy and fast-paced style of imbibing alcohol.

To challenge the stereotype, OneshotKorea, located near Cheonggyecheon, central Seoul, serves traditional Korean liquor, while also introducing the history of the region each drink hails from and the distinctive brewing processes involved. The belief that “drinking right” mattered more than “drinking a lot” in the old days, as is reflected in literature and writings from yore, led to the creation of the brand, called Urisulhanjan in Korean.

OneshotKorea was founded in 2020 as a local liquor consulting company promoting and selling traditional liquor brewed in different regions of the country with ingredients grown in the area.

“Before starting this company, I worked at a public relations firm, which involved heavy drinking with clients on a daily basis.” OneshotKorea CEO Kim Eun-kyoung, 45, said in an interview with The Korea Herald on Aug. 13. “I enjoyed the gatherings, but drinking somaek (mix of soju and beer) would give me a headache the next morning.”

Kim explained how she came across traditional liquor one day during a business meeting, and was surprised to wake up the next morning without a hangover. “There’s significantly less or no synthetic ingredients and preservatives in local liquor that I’ve experienced, compared to other widely available alcoholic beverages.”

Some 1,227 breweries exist in Korea, according to a 2019 report from the Ministry of Food and Drug Safety. When soju and beer breweries are removed from that count, the number of local breweries is estimated at around 1,200.

Kim, who visits an average of four breweries per month, said that traditional Korean liquor breweries are expanding in number and size. “There was a time when drinking makgeolli and other traditional liquors were considered the furthest thing from cool. However, local liquor is slowly on the rise, making its presence known with bottles dressed up in trendy designs,” said Kim.

She recalled how people in their mid-20s to 30s would casually show up at the store in the evenings after work, and try the latest local liquor or cocktails, rather than a night out with a bottle of fancy wine. Another notable change is that the consumers want to hear the stories behind their drinks.

In 2013, the Ministry of Agriculture, Food and Rural Affairs launched a project called “visiting breweries” as part of efforts to promote the sustainability of regional liquor industries. Forty-six breweries have been designated under the program, and each offers tours to visitors.

“I got goosebumps each time a brewery owner told me the long and rich history of the local liquor of the region, and how they tried to keep up to the name by using fresh ingredients from the area,” said Kim. The more she delved into the history of regional liquors, the more keenly she felt a sense of duty about her work. 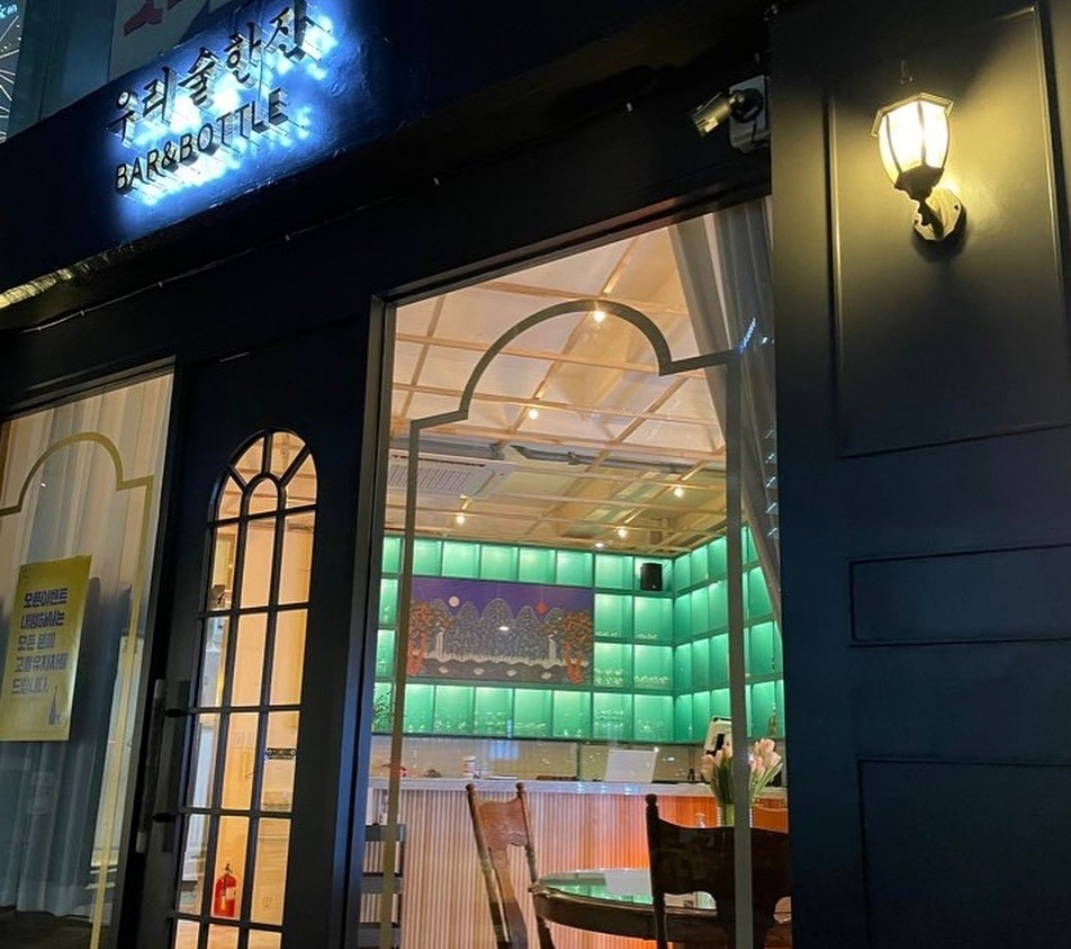 OneshotKorea (Urisulhanjan), located in Jongno-gu, central Seoul (OneshotKorea)
Before the Liquor Tax Law was formally adopted in 1916 during Japanese colonial rule, Korea was a country where home-brewed liquor culture was pervasive. Within only 30 years, the law had snuffed out Korea’s domestic liquor culture that had existed for thousands of years.

“Under the pretext of ‘protecting’ Korean culture while collecting taxes, the Japanese implemented license systems for home brews. By 1932, only one home brewery remained from the 375,757 places in 1918.” Kim said. 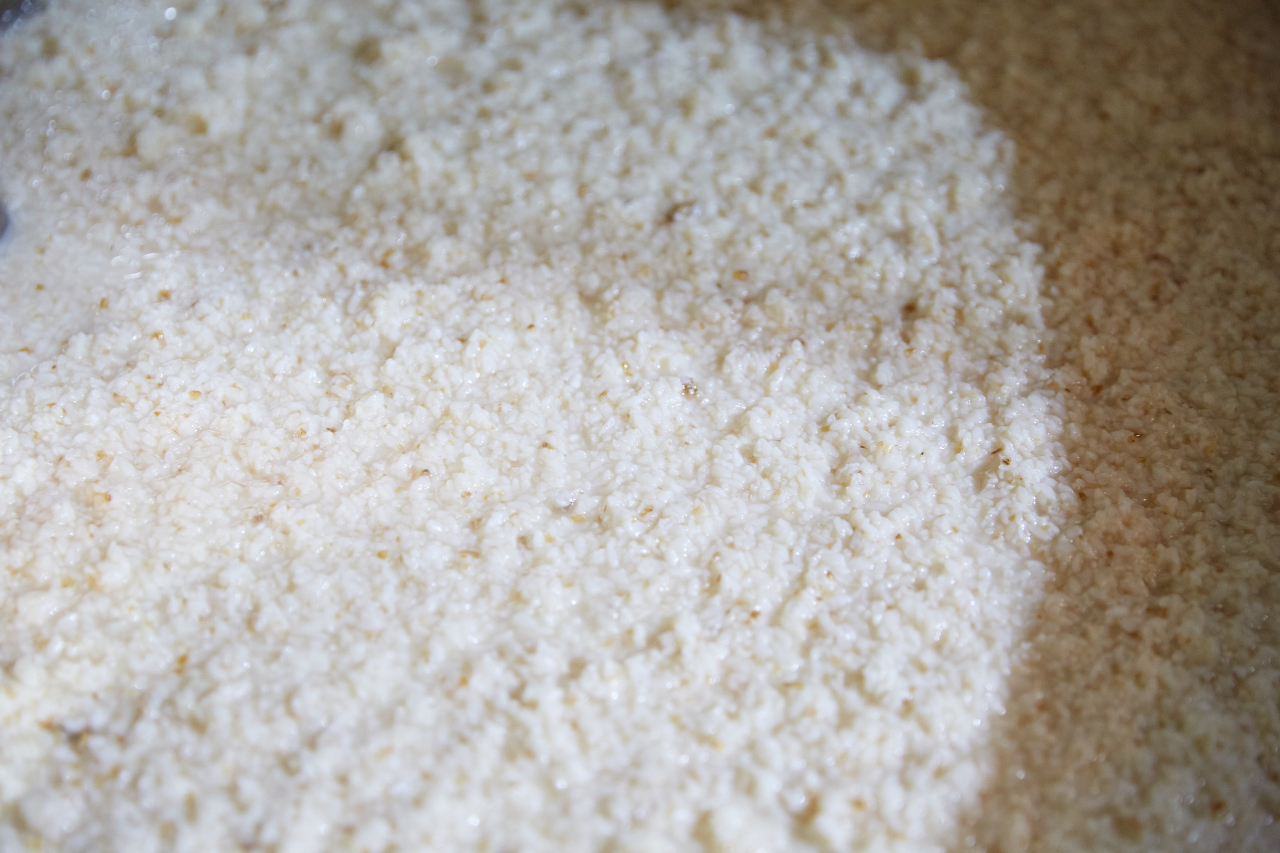 Rice undergoing the fermentation process at a local brewery (OneshotKorea)
Kim keeps a record of the history that had once been on the verge of being lost, as well as distinctive regional ingredients, ranging from medicinal herbs to flower petals. At the end of each month, a booklet is made centered around a selected liquor and delivered to clients on a subscription basis.

“I’ve been on local brewery tours in Belgium, France, and the Netherlands. They all have distinctive brewing styles and complex processes passed down generations in their own regions. Likewise, different know-hows and rice fermentation processes exist for each brewery in Korea as well.” 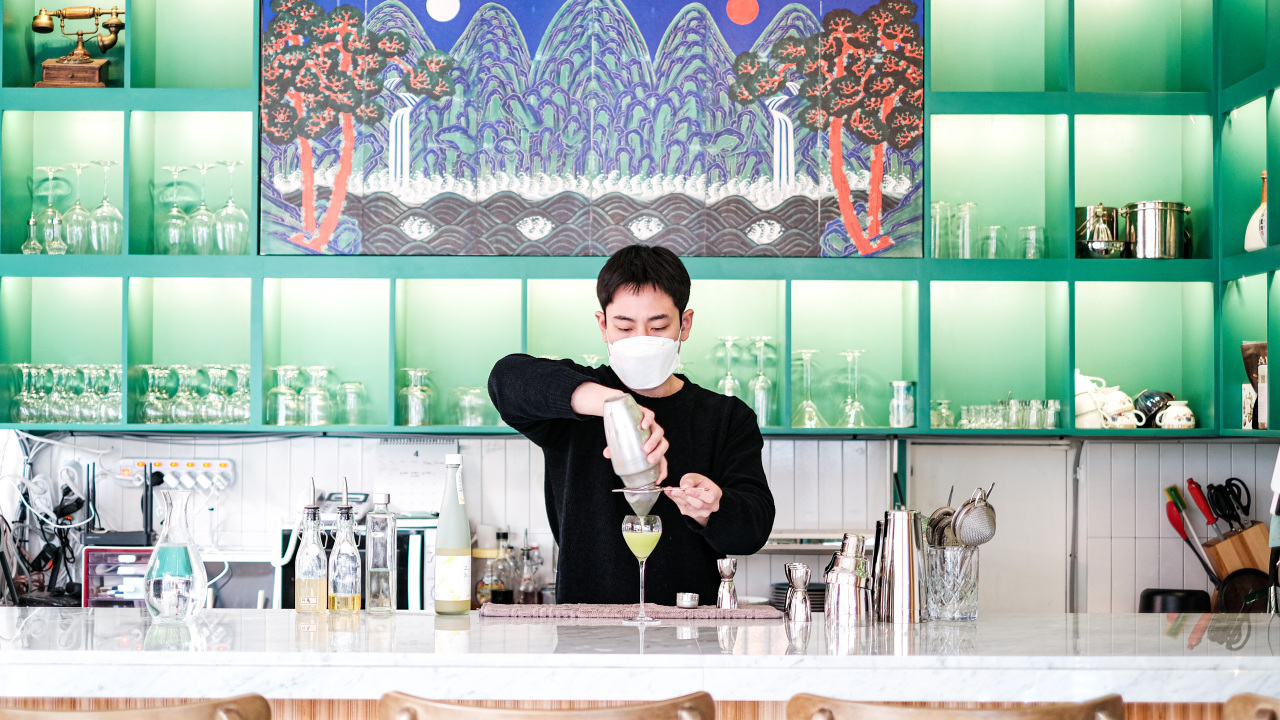 A bartender presents traditional regional liquor-based cocktail (OneshotKorea)
“Ehwaju’s yogurt-type liquor has a very thick and creamy texture. The natural flavor of sweet and sour ripe pears makes it suitable not just during meals, but before and after as an appetizer or dessert.”

Kim’s goal is to play a bridging role between regional breweries and consumers, ultimately becoming a game changer in the industry. “I love traveling abroad, so I’ve always envied foreign friends offering me their own wine or beer with interesting stories to tell. When the pandemic era ends, I hope a day will come when Koreans can proudly offer local liquor to global friends.”