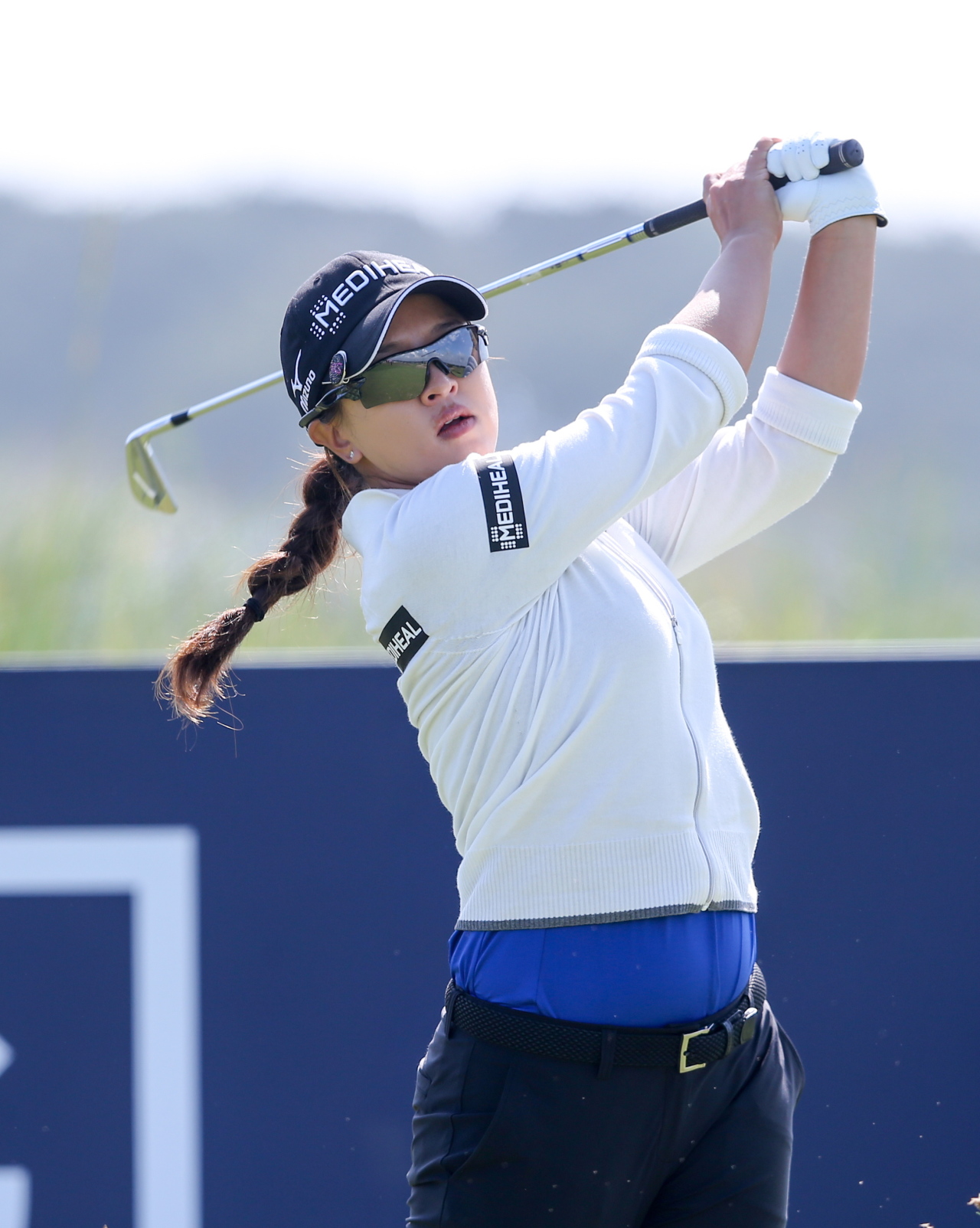 In this EPA photo, Kim Sei-young of South Korea hits a shot during the final round of the AIG Women's Open at Carnoustie Golf Links in Carnoustie, Scotland, on Sunday. (EPA-Yonhap)
File this under "something you don't see very often in sports."

South Korean golfers have been shut out at LPGA majors this year, the first time that's happened since 2010.

Kim Sei-young ended the AIG Women's Open at Carnoustie Golf Links in Scotland in a tie for 13th on Sunday (local time). She was tied for eighth after 54 holes at six-under par but finished her tournament at the same score after an up-and-down 72 in the final round.

The country has been a dominant force in women's golf for years, but its LPGA golfers haven't been winning titles with quite the same regularity in 2021.

Four different players won the season's first four majors prior to the AIG Women's Open at Carnoustie Golf Links in Scotland. The fifth major of the year started less than two weeks after the end of the Tokyo Olympics, and it was missing two of the Korean Olympians and top-10 players in world No. 2 Ko Jin-young and No. 7 Kim Hyo-joo.

That left world No. 3 Park In-bee, a seven-time major champion, as the highest-ranked Korean player in the field at Carnoustie. Kim Sei-young, ranked fourth, was chasing her second career major title.

Things looked promising after the first round, when Kim held a share of the lead after shooting a five-under 67.

Kim was the top South Korean at Carnoustie, but this meant no South Korean player ended inside the top 10 at a major for the first time since the 2003 Kraft Nabisco Championship (currently ANA Inspiration).

Kim rued wayward tee shots over the final two rounds, saying, "I made mistakes that I shouldn't have made."

After Kim, Kang Hae-ji was the next best South Korean at two-under 286, which put her in a four-way tie for 29th. She and Kim were the only two Koreans to finish the Women's Open with an under-par score.

Park, who tied for seventh when Carnoustie previously hosted the Women's Open in 2011, had a tournament she'd rather forget.

Among South Koreans, Lee Jeong-eun, former LPGA Rookie of the Year, came the closest to winning a major this season at the Amundi Evian Championship in France last month.

Lee Jeong-eun took a five-stroke lead into the final round, but Minjee Lee of Australia stormed back from seven shots behind to tie Lee at 18-under 266 after 72 holes. She then beat the South Korean at the first hole of the sudden-death playoff.

Put aside struggles at majors for a moment: South Korean players have underachieved for the whole season.

Only three players -- Ko, Park and Kim Hyo-joo -- have won a tournament this year. That's three wins out of 22 tournaments.

In the 2020 season cut short by the COVID-19 pandemic, South Koreans combined to win seven out of 18 events, including three of the four majors after the Evian Championship was canceled.

Amid South Koreans' struggles, Nelly Korda of the United States has stepped up as the player to beat in 2021. She has won three titles by herself, including her first career major at the KPMG Women's PGA Championship in June. She replaced Ko as the No. 1 player in that same month and then captured the Olympic gold medal in Japan to boot.

There are nine tournaments left in 2021 for South Korean players to salvage something, including an autumn Asian swing with a stop in South Korea in October. (Yonhap)