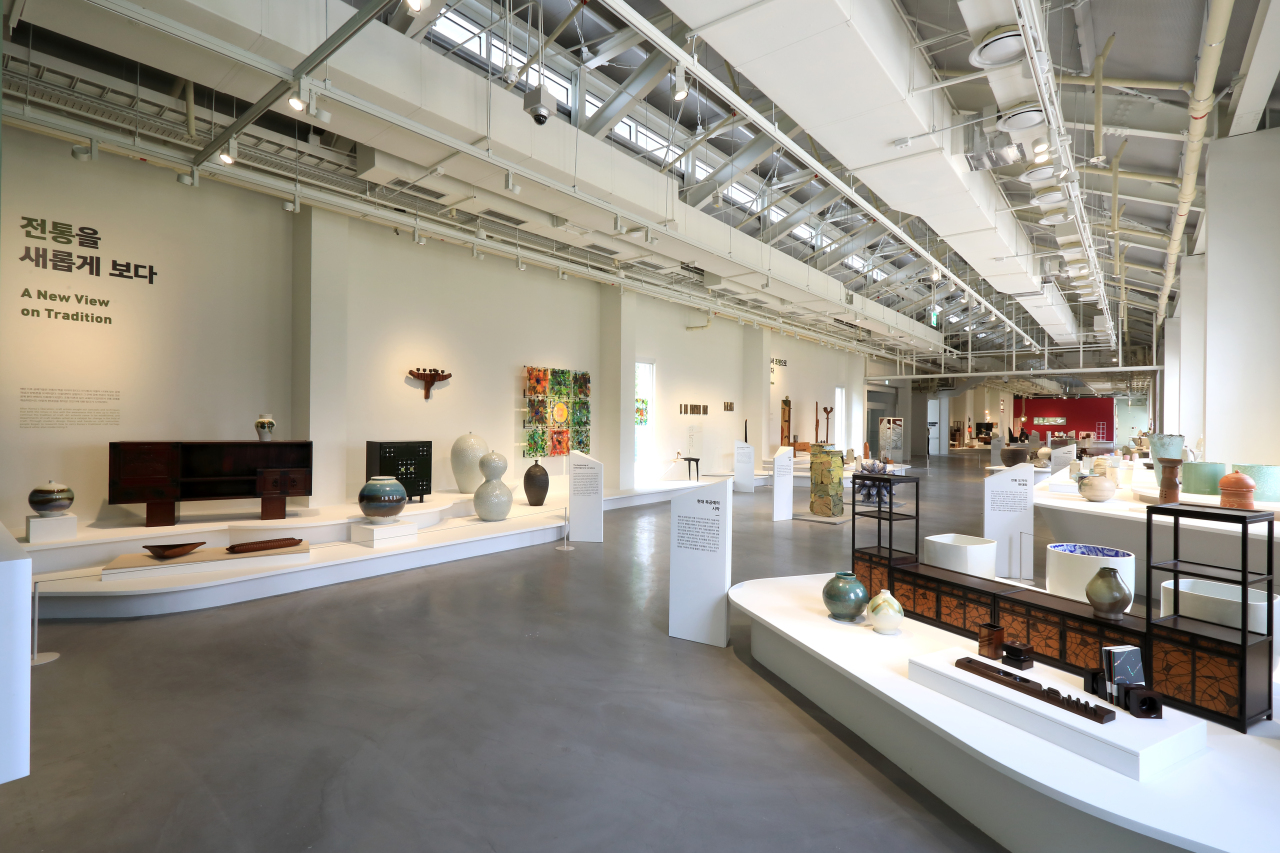 An installation view of “Craft, Moving Beyond Time and Boundaries” at the Seoul Museum of Craft Art
As soon as the Seoul Museum of Craft Art opened in late July near Insa-dong, a popular tourist destination in central Seoul, visitor slots filled up quickly. That was an indication of how long people had waited for a museum dedicated to Korean crafts.

The country’s first craft museum occupies the former site of Poongmoon Girls’ High School in Jongno-gu, which relocated to Gangnam-gu in 2017 and became a coed school.

Some of the school buildings have been renovated and turned into exhibition halls. The Craft Garden, part of the museum, is an open space where people can freely enter. Within the building, a window that overlooks the Craft Garden has gone viral on social media as a popular photo zone. 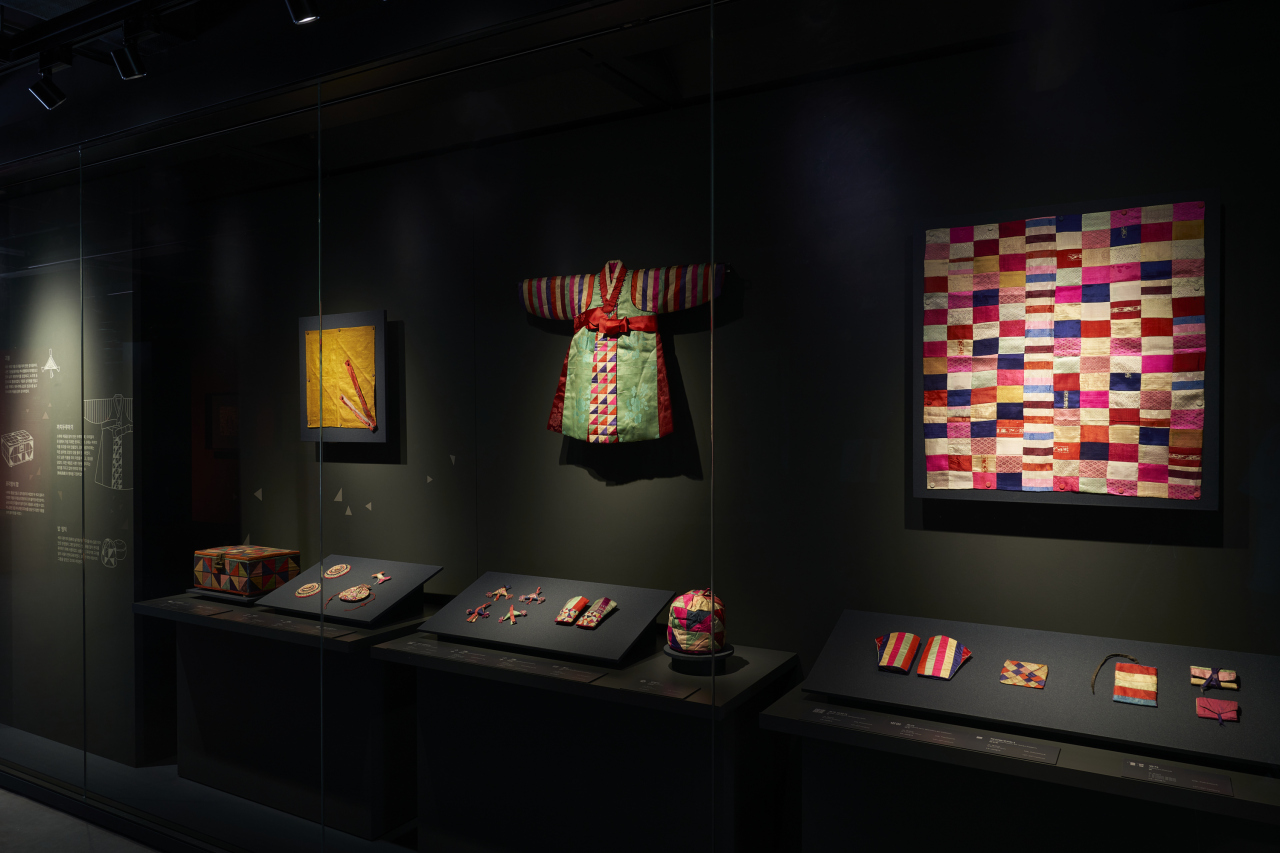 An installation view of the exhibition “Bojagi, Embracing Daily Life” at the Seoul Museum of Craft Art
The museum is currently hosting eight exhibitions, including two permanent exhibitions featuring craft works donated by the late Huh Dong-hwa, the founder of the Museum of Korean Embroidery, and his wife, Park Young-sook. The couple donated some 5,000 artworks to the museum right before Huh’s death in 2018 at the age of 92, according to SEMOCA.

The two permanent exhibitions -- “Embroidery in Bloom” and “Bojagi, Embracing Daily Life” -- show the beauty of Korean embroidery and “bojagi,” or wrapping cloths. Among the exhibits is “Folding Screen of Embroidered Sagye Bungyeongdo,” which is Treasure No. 653. The four-piece folding screen is from the late Goryeo Kingdom (918-1392) and depicts a different season on each section with a potted miniaturized plant or tree called a “bunjae.”

“Collecting takes time and devotion,” Huh wrote in his book “The Painstaking Legwork of Collecting.” “It took me 10 years to get my hands on the ‘Guunmong Folding Screen’ and there are things that took more time than that. When the owners see how devoted you are, they become moved by your efforts and hand their items over to you.”

While many people know about “chaekgeori” folding screens -- depicting books and other assorted items on bookshelves -- far fewer people are aware that there is an embroidered chaekgeori folding screen. This work, the 19th-century silk “Ten-Panel Folding Screen of Embroidered Scholar’s Accoutrement,” is on display at SEMOCA and shows the elegance and exquisite beauty of Korean craftsmanship.

The museum has made good use of technology, offering descriptions in Korean and English using digital screens that visitors can touch and swipe to learn about each item. 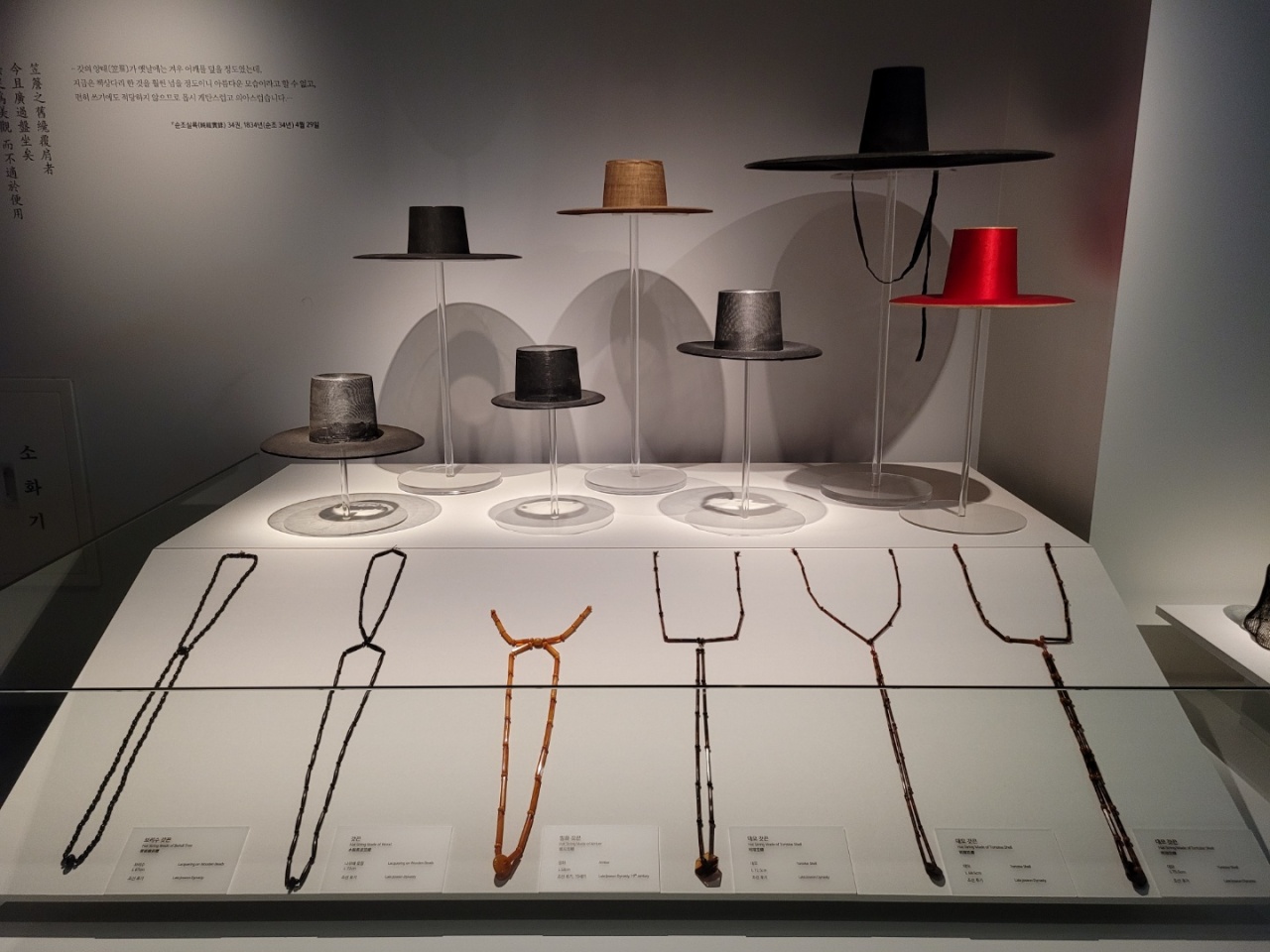 Various “gat,” or Korean traditional hats made of horsehair, and hat strings from the late Joseon era (1392-1910) are on display at the Seoul Museum of Craft Art
“Museums have evolved over time,” said SEMOCA communication manager Jo A-ra during a tour of the museum. “A library specialized in craftworks and a gift shop that has a variety of craft artworks will open soon. You can definitely look forward to it.”

The special exhibition “Craft, Moving Beyond Time and Boundaries” introduces contemporary craft works and shows how traditional Korean craftsmanship has inspired artists. A variety of “soban,” or small traditional portable tables used to serve food, have been reinterpreted by contemporary artists and included in the exhibition.

Next to the exhibition buildings is a children’s museum, in which a Craft Village houses a variety of studios where kids can gain hands-on craft experience.

Other exhibitions at SEMOCA include “Artisans – Making the Better World,” “Earrings, Connecting the Past and the Present,” “From Nature to Crafts Artisans – Creators of Craft Heritage” and “Heritage of Seoul’s Traditional Crafts.”

Reservations are required through the museum’s official website. The museum is open Tuesday to Sunday from 10 a.m. to 6 p.m. It is closed on Mondays.