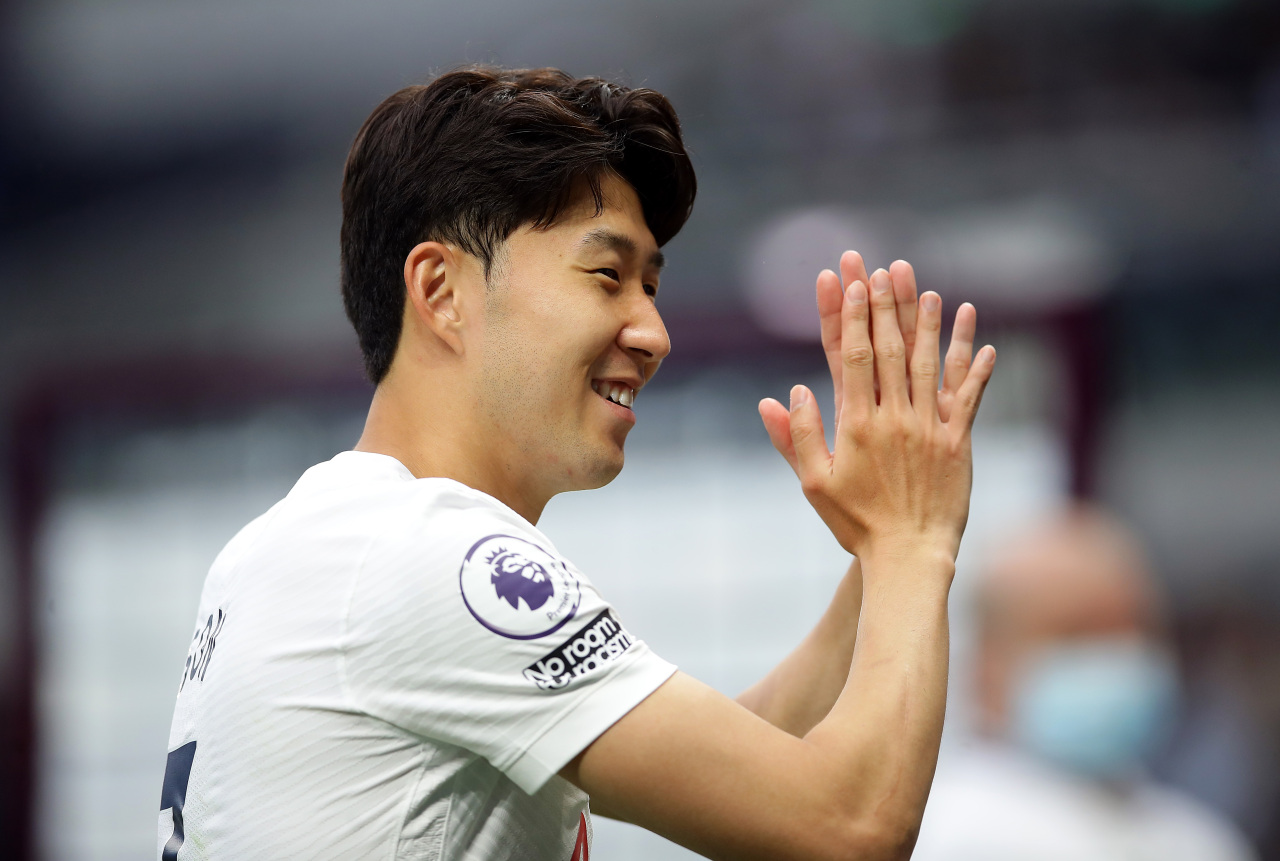 In this Reuters photo, Son Heung-min of Tottenham Hotspur celebrates his club's 1-0 victory over Manchester City in a Premier League match at Tottenham Hotspur Stadium in London on Sunday. (Reuters-Yonhap)
South Korean football fans should adjust their alarm clocks for Friday morning.

Tottenham Hotspur and their South Korean star Son Heung-min are visiting Portugal this week to play FC Pacos de Ferreira in the first of two playoff matches for the inaugural UEFA Europa Conference League. The kickoff at Estadio Capital do Movel is 7:30 p.m. Thursday in the club's namesake Portuguese town, or 3:30 a.m. Friday in South Korea.

Tottenham head coach Nuno Espirito Santo tipped his hand during his prematch press conference held in Pacos de Ferreira on Wednesday (local time), when he said players who started Sunday's Premier League match against Manchester City, including Son, will not be in the starting XI against the Portuguese club.

"It was a decision that we made. It was important that our players, all of them, have real competition. For tomorrow, the decision is that the players who started on Sunday are not going to be involved," Espirito Santo said. The coach later clarified that such players will be held out of the starting lineup but didn't elaborate whether they will be glued to the bench for the whole match.

Son played the full match against Man City and scored the team's lone goal in their 1-0 season-opening victory Sunday. He also earned a selection to the Premier League Team of the Week as one of three forwards.

After the trip to Portugal, Tottenham will play their second Premier League match of the season against Wolverhampton Wanderers on Sunday. Then the second leg of the Conference League playoff against Pacos will be Aug. 26 at Tottenham Hotspur Stadium.

Espirito Santo bristled at the question that he is not taking the Conference League, a third-tier UEFA club tournament below the Champions League and the Europa League, all that seriously.

"We take it very seriously this competition. What we consider, this is a good chance for us to have the squad involved, to have young players from the academy also on the bench potentially, and this is how we want to build our squad, to have real competition,"

Harry Kane, the reigning Premier League scoring champion at the center of rampant transfer speculation, did not travel with Tottenham.

Kane was late to join Tottenham's preseason training camp and sat out the Man City match.

"He is better than yesterday. And hopefully, he is going to be better tomorrow," Espirito Santo said. "This is how all the players who are working should be. Day by day. Recovering and progressing in terms of fitness." (Yonhap)