Dot Inc. Highly recognized for its smart technology for the visually impaired at XTC Global Final, a competition between 3,700 startups from 92 countries

SEOUL, South Korea, Aug. 13, 2021 /PRNewswire/ -- Dot Inc., a social startup and certified B-corporation, was recently named the winner of TechCrunch's Extreme Tech Challenge (XTC), "the world's largest startup competition for entrepreneurs addressing the globe's most serious challenges"—as per Forbes. Dot Inc., has been a member of the Born2Global Centre since 2020, and is a technology-based social venture that develops innovative solutions for people with disabilities, especially those who are visually impaired and mobility handicapped. 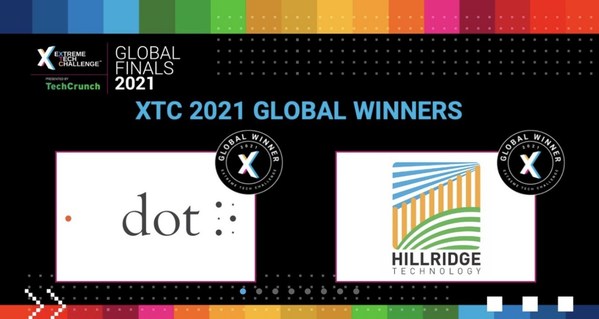 XTC is an annually-held global competition between startups aimed at solving problems outlined in the UN's 17 Sustainable Development Goals (SDGs). This year, over 3,700 startups from 92 countries participated in the fierce competition for good. Dot Inc. took first in the preliminaries in "Enabling Technology", one of the seven categories of the competition, before advancing to the finals. The company eventually was named "Overall Winners" of the entire competition, along with Hillridge Technology from Australia.

As consensus winners of XTC, Dot Inc. will receive direct guidance for global expansion from the internationally-acclaimed XTC judge panel. The XTC cohort includes: Jerry Yang, co-founder of Yahoo; Young Sohn, ex-CSO of Samsung Electronics and currently Chairman of the Board at Harman International; and Bill Tai of Charles River Ventures, an early investor of Zoom and other fast-growing startups.

Eric Ju Yoon Kim and Ki Kwang Sung, Dot Inc.'s founders, commented on the company's win, saying, "As a startup built on people-driven innovation, it is an honor and a blessing to be highlighted through this competition where startups from around the world are all working together to achieve causeworthy goals. We hope to use this win as inspiration and as a springboard to help Dot's accessible technology help people around the world live more fulfilled and independent lives."

Dot Inc. first shocked the world with their "Dot Watch," the world's first Braille smartwatch, that found acclaim with global influencers like Stevie Wonder and Andrea Bocelli. Now, their impressive portfolio includes the "Dot Pad," a tactile pad aimed to help the visually impaired experience images through touch, and the "Dot Kiosk", barrier-free tech that includes a smart kiosk and an indoor navigation system for inclusive access to infrastructure for all people. All heights included, as the Kiosk boasts an auto-height adjustment function that uses camera sensors to raise and lower to the eye level of the user. They have stated that the Dot Kiosk system was designed so that Hellen Keller could access any part of the airport, museum, or building without any additional guidance.

It seems that the company's vision has struck the right chord at the right time, especially in a post-pandemic world that begs for more accessibility innovation and contactless services. So far, the company has attracted over 13M USD in external investments and boasts over 120 technology patents through innovative research and development. In June of 2021, the company was selected in a government project, led by the U.S. Dept. of Education, to be the exclusive supplier of tactile educational pads for the entire nation. As a key partner of the project, Dot Inc. received and signed a contract worth 30M USD for the exclusive supply of Dot's devices. Most recently, the company received international attention during a recent Korean presidential visit to Spain when President Moon Jae-in and First Lady Kim Jung-sook personally presented a Dot Watch to the ONCE Foundation, a national organization for the blind and visually-impaired in Spain.

Dot Inc.'s top priority and mission is to close the information gap for the visually impaired, and to help them live more fulfilling and independent lives. Through the advancement of enabling tech, they wish to bring in a paradigm of inclusivity in all corners of the world.