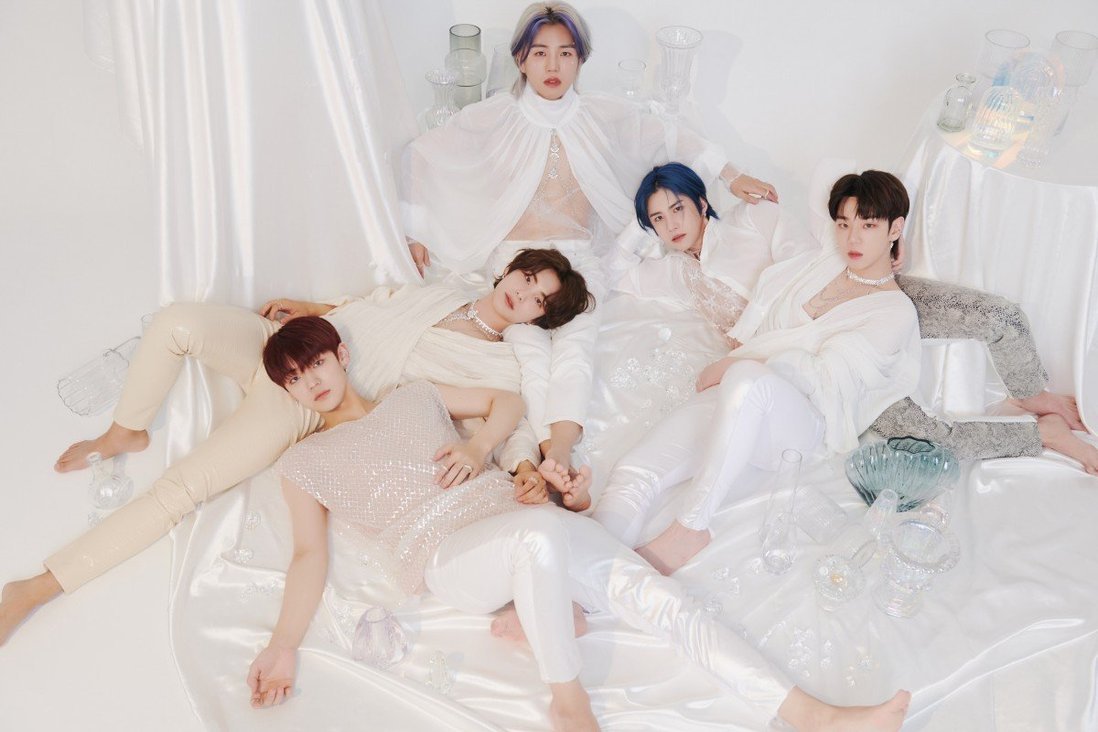 (Beat Interactive)
Boy band A.C.E, whose name stands for “Adventure Calling Emotions,” splashed into the music scene with bold ambitions on May 23, 2017. Its five members have come a long way since then, establishing an energetic presence and delving into unique performance styles. But the group’s path to stardom was not an easy one.

Online reality shows and popular audition programs on television often function as gateways for K-pop idol-hopefuls looking to make their debut. But in 2016, A.C.E took the road less traveled and built its musical backbone with busking.

“I think we won fans over by showcasing our hard work and theatrical performances,” rapper Byeong-kwan said.

The bandmates recalled being risk-takers who stood strong while waiting for the opportunity to advance. “We worked really hard, step by step, with our street performances, which is why I think we were able to build up our fandom, also known as Choice,” Chan said.

The main vocalist said their guerilla gigs had brought them closer to their fans. Busking had given them a glimmer of hope, he added, and the fans were the driving force behind their work.

“Our fans always brim us with excitement and happiness when we release or do something new. And outdoor performances are a place where we get to feel and see their sublime support toward us.”

Chan added that “the love our fans send is irreplaceable,” saying A.C.E wouldn’t have gotten this high without Choice’s dedication and warmth.

Dong-hun said fans talked a lot about the group’s busking performances. “Many people think of performing on the streets as something interesting, but it’s actually a place for us where we can belt out one more song. When you jam with the crowd, including our fans, and if they revel in our tune, that hits differently,” he said.

The main vocalist added that passersby could feel the band’s earnestness in its music when it performed on the streets, saying that experience produced a euphoria. Jun also said the bandmates were ready to travel around the globe when borders open up again and revisit the bustling Hongdae district in western Seoul, which they consider their hometown.

Reminiscing about the good old days, Jun said the band was “more than ready to get out and perform” after the COVID-19 pandemic.

It’s been five years since A.C.E made its debut, but each member of the five-piece act is still a kid at heart. The bandmates still put massive effort into their music. The quintet’s fifth EP, “Siren: Dawn,” released in June, was a milestone in its career.

The performers used an ethereal, mermaid-like concept to express melancholic feelings and turn them into something aesthetically pleasing.

Lead vocalist and dancer Jun spoke about how the group had taken a leap of faith by trying different styles and ideas. “When we released our fourth EP, only Chan and I attempted shooting underwater, but all the members had participated this time to delineate a sorrowful emotion about loss and how one muddles through hard times by transforming into a mermaid,” he said.

The musicians built their careers by finding unique ways to convey their thematic storytelling.

The song “Goblin (Favorite Boys)” garnered much attention by interweaving Korean folklore with traditional sounds and aesthetic elements to create a mixture of melody and fairy-tale charm, as depicted in the video for “Higher.”

The K-pop act has also defied convention with its album concepts. The choreography for its first single, “Cactus,” suggested the tall branches of a cactus. The band teased a snippet of its next album at the same time, saying it would be extraordinary.

Seeking recognition in the domestic music scene, A.C.E has made a solid start by getting the song “Higher” onto the charts. “It was the first time we listed our name on a prominent domestic music chart. I think the highest we landed was the 24th,” Chan said, thanking fans.

The band has landed high on many charts in and out of the country, topping the iTunes Worldwide Albums Chart and the K-pop Music Albums Chart. It has also made several iTunes music charts, including the Top Albums Chart in 12 countries such as Indonesia and Russia.

Speaking about the group’s vibrancy in the global music scene, Byeong-kwan said A.C.E had kept pushing the envelope. Recently, the band was invited to lead a series of dance workshops at Korean Cultural Center Brussels. K-pop Summer School with A.C.E kicks off Aug. 20 and runs until Sept. 3.

In unison, the five bandmates chanted that they had never rested on their laurels and promised they never would.

Looking back on the group’s five-year voyage, Wow, who was the temporary leader for the latest EP, talked about how much the group had learned in the course of its work.

“We were busy filling in the missing parts that were vividly visible, but we came across how valuable emptiness is. We actually practiced letting go of our eagerness and leaving the space vacant,” the rapper said.

Wow added that he and his bandmates were grateful to Choices and their agency. “I would genuinely like to thank all the people involved in our journey because we were able to make memories to treasure,” he said.

Wow hopes to continue to work hand in hand with the other band members. “It has only been five years since we made our appearance, but I continuously want to make good music with the boys.”