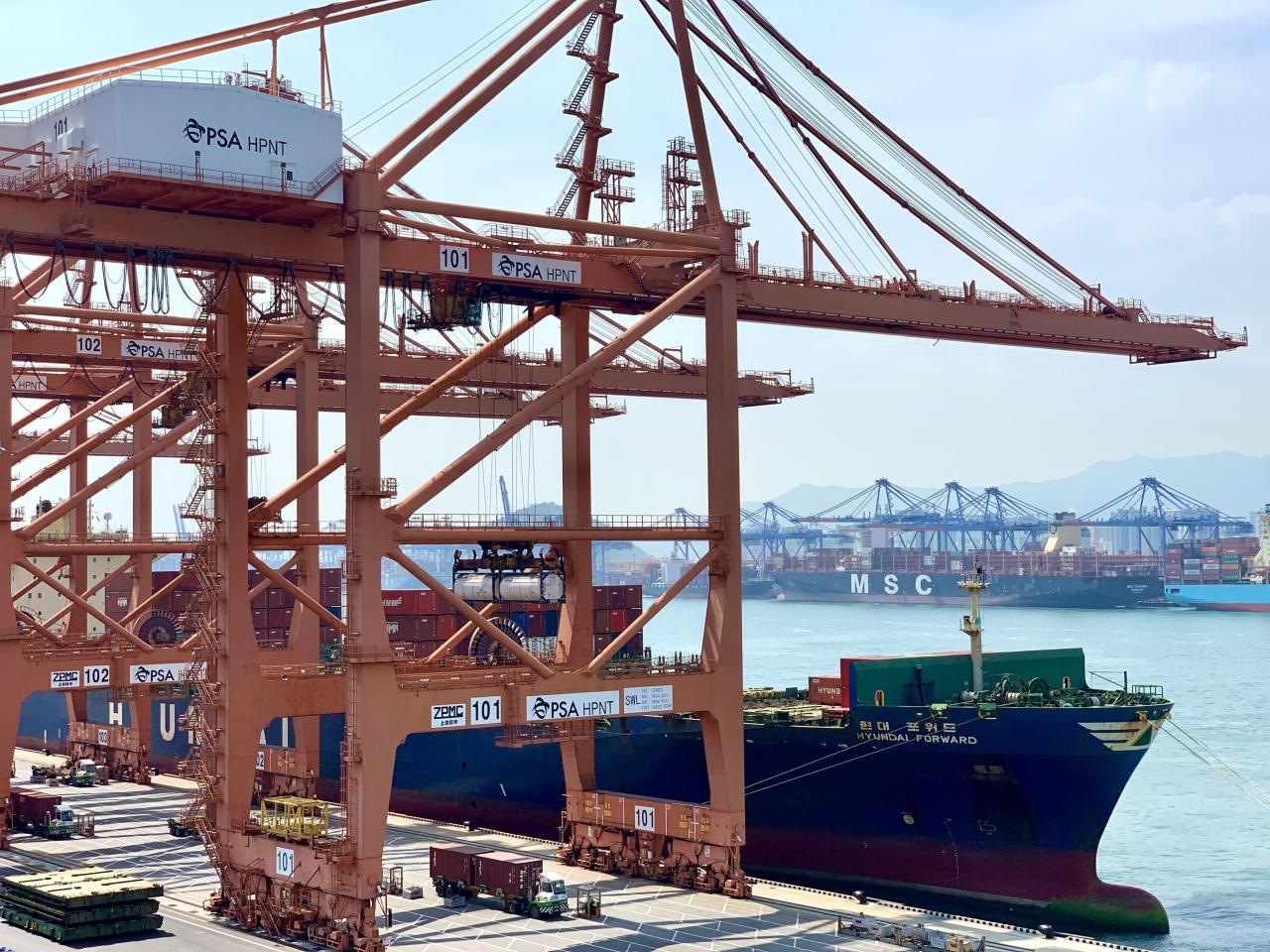 A HMM container carrier docked at a port in Busan. (Yonhap)
Businesses and experts in export-reliant South Korea on Monday expressed concerns over the European Union and the United States’ moves to levy a carbon emissions tax on imported goods.

Jitters came as the EU last month put forward plans for the world’s first carbon border tax, which would be levied on imports of goods from economies with laxer climate rules from 2026. US lawmakers then began floating plans of including the tariff as part of a $3.5 trillion budget reconciliation bill.

The request sent to EU President Ursula von der Leyen and Executive Vice President for the European Green Deal at the European Commission Frans Timmermans stresses that Korea has already employed its own emissions trading scheme, which is a cap-and-trade system for greenhouse gas emissions, according to the FKI. The scheme, launched in 2015, is considered the second-largest in scale after the European Union Emissions Trading System.

The FKI complained that under the current circumstances, the EU’s decision to levy a carbon border tax on Korea would lead to unfair double taxation on one of the few economies that has adopted its own cap-and-trade system. It could grow into a new type of trade protectionism as well, the organization said, adding it has yet to receive a response from the EU. The organization has been closely monitoring the developments, but has yet to send a similar request as the US plans are in the early stages.

Cho Gyeong-lyeob, chief economist at the Korea Economic Research Institute, echoed the FKI’s concern that energy-intensive industries such as steel and cement are set to suffer. “If the carbon border tax is levied in a coercive manner, the industries will suffer and plan B won’t exist for them for a while,“ he said.

Cho added that the pace of cutting back carbon emissions in the industries have to be in line with the development of green technologies, which could reduce emissions at an affordable cost.

On top of concerns for the businesses, once the US joins in the implementation of the carbon border tax, Korea’s exports, which are now quickly rebounding from COVID-19 woes, would be dealt a heavy blow, a recent Bank of Korea report showed.

If both the EU and the US start levying carbon border taxes, Asia’s fourth-largest economy’s outbound shipments would shed a combined 1.1 percent, or $7.1 billion, every year, the BOK said. The EU’s plan alone -- which seeks to charge importers $50 per every ton of carbon dioxide emissions -- would cost Korea’s exports some $3.2 billion annually. The US tariff would cost Korea $3.9 billion every year, if the world’s largest economy adopts the same $50 rule.

Korea would lose its cost advantage in manufacturing once the tax is levied and the tariff would affect its trade ties with China, which onlookers expect to be heavily hit by the tax rules, as the world’s largest greenhouse gas emitter and raw materials manufacturer.

The BOK pinpointed Korea’s autos and shipbuilding industry to be hit most by the tariffs, with the steel industry next in line.

But pointing to the nation’s own emissions trading scheme, the BOK also rolled out a rosier outlook. It said that if the US and EU takes the cap-and-trade system -- which currently levies some $15 per every ton of emissions -- into account and slashes the level of tax to some $35 per ton, then Korea’s annual exports would only shed a combined 0.7 percent.

The businesses would need government support to obtain the “rosier outlook,” but Cho of KERI says that is an unlikely scenario.

“The Moon Jae-in administration is not a business-friendly administration, and with its history of dealing with similar cases, the businesses are likely not to receive the support they’ll need,” he said.

South Korea’s exports jumped 29.6 percent on-year to $55.4 billion in July to a record high, extending gains to a ninth consecutive month, according to the latest data compiled by the Ministry of Trade, Industry and Energy.