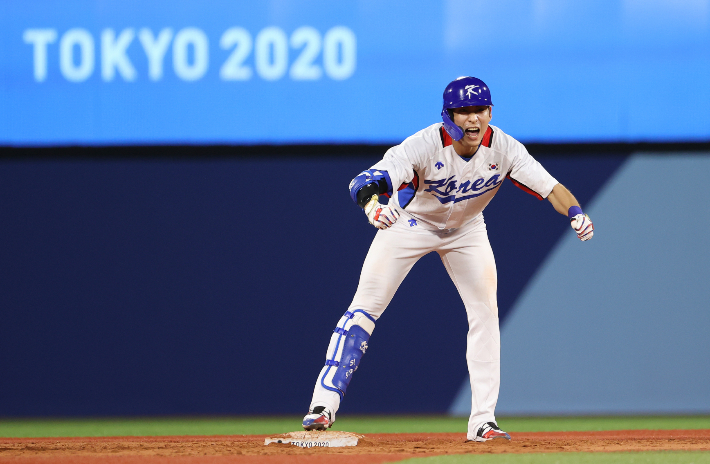 Lee Jung-hoo of South Korea celebrates his game-tying double against the Dominican Republic in the bottom of the ninth inning of the teams' first round game of the Tokyo Olympic baseball tournament at Yokohama Stadium in Yokohama, Japan, on Sunday. (Yonhap)
YOKOHAMA -- First, it was the daughter of a former baseball player winning a medal at the Tokyo Olympics. Then came the daughter of an ex-gymnast joining her father as an Olympic medalist.

Now, one of South Korea's top baseball players wants a medal for himself, too.

Outfielder Lee Jung-hoo helped push himself and his team toward that goal Sunday night, delivering a game-tying double against the Dominican Republic in the ninth inning of a 4-3 victory. Lee later came around to score the winning run on Kim Hyun-soo's walk-off hit.

Lee is the son of Lee Jong-beom, one of the greatest players in the history of the Korea Baseball Organization (KBO). Any shadow cast by former athletes on their children playing the same sport can be a long one, although the junior Lee has come into his own since winning the KBO's Rookie of the Year prize in 2017.

Lee is now an indispensable part of an offense that has been mostly sputtering along. He's batting .308 with two RBIs and two runs scored in three games.

Hours before South Korea's improbable win, gymnast Yeo Seo-jeong won the bronze medal in the women's vault. A quarter century earlier, her father, Yeo Hong-chul won the silver medal in the men's vault. They're the first father-daughter duo from South Korea to have each won an Olympic medal.

Over the weekend, Yoon Ji-su, a sabre fencer and daughter of former KBO pitcher Yoon Hak-gil, carried her team to the bronze medal. It was South Korea's first Olympic medal in the women's sabre team event.

He said he's been speaking to his father on a regular basis and those conversations have helped him with mental preparation.

"He's been telling me not to put too much pressure on myself," the son said. "He said I should just stick to things that I can do. And I have such great teammates around me here that I feel no pressure at all."

South Korea, the defending baseball champion, has won two of its first three games, and both victories came in their last plate appearances. These games have been too close for comfort, but Lee said he is still having a lot of fun.

"With the national uniform on, we know all about expectations and pressure to perform," Lee said. "But this has been a great experience. I've faced some quality pitchers, and I think seeing tough pitchers can only help me."

Lee is of a generation of players who took up baseball after watching Korea storm to the gold medal at the 2008 Beijing Olympics. Now 22, Lee hopes to inspire children of the current generation, too.

"I think kids in elementary school now must be going through the same feelings that I did back then," Lee said. "Hopefully, our Olympic performance will make more children take interest in baseball." (Yonhap)