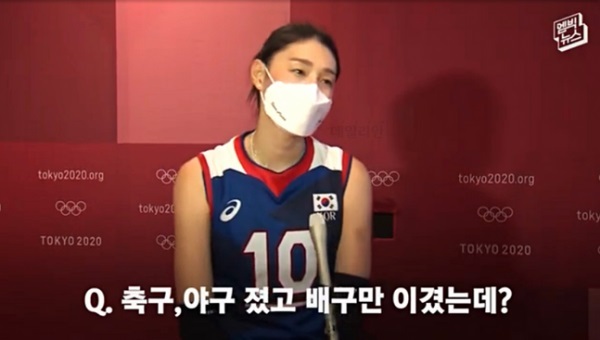 An image of MBC‘s interview with Kim Yeon-koung, captured from MBC’s YouTube channel “mbignews” (MBC)
Less than a week after MBC President Park Sung-jae publicly apologized for inappropriate coverage of the Tokyo Games, the broadcaster came under fire again Sunday for misleading captions on an interview with South Korean volleyball captain Kim Yeon-koung.

In the video, the reporter says, “You may not know this, but the South Korean soccer team and baseball team lost their games today.”

Kim responded to this question by saying “I am more proud.”

However, the video’s caption rephrased the question to “(South Korea) lost soccer and baseball games and only won volleyball. How do you feel about that?” and featured Kim’s answer which said, “I am more proud.”

The video soon sparked outrage online as netizens claimed that it makes Kim look as if she degraded the other sports teams.

“That is not the question that Kim was asked,” a netizen commented on the YouTube video.

“How long has it been since MBC last apologized?” another angry comment read.

In response, MBC’s YouTube channel deleted the video and posted a new video of Kim’s interview with captions that accurately state the reporter’s question on Sunday.

This was not the first time that MBC presented inappropriate content during the Tokyo Olympics.

On July 24, MBC posted a formal apology in Korean and English on its website for its choosing cliched or negative images to represent different countries while airing the opening ceremony of the Tokyo Olympics.

Two days after the first apology, the broadcaster apologized once again for airing a caption gloating over Romanian soccer player Rajvan Marin’s own goal during the match between South Korea and Romania.