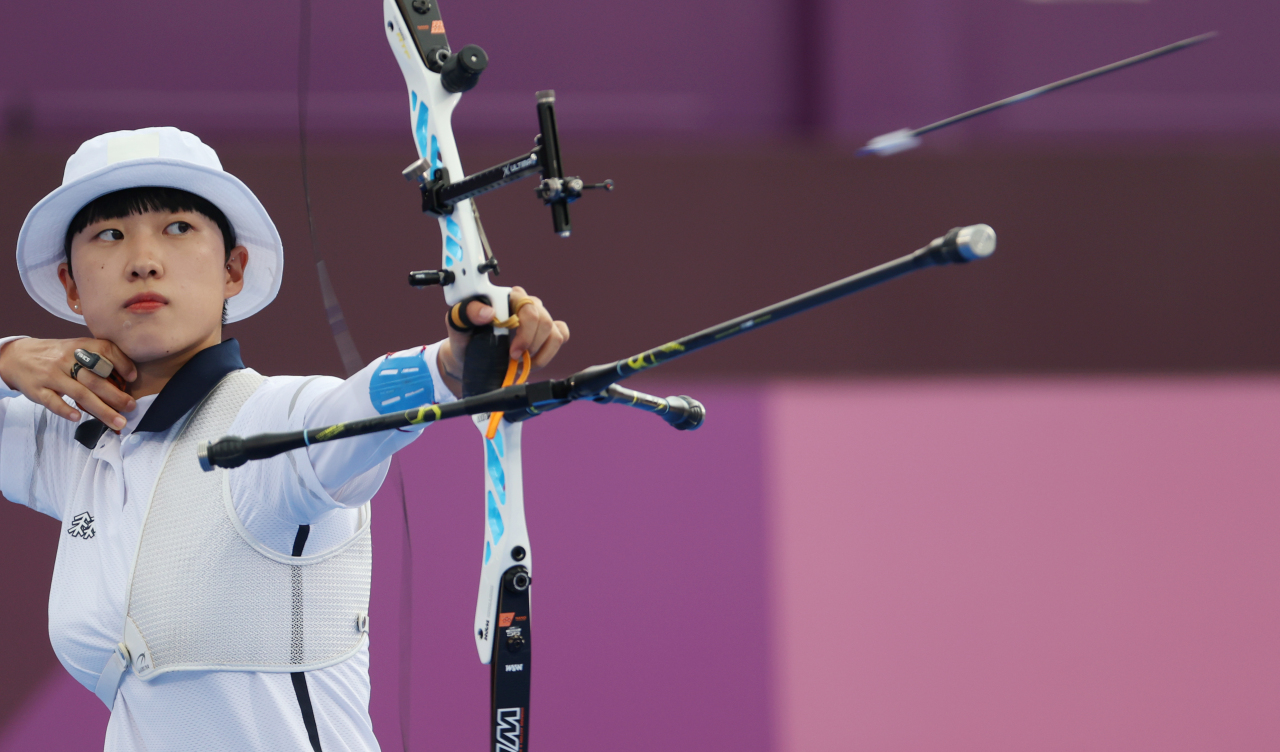 An San of South Korea shoots her arrow during the final of the women's individual archery event at the Tokyo Olympics at Yumenoshima Park Archery Field in Tokyo on Friday. (Yonhap)
TOKYO -- An San shot herself into the record books on Friday, winning the women's individual archery event in Tokyo to become the first archer ever to claim three gold medals at a single Olympics.

An is also the first South Korean triple gold medalist at a Summer Olympics, and the first athlete with three gold medals in Tokyo.

She defeated Elena Osipova of the Russian Olympic Committee by the set score of 6-5 in the final at Yumenoshima Park Archery Field in the Japanese capital, completing the unprecedented trifecta after winning the mixed team and the women's team gold medals.

The mixed team event made its Olympic debut here last week, meaning this was the first Olympics in which an archer had an opportunity to win three gold medals.

An's teammate, Kim Je-deok, was gone early in the men's individual event, leaving the 20-year-old as the only one with a chance to make history.

An rose to the occasion in a memorable final against Osipova, beating her in a shoot-off with a 10.

In the individual match, archers each shoot three arrows per set. A set win is worth two points and a tie is good for one point. The first to reach six points is the winner. But if two archers are tied after five sets, they go to a shoot-off, with the higher score or the arrow closer to 10 earning the victory.

An opened the final with an uncharacteristic 8 but bounced back with consecutive 10s for 28. Osipova matched that score and the two were tied 1-1 after one set.

In the shoot-off, An stepped up and hit a 10 to put pressure on Osipova. The Russian only hit an 8, her lowest score of the final coming at the most inopportune moment.

An, who has been the picture of cool, calm and collected all week, finally showed some emotion during the medal ceremony.

"When it was all over, I felt like my heart was going to explode," An said. "I wasn't really thinking about winning my third gold. After winning my two team titles, I only wanted to let luck take care of everything. I guess I got lucky today."