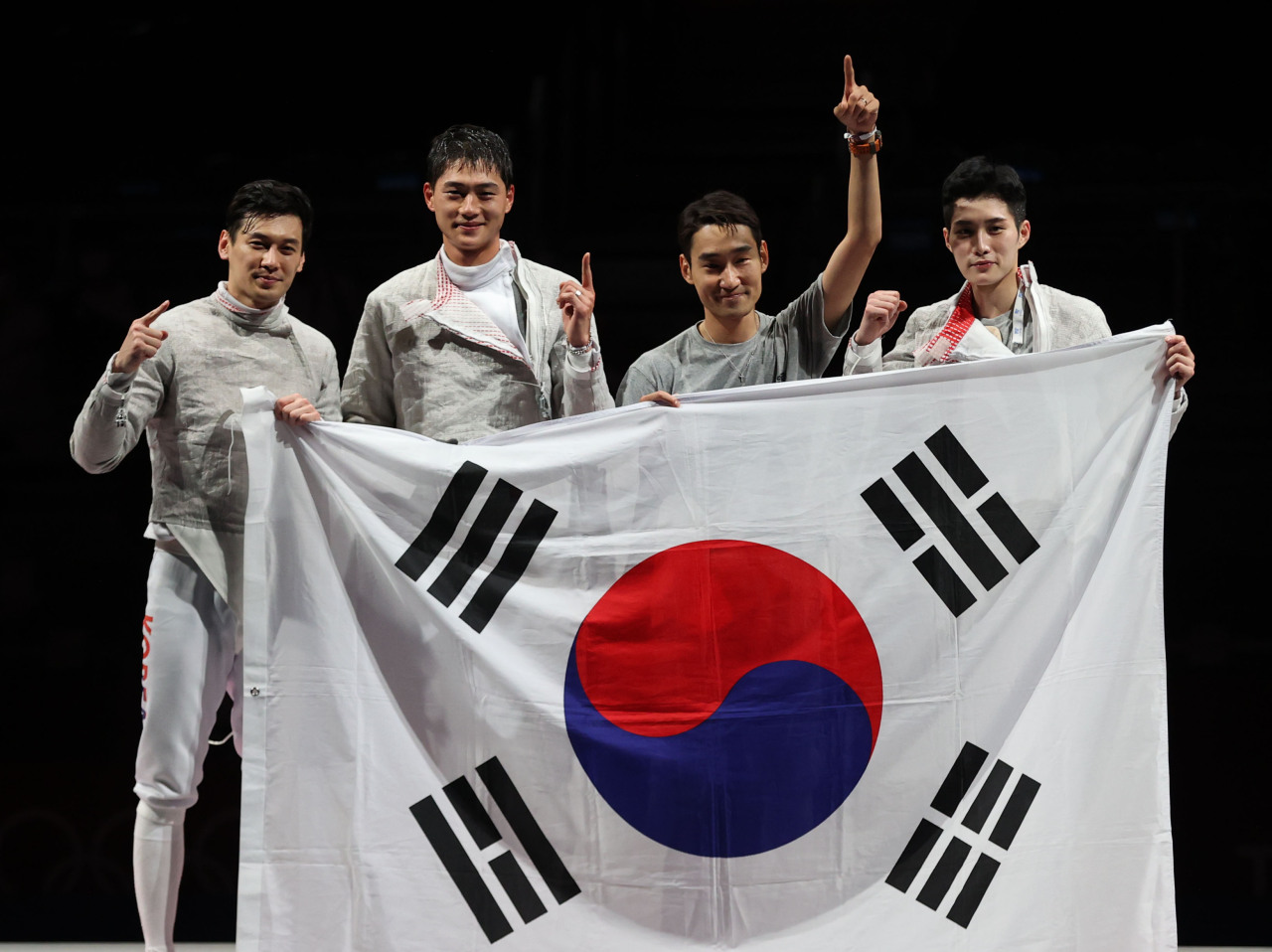 South Korean fencers Gu Bon-gil, Oh Sang-uk, Kim Jung-hwan and Kim Jun-ho (L to R) celebrate their victory over Italy in the final of the men's team sabre fencing event at the Tokyo Olympics at Makuhari Messe Hall B in Chiba, Japan, on Wednesday. (Yonhap)
As the belated Tokyo Olympics were nearly halfway over Friday, South Korean sports stars' world-class performances and their teamwork have been creating a fresh buzz on social media here.

On the front lines of the buzz are the men's sabre fencing team of Kim Jung-hwan, Gu Bon-gil, Oh Sang-uk and Kim Jun-ho, who won South Korea's second straight gold in the team event Wednesday.

Sports fans call the four-member team "Avengers" for their gold medal for two straight Olympics and overwhelming power to rout their Italian counterpart 45-26 in the finals at Tokyo.

Two of them, Kim Jung-hwan and Gu Bon-gil, were also members of the team in 2012 when they took gold at the London Olympics.

At the same time, the athletes' good-looking appearances caught the eyes of Korean viewers, with their photos and fan-drawn illustrations going viral on social media.

Some compared the team with the French historical adventure novel "The Three Musketeers" or "The F4," referring to a group of popular and powerful boys in the 2009 Korean TV series "Boys Over Flowers."

Fans are also entertained by the Olympic dominance of South Korean archers, who have already secured three gold medals at Tokyo.

In particular, a parade of perfect 10-point shots by Kim Je-deok, Kim Woo-jin and Oh Jin-hyek in the finals of the men's team event heated up sports fan sites in South Korea. They defeated Chinese Taipei by the set score of 6-0 to snatch the gold.

In the third set, the final shooter Oh needed a nine-point shot to get the gold medal or they had to go through another set. At that nervous, tense moment, the veteran hit a 10 and uttered, "The end."

His last words crazed South Koreans, who held their breath watching the team's final round, and generated a variety of parodies and wordplays on the internet.

Moreover, fans have been casting actors for an imaginary sports movie titled "Archery" with Doh Kyung-soo, or D.O. of K-pop band EXO, widely mentioned for the role of the teenage archer Kim Je-deok.

Teen swimmer Hwang Sun-woo is also in the center of online spotlight after breaking Korean and Asian records in the men's 200m and 100m freestyle events.

South Koreans, who have long waited for a new "marine boy" after multiple Olympic medalist Park Tae-hwan, have already searched for the brand and price of his swimsuit, along with a slew of congratulatory and supportive messages.

The 18-year-old swimmer expressed his gratitude to his fans on social media for their enthusiastic support and encouragement. (Yonhap)