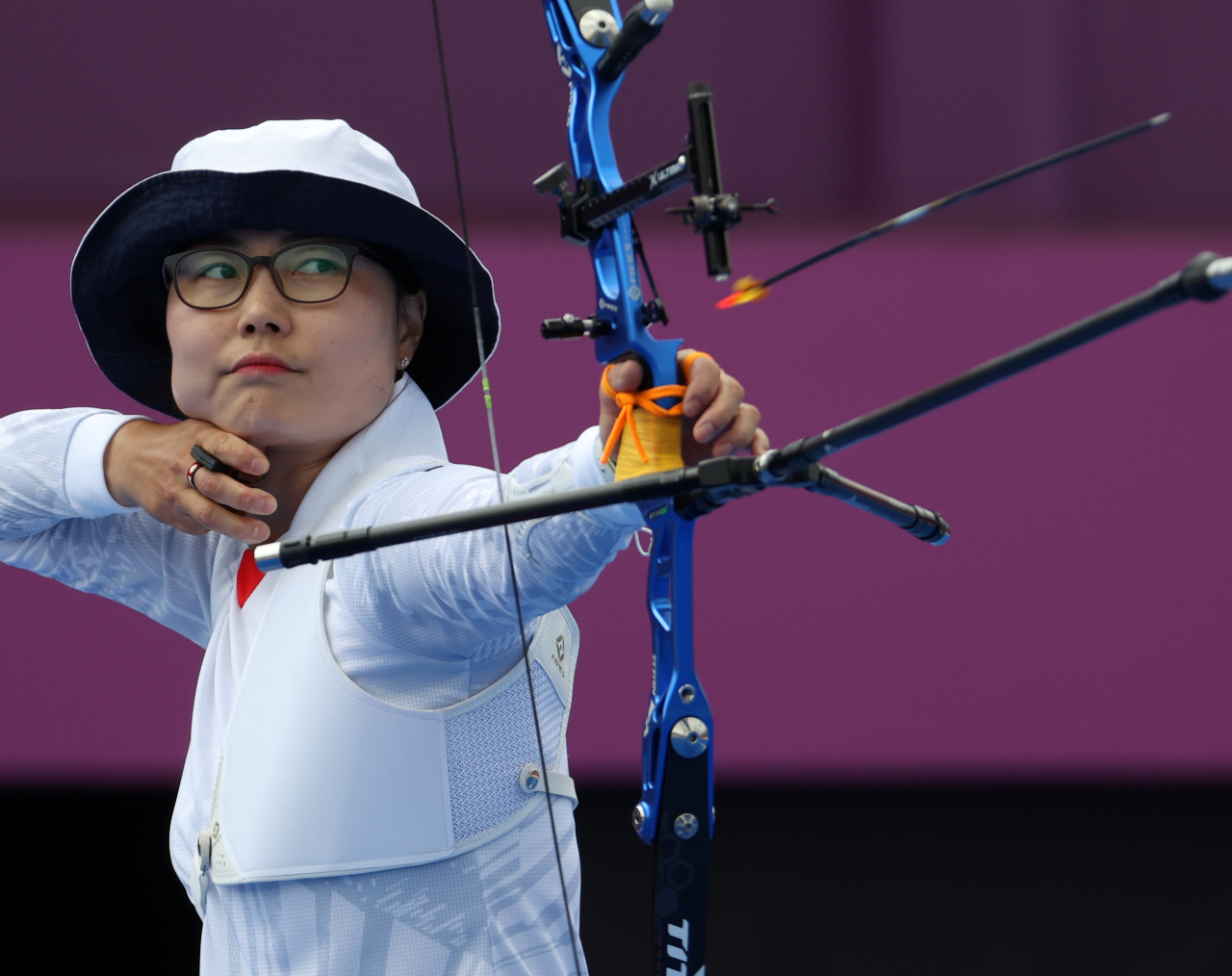 Ren Hayakawa of Japan competes in the round of 16 match against An San of South Korea in the round of 16 in the women's archery individual event at the Tokyo Olympics at Yumenoshima Park Archery Field in Tokyo on Friday. (Yonhap)
TOKYO -- When the Japanese archer Ren Hayakawa watches her South Korean opponents break records and win medals at the Olympics, she does so with a unique sense of pride.

Of course, Japan and South Korea remain sporting rivals across the board. But Hayakawa, who was born in South Korea and became naturalized as Japanese citizen in 2007, still feels a tug when it comes to athletes from her birth country.

Hayakawa lost to An San of South Korea by the set score of 6-4 in the round of 16 in the women's individual event at the Tokyo Olympics on Friday. Hayakawa gave An, a double gold medalist here already, all she could handle, winning a couple of sets and hitting nothing but 10s and 9s until the closing 8 that came after the match was already decided.

"It was an honor to face An San. When will I ever go up against such a great archer?" Hayakawa told Korean reporters at Yumenoshima Park Archery Field. "I am so proud that all South Korean archers have done well here."

Hayakawa made her Olympic debut for Japan at the 2012 London Olympics and helped the country to a bronze medal in the team event. She has faced South Korean archers on numerous occasions over the years, but Hayakawa admitted Friday's match carried extra significance because it was in Japan and because of her friendship with An.

"For the most part, I think I've overcome most of the mental hurdles I used to have when I faced South Korean archers before," Hayakawa said. "I just hope for the best for everyone. We had an extra year of training for this Olympics (because of the pandemic-caused postponement) and we all know how much we've gone through."

Hayakawa, 33, said the 20-year-old An is the epitome of cool, calm and collected when she has her bow in her hands. But away from the field?

"She lets her guard down a bit," Hayakawa said. "She is like a little sister to me."

Though Japanese citizens of South Korean descent have often spoken of facing discrimination -- a subject recently broached by the Tokyo-born Korean judoka An Chang-rim -- Hayakawa said she had no such issues.

"If anything, people thanked me for naturalizing (and joining the archery team)," Hayakawa said. "Early on, I would get so nervous when facing Korean archers. But then my coaches would remind me that I was Japanese now."

Hayakawa, whose younger sister, Nami, competed in the 2008 Olympics, said she wants to help grow archery in Japan.