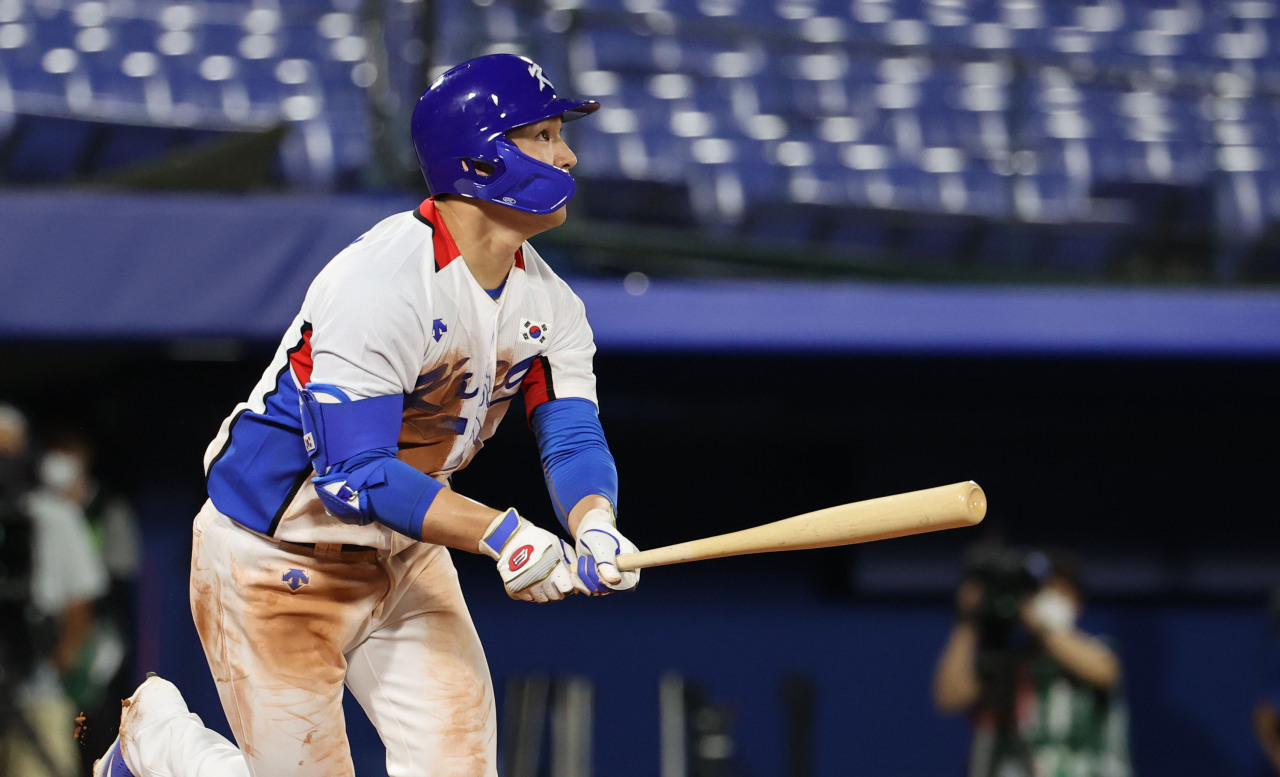 Oh Ji-hwan of South Korea watches his two-run home run against Israel in the bottom of the fourth inning of the teams' Group B game in the Tokyo Olympic baseball tournament at Yokohama Stadium in Yokohama, Japan, on Thursday. (Yonhap)
YOKOHAMA -- Few players, if any, on the South Korean national baseball team had as much to prove as shortstop Oh Ji-hwan at the Tokyo Olympics. And it only took him one game on Thursday to demonstrate his value as an outstanding fielder with pop.

Despite his credentials as among the best defenders in the Korea Baseball Organization (KBO), Oh's selection to the team in June was met with major criticism -- from those who still remembered the controversy that Oh's presence on the 2018 Asian Games team generated.

Oh was portrayed as the poster boy for all that was wrong with the national team baseball program back then. Detractors said Oh was only picked so that he could get his military service exemption with a gold medal, when he wasn't good enough to have played there. Sun Dong-yol, manager at the time, was panned for wasting a roster spot on an undeserving player and later resigned despite leading South Korea to gold. That Oh only had two at-bats while dealing with the stomach flu didn't help.

Despite calls to leave Oh off the team for Tokyo, new manager Kim Kyung-moon went with the sleek-fielding shortstop. Kim, who had once expressed reservations about picking Oh because of his baggage, defended his choice by saying Oh was the best defensive shortstop he could find.

And to think: It was Oh's bat, not his glove, that saved South Korea in its 6-5 win over Israel on Thursday.

Oh made solid, if not spectacular, plays on the field. At the plate, he went 3-for-3 with three RBIs. Oh hit a two-run homer in the bottom of the fourth to tie the game at 2-2, and then knocked in a go-ahead run with a ringing double in the seventh for a 5-4 lead. It would have stood as the game-winning run if closer Oh Seung-hwan hadn't blown the save with one out in the ninth.

After South Korea escaped with a 6-5 victory in 10 innings, Oh spoke about the significance of donning the national team colors.

"It always means a lot to be on the national team, and I've been preparing to perform at a level that makes me a worthy selection," Oh said. "Above all, I didn't think of anything else but winning this game. We're going to prepare the best we can to win the next one too." (Yonhap)