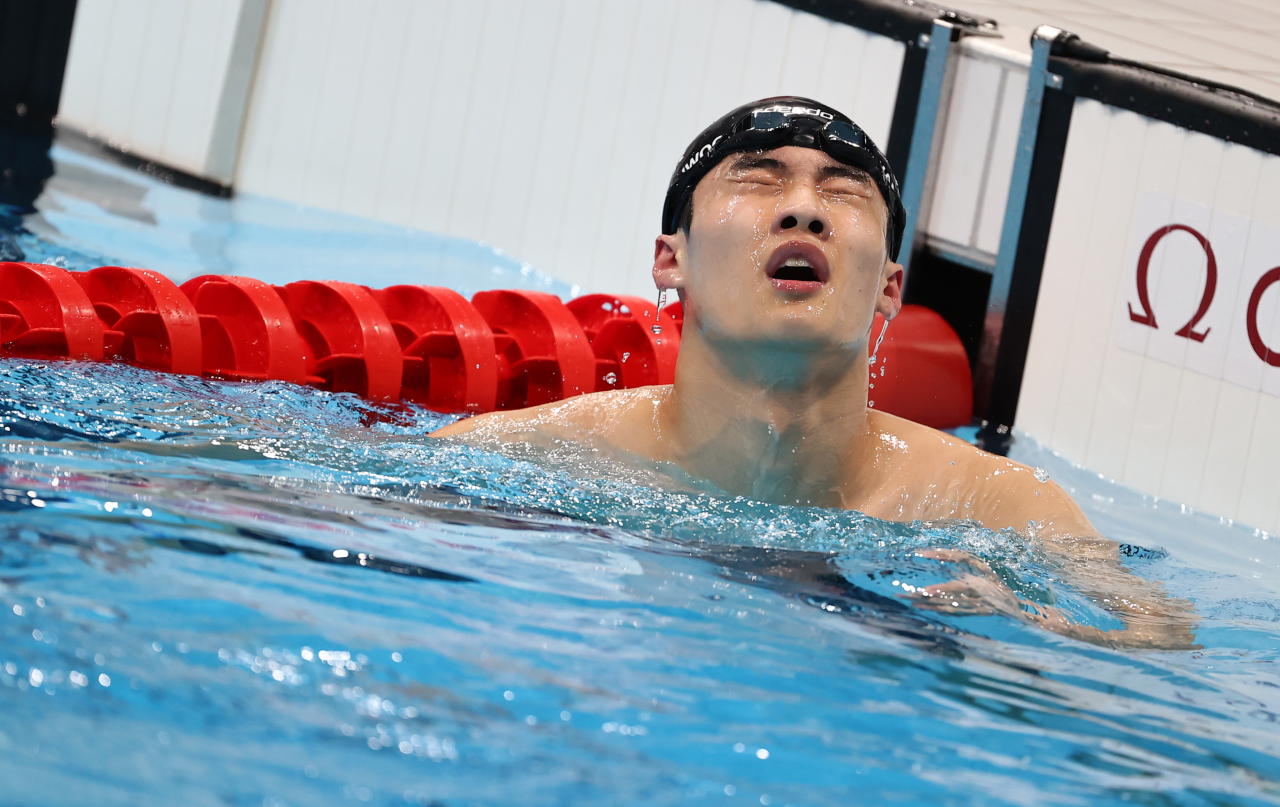 Hwang Sun-woo of South Korea reacts to his seventh-place finish among eight swimmers in the men's 200m freestyle swimming final at the Tokyo Olympics at Tokyo Aquatics Centre in Tokyo on Tuesday. (Yonhap)
TOKYO -- For a moment there, the swimming world held its collective breath Tuesday, as the South Korean teen swimmer Hwang Sun-woo was on a world record pace halfway through the 200m freestyle final at the Tokyo Olympics.

The 18-year-old ended up in seventh place among eight finalists at Tokyo Aquatics Centre. But he did have his 15 minutes or fame -- or rather, about 50 seconds of it.

Hwang had the fastest reaction time in the final with 0.58 second. He covered the first 100m in 49.78 seconds. No other finalist reached the halfway point in under 50 seconds.

Hwang said afterward it was part of his pre-race planning to try to take an early lead, but he overextended himself in that regard.

Hwang was surprised when informed by reporters of his first 100m split.

"Really? 49 seconds?" Hwang said. "I really did overpace myself. No wonder I was so bad over the final 50m."

Hwang became the first South Korean swimmer since Park Tae-hwan in 2012 to race in an Olympic final. He couldn't join Park as the only swimming medalists from the country, and Hwang said he was so exhausted during the final stretch that he had no idea how he even completed the race.

"I am relieved that I was able to finish the race," Hwang said. "I figured that I'd fall behind if I only tried to keep pace with others. So I wanted to jump in and take an early lead. Things went great for the first 150m, but I can now see why I was so bad over the last 50m."

Asked what was going through his mind at the 150m turn, Hwang said with a smile: "I didn't see anyone next to me. I thought, 'What's going on?' But then I had nothing left coming home."

"But it's all good. I am happy with that 49-second split," Hwang added.

There's no rest for the weary swimmer. Hwang is scheduled to race in the 100m freestyle heats at 7:17 p.m. Tuesday, in Heat 7 out of nine.

The best 16 from the field will progress to the semifinals for Wednesday morning.

"I won't be thinking too much," Hwang said. "I just have to do the things I've practiced and try to make the final in the 100m too." (Yonhap)