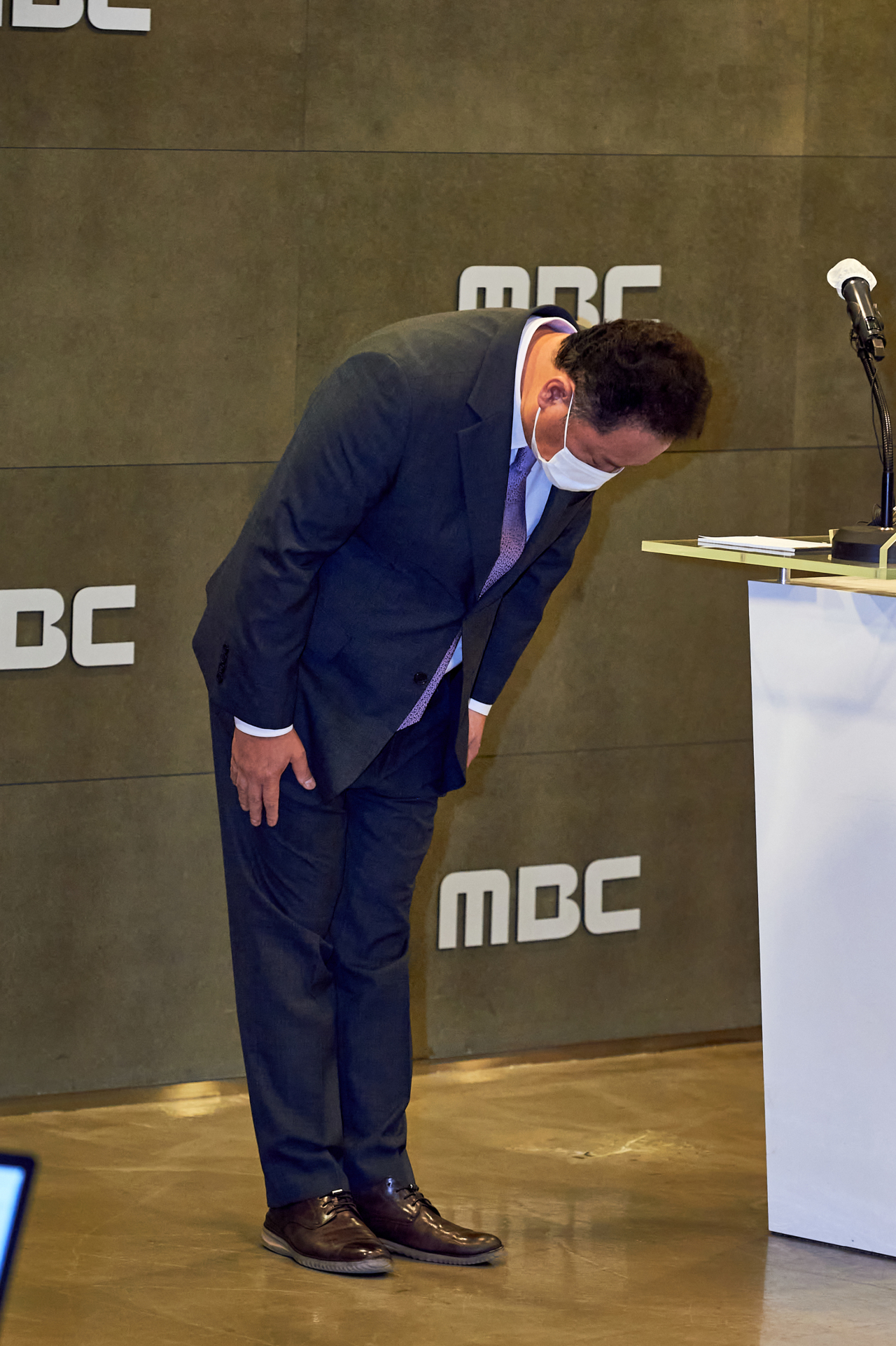 MBC President Park Sung-jae bows in apology during a press conference held Monday. (MBC)
Public broadcaster MBC apologized once again after it became mired in yet another controversy, this time concerning a caption that was used during its broadcast of the Tokyo Olympic men’s soccer game on Sunday.

“Today, I am standing in front of you to publicly apologize for undermining the Olympic spirit of friendship and mutual respect. MBC used offensive images and captions during its coverage of the Tokyo Olympics opening ceremony and another inappropriate caption was used while covering a soccer match between South Korea and Romania on Sunday,” Park said. “As the chief executive of MBC’s content, I offer my deepest apologies with my head down to the disappointed viewers and for making such inexcusable mistakes.”

On Saturday, MBC posted a formal apology in Korean and English on its website for its misconduct while airing the opening ceremony on Friday. However, a similar incident occurred Sunday when the broadcaster showed a caption that read “Thank you, Marin!” referring to Romanian defender Rajvan Marin’s own goal, during the halftime commercial break.

The second incident, occurring a day after Saturday‘s apology, further sparked outrage online and drew backlash from both domestic and foreign media.

“I have sent letters to the Ukrainian Embassy and the Romanian Embassy in Seoul. Because the embassy staff are working from home due to the COVID-19 pandemic, MBC sent the apology via email,” Park said. As Haiti does not have an embassy in Seoul, the broadcaster was unable to send a letter there, Park added, referring to countries also offended in Friday’s incident. “I would like to take this opportunity to apologize once again to the countries concerned,” Park said.

While recognizing the seriousness of the matter and promising not to repeat the mistake again, Park did not discuss concrete follow-up measures.

“During the company’s first investigation, we found that the fiasco was not caused by one employee and members are jointly responsible. Because we are in the middle of the Tokyo Olympics, I believe the company needs more time to conduct a thorough investigation, identify those who are responsible and take appropriate actions.”

The MBC chief said he will reexamine the production system and promised to ensure all of its content respects universal values and cultural diversity.