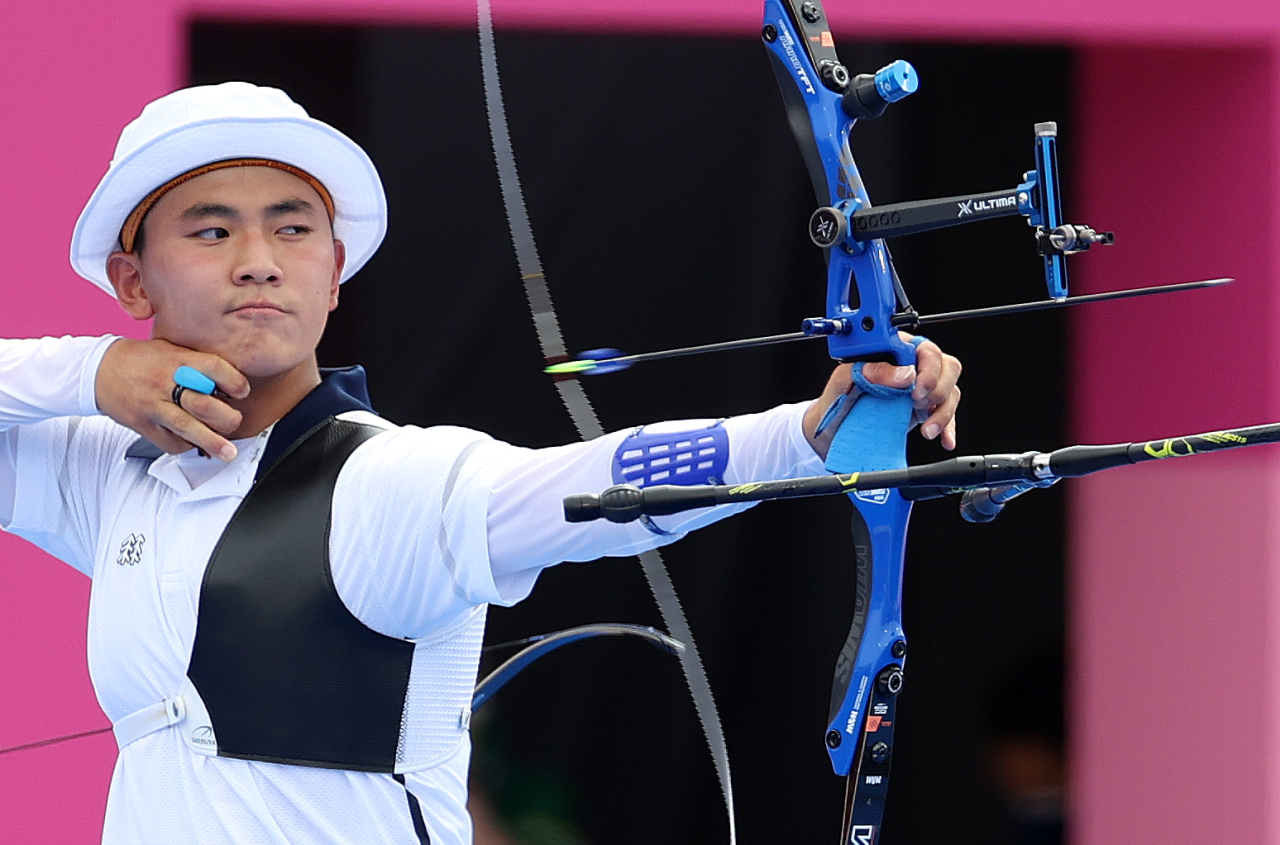 Kim Je-deok of South Korea competes in the final of the men's archery team event at the Tokyo Olympics at Yumenoshima Park Archery Field in Tokyo on Monday. (Yonhap)
TOKYO -- South Korean teenage archer Kim Je-deok screamed and fist-pumped his way to top of the Tokyo Olympic podium for the second time in three days Monday, adding the men's team gold medal to the mixed team event title from the weekend.

His voice hoarse from all the yelling, Kim teamed up with veterans Oh Jin-hyek and Kim Woo-jin for the men's team gold over Chinese Taipei at Yumenoshima Park Archery Field on Monday.

Kim, 17, is now the second double gold medalist from South Korean archery in Tokyo. An San became the first on Sunday when she won the women's team title, a day after joining forces with Kim Je-deok for the mixed team gold.

The success of the South Korean female archers is well documented. There have been several other double gold medalists from South Korea on the women's side. But Kim is only the second man to win two gold medals at a single Olympics, joining Ku Bon-chan, the team and individual champion from 2016.

And Kim now has a chance to become the first triple gold medalist in men's archery with the individual event starting Tuesday.

Kim shot to instant stardom on Saturday with his fiery display of emotions during the mixed team competition. His screams -- Kim mostly yelled "Let's go Korea!" or some variation of that -- were refreshing in a sport that seems to reward cool, calm and collected athletes.

After the mixed team gold, An San said how Kim helped calm her nerves with his battle cries.

And as the youngest member of the men's team, Kim continued to play the cheerleader during Monday's run to the gold medal.

But he did more than his part with his bow and arrows. In the final, Kim hit the perfect 10 with four of his six arrows. And in the nail-biting shoot-off against Japan in the semifinals, Kim struck almost the dead center of the target to send South Korea to the gold medal match. (Yonhap)