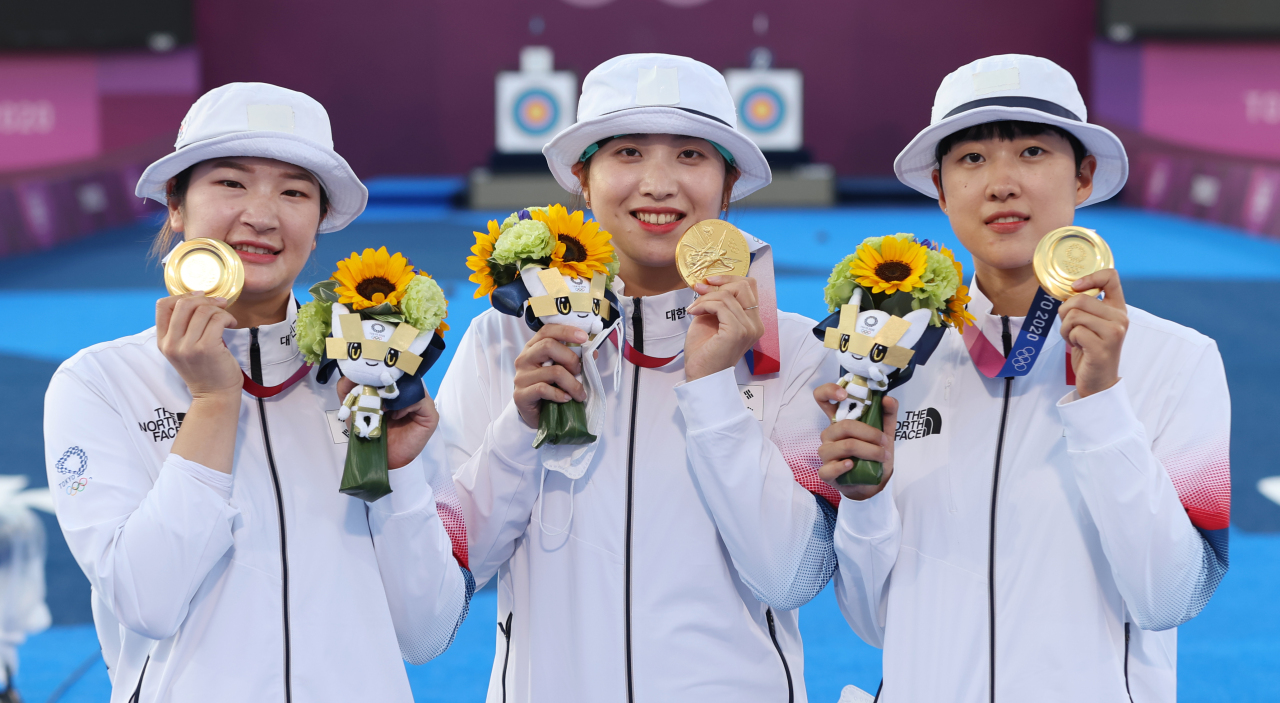 South Korean archers Kang Chae-young, Jang Min-hee and An San (L to R) pose with their gold medals from the women's team event at the Tokyo Olympics at Yumenoshima Park Archery Field in Tokyo on Sunday. (Yonhap)
TOKYO -- South Korea has dominated archery in the Olympics the way few other countries have in other sports.

This leads to the question: Why is the country so good at archery?

Theories abound, and gold medalists in Tokyo say it's due to transparency in national team selection, and the internal competition that ensures the survival of only the cream of the crop.

Meritocracy is an ideal concept that doesn't always apply to sports. Nepotism and favoritism can sneak their way into the picture. Maybe a coach likes a certain athlete more than another, or the coach has that ever-ambiguous gut feeling that one athlete will outperform others.

There's no room for that in South Korean archery.

"I think we have a transparent selection process," said An San, the double gold medalist from the mixed team and women's team events.

To further elaborate: When the Tokyo Olympics were postponed by a year in March 2020, the Korea Archery Association (KAA) was still in the midst of the multistage Olympic trials. Once the calendar flipped to 2021, the KAA didn't simply give out Olympic spots to those in position to qualify in 2020. Wanting to ensure the best archers of 2021, not 2020, would represent the country in Tokyo, the national governing body staged the Olympic trials from scratch.

An, along with Kang Chae-young and Jang Min-hee, survived the national team trials gauntlet often described as more difficult than the Olympics, given the depth of South Korea's archery talent. It's become a cliche, but it's not entirely wrong either.

"In Olympic trials, we compete against archers who are extremely close to one another in terms of talent level," Kang said. "And because we go through so many rounds in the trials, we don't get jitters any more. Archers can get nervous competing at the Olympics, but if they think about how they made it through the Olympic trials, then they should be just fine."

The archers also thanked the KAA for creating a training environment conducive to success in the Olympics, literally.

The KAA built a replica of the Olympic venue, Yumenoshima Park Archery Field, inside the Jincheon National Training Center in Jincheon, about 90 kilometers south of Seoul. And to prepare the archers against windy conditions in Tokyo, the KAA set up another training facility on a southwestern island. (Yonhap)

"They built an Olympic-like environment for us, and we trained like we were competing in the Olympics," Kang said. "Lights never went out at our training site." (Yonhap)